Justice in Guatemala: What Happened to the Rios Montt Trial, and Where Can it Go from Here? 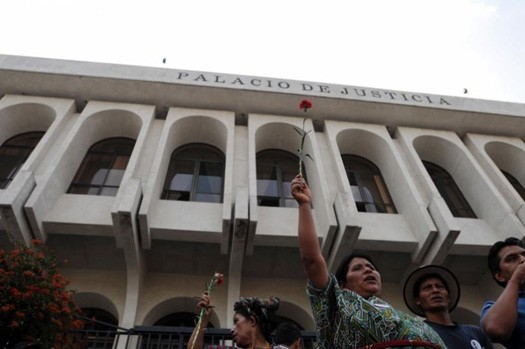 For the past five weeks, former dictator of Guatemala General Efrain Rios Montt has been standing trial for genocide and crimes against humanity. He and his co-accused, former military intelligence chief Jose Mauricio Rodriquez Sanchez, are charged with responsibility in systematic massacres of Guatemala’s indigenous population during the country’s civil war.

After decades of efforts by lawyers, victims groups, and civil society, justice for Rios Montt finally seemed to be in reach. With a verdict expected in a matter of days, a dramatic turn of events interrupted the trial: in a move unseen previously in the legal world, a lower court motioned to annul the trial proceedings, on the basis of an appeal lodged 17 months earlier. However, the presiding judge in the trial rejected the motion as illegal, an announcement that was met with bursts of cheers and applause from the courtroom gallery. A number of motions and countermotions are now being decided by the Guatemala’s Constitutional Court midst a tense political atmosphere.

To discuss this chain of controversial upsets in the Rios Montt trial, ICTJ Communications Director Refik Hodzic spoke with two transitional justice experts who have just returned from the courtroom in Guatemala City: Susan Kemp, prosecutions consultant for ICTJ, and Marcie Merksy, Director of Program Office. Informed by extensive work in both criminal justice and Guatemala, they offer an analysis of the dramatic events of the past week, discuss the legal and political complexities of the case, and consider possible scenarios that could develop in the coming days and weeks.