Women’s Experiences of Dictatorship in the Gambia 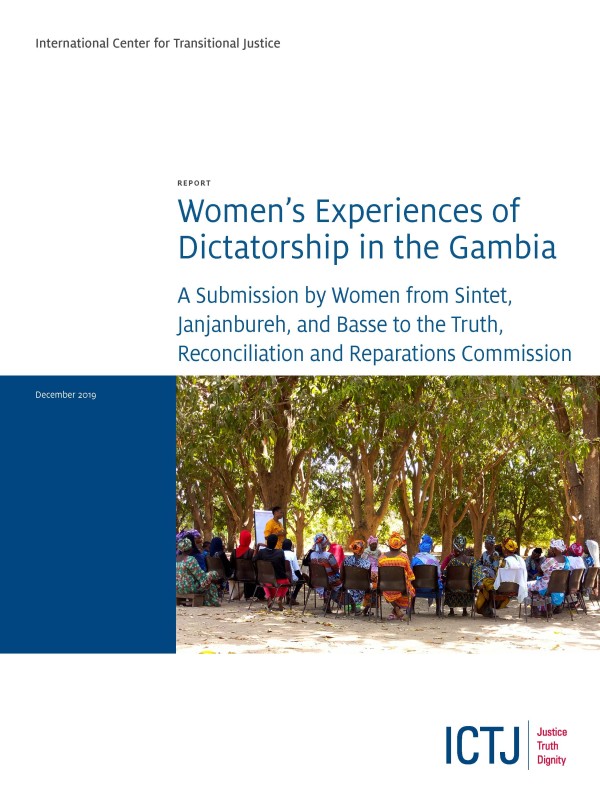 Since the Truth, Reconciliation, and Reparation Commission (TRRC) began public hearings in January 2019, Gambians have been transfixed by perpetrators’ confessions and shocked by the revelations of abuses committed during the former President Yahyah Jammeh’s 22-year rule. “We knew bad things happened,” one Gambian court official said, “but we didn’t know how bad.” At the direction of Jammeh, state security forces, shadowy paramilitary groups, and the president’s elite death squad, known as the “jungelers,” carried out arbitrary arrests, torture, forcible disappearances, extrajudicial executions, intimidation, and various forms of exploita- tion. Anyone who dared oppose Jammeh or criticize his government risked arrest, arbitrary detention, torture, forcible disappearance, and death. Gambians lived in a climate of fear where injustice and impunity prevailed.

However, an important part of the country’s narrative has not yet come to light or been publicly acknowledged: the experiences of women. Despite comprising over half the Gambia’s population, by the end of its ninth session the TRRC had only heard testimony from 27 women out of a total 143 witnesses and victims.

This report is an effort to break that silence and bring forward women’s voices to shed light on the violations they have suffered under Jammeh’s dictatorship and their enduring impact on their lives and those of their families.

Working through local women’s groups and mothers’ clubs, ICTJ facilitated a series of consulta- tion workshops and talking circles where women could learn about the truth-seeking process and, once trust was built within the group, speak about their own experiences, their hopes for a new Gambia, and their recommendations for the TRRC. Underlying this approach is the “do no harm” principle and an effort to ensure that women who want to share their stories receive ongoing support and accompaniment. To that end, ICTJ emphasized to the women that their participation is purely voluntary. The choice not participate must be respected, and those who wish to participate have a right to decide how and under what conditions.

Following the TRRC’s public hearings on sexual and gender-based violence (SGBV) held in October 2019, this report presents the stories and viewpoints of women who are not comfort- able giving public testimony because of numerous risk factors, but who nevertheless insist that their experiences matter and must be acknowledged at the national level. Reflecting the general sentiment among the women consulted, one survivor emphasized, “our stories should be told to prevent the repetition of the violations that happened in the former government of Yahya Jammeh.”

This report also serves as a reminder to the TRRC to seek alternatives to the public hearing for- mat and to open new channels for women to safely and anonymously share their experiences, so that women’s perspectives can be fully integrated the country’s reckoning with its troubled past. Through the TRRC process, including its final report, reparations program, and recommenda- tions for necessary reforms, the Gambia is at a historical crossroads where it has the chance to break the cycle of violence against its citizens, women in particular, and build a culture of respect and dignity for all Gambians. Through this report, women join their voices to ask that these violations never happen again and to offer recommendations to improve the protection of women’s rights, facilitate acknowledgment and healing, and provide reparations for all women victims.