Ending Gender Violence in Elections: Inclusion of Women in Kenyan Politics and the National Dialogue Process from a Transitional Justice Perspective 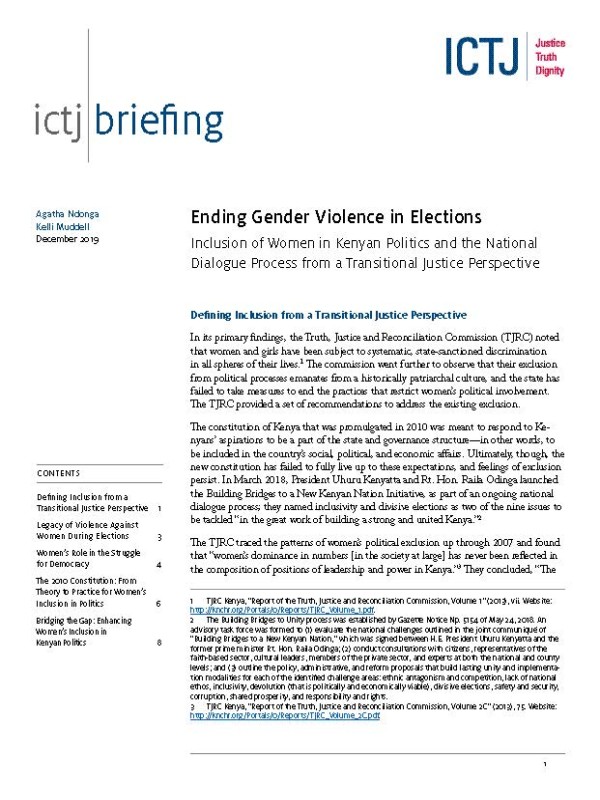 In its primary findings, the Truth, Justice and Reconciliation Commission (TJRC) noted that women and girls have been subject to systematic, state-sanctioned discrimination in all spheres of their lives. The commission went further to observe that their exclusion from political processes emanates from a historically patriarchal culture, and the state has failed to take measures to end the practices that restrict women’s political involvement. The TJRC provided a set of recommendations to address the existing exclusion.

The constitution of Kenya that was promulgated in 2010 was meant to respond to Kenyans’ aspirations to be a part of the state and governance structure—in other words, to be included in the country’s social, political, and economic affairs. Ultimately, though, the new constitution has failed to fully live up to these expectations, and feelings of exclusion persist. In March 2018, President Uhuru Kenyatta and Rt. Hon. Raila Odinga launched the Building Bridges to a New Kenyan Nation Initiative, as part of an ongoing national dialogue process; they named inclusivity and divisive elections as two of the nine issues to be tackled “in the great work of building a strong and united Kenya.”

This paper highlights the need to overcome the political challenges women face in Kenya: their ongoing exclusion from political leadership; the continued violence against them during electoral contests, which is becoming normalized; and their inability to ascend to leadership positions in the country.