‘You Must Hear Us, Because We Have a Lot to Say’ Youth Leaders Call for Reparations in Cote d’Ivoire

After consulting nearly 2,000 of their peers, youth activists in Cote d'Ivoire present their reparations policy recommendations in a special event on Friday. 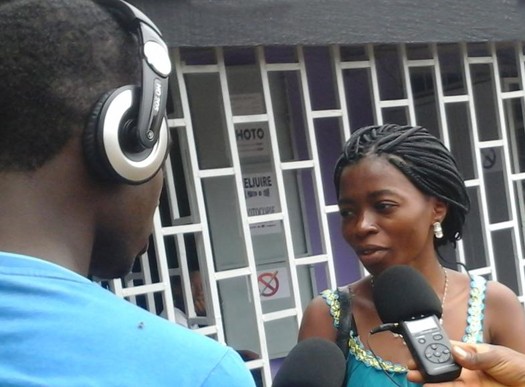 The young activists behind Cote d’Ivoire’s Justice and Peace Action Network (Le Réseau Action Justice et Paix, RAJP) have spent three years talking. Talking to each other about their experiences during the violence that has plagued the country since 2000. Talking to their peers about a history that has otherwise been silent. Talking to their community about how to engage the country’s youth in reparations and build a lasting peace.

In an effort to include young people in the transitional justice process in Cote d’Ivoire, the youth of RAJP consulted nearly 2,000 of their peers since 2013. On Friday, they will demonstrate the power of these conversations in a report to their communities and to policy makers at a public forum hosted by ICTJ and UNICEF in Abidjan. They will discuss their recommendations for youth reparations and use interviews, spoken word and hip hop to explore the experiences of young Ivorians during and after the violence that has gripped the nation since the turn of the century.

Conflict began in Cote d’Ivoire in 2000, when political leaders invoked ethnicity and nationality to bar Alassane Ouattara, the main opposition leader, from running for president. When Laurent Gbagbo was named president violence broke out across the country. It continued in 2002, as a troop mutiny sparked by ethnic tensions grew into a rebellion, killing thousands.

Violence once again engulfed Cote d’Ivoire following 2010’s presidential election, which pitted Ouattara against Gbagbo. Gbagbo lost but refused to step down, and the ensuing crisis had an outsized impact on young people. Whether they endured violence directly, lost family members or participated in the violence themselves, the country’s youth suffered immensely during the conflict and its aftermath.

Even as peace took hold, the economic and social tensions that led youth to get involved in the conflict remained. Compounding these issues, the country’s efforts for accountability and redress have been implemented slowly: reparations are ongoing and efforts to unveil the truth about atrocities and prosecute the perpetrators have lacked the necessary political support to be put into motion.

RAJP emerged in 2013 as a response to this slow institutional process. 14 youth associations with more than 5,000 members nationwide began to coordinate their efforts to talk about young people’s experiences during the conflict. These young people comprised a wide cross-section of Cote d’Ivoire’s ethnic, gender, linguistic and regional divisions. They worked together to discuss their involvement in the violence, address the country’s legacy of conflict and prevent another wave of violence. ICTJ helped them organize into a formal coalition, hosting a series of training sessions and facilitating the young activists’ work.

The youth leaders came up with their own strategies to engage their peers and society at large in a public conversation about the painful past, and ICTJ helped put them into practice. Among many other initiatives, the RAJP produced four short radio programs, each reflecting on a different aspect of youth involvement in the violence and civil society.

As the 2015 presidential vote approached – the first since the bloodshed of 2010 – RAJP also worked with Ivoire Justice to teach young people how to participate in the election process peacefully. Their work with youth contributed to the peaceful elections in 2015, which were deemed transparent and credible by observers.

Friday’s event celebrates the Network’s impactful work while also looking forward. We talked to four RAJP members. Here’s what they had to say about what they went through, why youth need to be heard in Cote d’Ivoire and what the government should do to redress them:

My mother was forcibly dragged away from right under our eyes and taken to a small hut with those armed men, from which she came back in tears.

I have a painful memory of those episodes. Then my father lost his job, with a family to take care of.

[In 2010, KOUADIO was living with a foster family when violence erupted once again.]

During the events of 2010 I was a student in Saïoua (western Cote d’Ivoire) and was abandoned by my foster family because of my ethnicity. At the end of the post-electoral crisis it was like I had a knot in my throat: I wanted to talk. So when I had the opportunity to join other young people, I jumped on it. We wanted all these people who were silently suffering to be able to express themselves through our association.

We had long waited for the government to support us, but have yet to see anything. I had this impression of having been forgotten by the government in the face of my family’s difficulties. Young people do not figure clearly in the government’s reparations plan, so we must take matters into our own hands. That’s where the RAJP offers us a platform for expression. The consultations begun by the ICTJ fit within our outlook. Thanks to the work of the ICTJ, I understood the reparations process and I now see that organizations take our situation to heart. Crucially, the ICTJ has allowed us to organize ourselves with attention to the types of abuse suffered --a person who has been raped requires a different approach from a person who has suffered an amputation.

For us, the event where the report will be presented will be an opportunity to make our situation and our expectations known to the political decision-makers. The fact that on that day we will be heard by the decision-makers is already a victory in itself. I believe that if all the young victims, and beyond that, all the young people of Côte d’Ivoire come together around the ideas of peace, reconciliation, and reconstruction, Côte d’Ivoire will be such a pleasant country to live in. The government must hear us, because we have a lot to say. We don’t want to become frustrated adults and a generation broken by silence and the weight of the pain.

I decided to approach other young victims, and that’s how I joined RAJP. Through this organization I want to give hope back to these young people who have lost all hope after the crisis in Cote d’Ivoire. I wish to express myself and give my point of view on the process of reparations for the youth and children, to share my personal experience with other victims. I want to take advantage of the opportunity to issue a call to young victims who are not part of RAJP to join the group and share their experiences.

Unfortunately, the authorities do not appear to assimilate the concerns of children and young victims into their plans. It is truly difficult for a victim like me whose parents don’t have any money to take charge of my own situation.

Thanks to the contribution of the ICTJ I have hopes that youth will be taken into account in the reparations process. Consultations were organized in my city, Korhogo, to make it possible for young victims to express themselves. I am really pleased to have participated in it and to hear other testimonies, which has helped me grow stronger.


When the opportunity came for me to join RAJP I didn’t hesitate for a second. I found a foster family there, people like me who knew what I’d been through, and I gradually came to feel less alone. Frankly, I don’t think that the government is doing much of anything for us young people.

When it came to attending ICTJ’s consultations, I was a bit reticent since other organizations had come through with similar experiences without any follow-up. Later I was surprised to see that we were being asked to validate a report on our own recommendations. I like the method used by ICTJ, which does what it can to listen to us, and allows us to express ourselves. I believe that this type of collaboration should continue.

When the ceremony is held for submitting the report, I would like the decision makers to follow the example of ICTJ. Even if the government doesn’t have the means, it must listen to us. It must apologize to us for what we experienced as children and youths. The government should help young victims to fend for themselves, it should be mindful of its prejudices. I also call on my young friends to let go of their rancor and join us in our movement. I would like to help raise the awareness of other young victims and get them to join us in the RAJP. I believe that Côte d’Ivoire can heal its wounds if the government agrees to listen to us, for we are the future.

Still, I tried hard to keep my affairs in order to ensure that I could cover my school fees. I joined the RAJP to have a greater perspective on how to approach my education. Thanks to the intervention of the RAJP I was able to discover organizations that take an interest in the situation of young victims, such as the ICTJ. The government doesn’t pay attention to us because we’re young. There are no measures for us. ICTJ organized consultations here in Duékoué to give us a chance to talk about our experiences. I was quite skeptical in view of the different forms of violence that took place among the communities --I wondered if the youth would really agree to get together and share their experiences. But after the consultations, all my doubts cleared up because the ICTJ did a remarkable job and I have regained confidence in the reparations process.

Thanks to the ICTJ today I’m seen in Duékoué as a man who speaks of social cohesion and peace. That has given me the opportunity to meet with youth. I am happy to be a leader in Duékoué, for it allows me to learn more and to reconcile the young people where I live.

We are awaiting the report with recommendations so that concrete actions can be taken to make reparations a reality. Reparations can take several forms. It may be symbolic in the form of an apology; it could be material and collective, such as building hospitals, schools, community cultural centers, and so on.

Now that the report with recommendations has been forwarded to the authorities, the State should take measures to help young people so that they can become socially reinserted, so that they can have an opportunity to participate in income-generating activities and gain financial independence.

I ask the government to assist the victims so that they can become alive again and blossom.

PHOTO: Members of RAJP speak with other young people about their experiences during and after Cote d'Ivoire's violence. (RAJP/ICTJ)