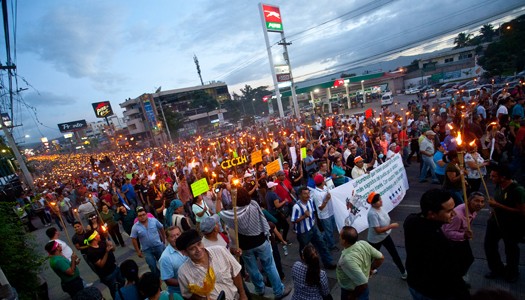 Facing corruption charges, Guatemalan President Otto Pérez Molina recently resigned from office and less than 24 hours later was indicted for corruption, illicit association, and bribery. The euphoria caused by this victory of the justice system has spilled over to other Central American countries like Honduras and El Salvador, where citizens are taking to the streets to demand justice and an end to corruption.

The case against Molina was spearheaded by the International Commission against Impunity in Guatemala (CICIG), an independent, international body charged with supporting the investigation and prosecution of serious crimes. CICIG’s success in combatting impunity in Guatemala has led to calls for the establishment of similar commissions in other Central American states afflicted by high levels of corruption and crime.

To discuss the potential impact of Guatemala’s recent strides against impunity on other countries in the region, we spoke with Carlos Dada, an award-winning journalist and a founder of the Salvadoran digital news outlet, El Faro. Dada has reported on corruption and violence in Central America for over 17 years and founded El Faro to promote independent, in-depth reporting in El Salvador.

You recently wrote an in-depth article for The New Yorker detailing recent developments in Guatemala. How did you feel as you were witnessing what was happening? Did you ever expect that the Guatemalan justice system would be able to prosecute a sitting head of state?

It was of course surprising for everybody. We have never seen, I think, a sitting president in Central America or in Latin America brought to justice before he steps down. So in that sense, yes, it was a surprise. The reasons for his ouster were not a surprise, because since the establishment of CICIG it is precisely the judicial system that is the center of institutional reforms in the country, and the place where battles against corruption are taking place.

We’ve seen how over the summer, in Honduras and El Salvador, people have been regularly demonstrating against corruption and impunity. Some of those demonstrations have been massive, especially in Honduras. These protests started more or less at the same time as the corruption investigation by CICIG and the prosecutor’s office in Guatemala was made public. Is there any connection between the movements in Honduras and El Salvador, and the one in Guatemala?

I wouldn’t say that there is any organic connection between these movements, but I would say there are some points in common, which are of course the weakness of the judicial systems in Honduras and El Salvador, in addition to what CICIG in Guatemala has proven in recent years, which is the ability to help a country clean up a very corrupt judicial system through the prosecutor’s office. In that sense, yes, there’s that in common. A few days before the last corruption scandal broke in Guatemala, a US assistant secretary of state came to the region and—since the Guatemalan government needed to renew CICIG’s mandate—said that the United States fully backed the role of CICIG, and went even further by saying that the Unites States also believes Honduras and El Salvador should have some kind of CICIG in their own countries.

This happened when in Honduras a huge corruption scandal in the social health system had just been uncovered, and so people went to the streets to demand a CICIG for Honduras. El Salvador is a very different case because its political system is very polarized. There are many more strings to be pulled by politicians to control some kind of public pressure. But in the case of Honduras it has worked and so that’s the connection between these three countries. What Guatemala has achieved has inspired people in the other countries, who are demanding justice in their own lands.

Even if El Salvador, Honduras, and Guatemala are geographically very close, they all have different political histories and social backgrounds. Yet transitional justice has its roots in Latin America, and more specifically it was a criminal case from Honduras, the disappearance of a university student, Velásquez Rodríguez, that is considered by many as the cornerstone of transitional justice. What in your opinion are the current challenges that might make it difficult to strengthen the fight against impunity in El Salvador and Honduras?

Corruption is endemic in all of these countries. In Honduras they have lived for a century with two main political parties—both right-wing parties supported by the army—which in a way prevented the country from having a strong revolutionary movement in the eighties, as opposed to Guatemala and El Salvador.

In El Salvador, after the war and peace agreements, the extreme leftist forces, which were the guerillas, became a very strong political party—the FLMN (Farabundo Martí National Liberation Front)—which is now in power. On the other hand, the extreme right-wing party—ARENA (Nationalist Republican Alliance)—which was founded by members of death squads, governed El Salvador for 20 years until 2009. These two parties are not only strong but also at opposite sides of the political system, which means that whenever you stage a protest against the government—like what has been happening these past weeks in the “Guatemalan fever”—the government just claims that these are destabilizing forces that come from the right. That is enough to bring their supporters against the protest and prevent it from really becoming a popular movement, as opposed to what is happening in Guatemala.

In Guatemala there are no strong political parties. Political parties are just vehicles for politicians to run for office, and if they lose, the party usually disappears. So there are not strong political institutions in Guatemala as there are in El Salvador. Those are basically the main political differences in these three countries. Yes, Honduras had cases of people disappearing in the midst of strong military repression in the eighties. But right now, since the coup d’etat in 2009, there have been hundreds of disappearances that no one is held accountable for and that keep happening. From the coup d’etat onwards in Honduras the political system has been slowly changing and it is in this constant transformative phase.

Many people in Central America are now asking for the creation of a commission similar to CICIG in their own countries, that is, a hybrid body supporting the national prosecutor’s office in their investigations, created and overseen by the UN and the Guatemalan government. Would that kind of approach work in El Salvador and Honduras? What should the role of the international community be in the fight against impunity and corruption in Central America?

It’s hard to say or to predict what is going to happen, but due to the protests and the pressure of new political opposition parties in Honduras, the government invited the Organization of American States to examine the possibility, if not of assistance for Honduras, at least for the appointment of a special commission with international prosecutors and judges, which would help clean the corrupt judicial system. Is that going to go anywhere? I’m crossing my fingers that it is, but it’s hard to know. Meanwhile, in El Salvador the position is that we are independent, sovereign and strong enough to solve our own problems, so nothing is moving in that way.

When the judicial systems and the political systems are so corrupt, as is the case in Guatemala, Honduras, and El Salvador, there are very few people with enough credibility to prosecute corruption. So what CICIG first brought to Guatemala was credibility. Second, I would say it sent the message to the Guatemalan people that they deserved a good judicial system and that it was worth fighting for. Third, they put a lot of pressure on the political system to bring in a really credible, independent, and honorable person to start reforming the prosecutor’s office with the commission’s support. That is what allowed the judicial system in Guatemala to go into this transformative phase that has now resulted in the indictment of a sitting president.

I assume you are talking about Claudia Paz y Paz, the former prosecutor general?

Yes, you are right, and the prosecutor just before her as well. That was also the result of this pressure from CICIG to bring new people who have credibility to the judicial system, instead of the same people appointed by the same corrupt political parties. This is what allowed what we’ve seen to take place.

So what will it take to allow for something like this in El Salvador? Well, if they don’t want a CICIG, something else will have to happen, because society there can’t go on anymore the way it is going. El Salvador is about to explode. It is now the most violent country in the world and Honduras is following really close. People get tired of this, so I know that what has been happening in Guatemala is forcing the two political parties to talk about bringing someone honest and credible to the prosecutor’s office, because they don’t want to be forced to allow the establishment of a CICIG in El Salvador. Because they see it as a direct result of pressure from Washington, so it goes against the state’s independence or sovereignty. But they need to do something to bring credibility to such a key institution.

Listen to our podcast with ICTJ Director of Programs Marcie to learn more about recent developments in Guatemala.

PHOTO: Protesters in Honduras march in support of a commission to fight impunity and corruption. (rebreve/Flickr)