Nearly three years after violence in Cote d’Ivoire claimed the lives of over three thousand civilians and displaced hundreds of thousands, victims have yet to receive adequate reparation for the harm they suffered. ICTJ convened victims’ organizations, civil society, government officers and others to assess how the country should move forward to ensure victims see their right to reparation fulfilled. 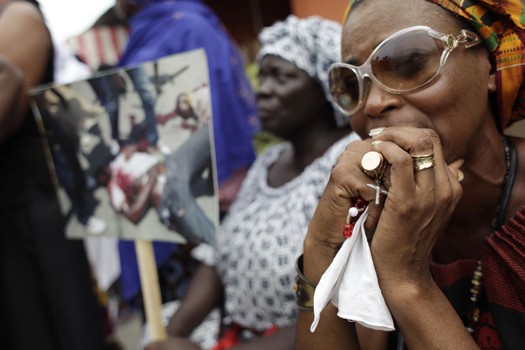 Nearly three years after violence in Cote d’Ivoire claimed the lives of over three thousand civilians and displaced hundreds of thousands, victims have yet to receive adequate reparation for the harm they suffered.

Despite significant economic progress, Ivorians are still feeling the tremors of the civil war, making the need for redress urgent: victims remain vulnerable to abuse due to the fragile security and economic conditions in the country.

“Victims in Cote d’Ivoire have been waiting a long time to receive essential acknowledgement of the harm they suffered, and support,” said Mohamed Suma, Head of ICTJ’s Program in Cote d’Ivoire. “This is partly because the government has been too slow in including victims to assess what kind of reparations they need.”

Aside from continual political stalls, a missing link is the development of a comprehensive design for reparations programs that would meet the specific needs of victims. In December 2013, ICTJ convened victims’ organizations, civil society, government officers and other international organizations working in Cote d’Ivoire to assess the efforts towards reparations so far, and to determine how the country should move forward.

Jointly hosted with Cote d’Ivoire’s Ministry of Solidarity, Family, Women and Children and the National Program for Social Cohesion in Abidjan, the seminar examined the consequences of violations committed during the post electoral crisis of 2010, as well as the previous decade of violence and repression.

The Struggle to Provide Redress

The violence that followed Cote d’Ivoire’s disputed presidential elections in 2010 claimed the lives of over three thousand civilians. Over a million civilians fled their homes, and vulnerable groups such as women and children were subjected to killing, torture, rape, and abduction.

Following the post-elections crisis, the Government initiated transitional justice processes and established specific authorities such as the National Commission of inquiry (CNE), the Special Cell of Investigation (CSE), the Dialogue, Truth and Reconciliation Commission (CDVR). These institutions, while each with different mandates, all aim to ensure truth, justice, accountability, reparations, and non-recurrence.

Victims anticipated that reparations would come through the work of the CDVR, which had a mandate to recommend reparative measures for victims.

“Through its consultation and statement taking processes, it was expected to assess the conditions and demands of victims, as well as make recommendations for a reparations policy,” said Suma. “Instead, we saw that victims were not included in the process.”

In another move that raised hopes for justice in the country, in May of 2013 the Government established the National Social Cohesion Program (PNCS), which is designed to support community rehabilitation initiatives and socio-economic integration; and assist vulnerable people affected by the conflict. Despite this, no funds have been allocated to the PNCS, and no concrete plans to provide reparations to victims have been put forward.

Currently missing in the country’s path towards a reparations program are the definitions of the criteria and parameters that such a policy would embody.

In an effort to solidify consensus around these criteria, ICTJ’s seminar in Abidjan—led by ICTJ’s Cristian Correa—aimed to help ensure societal input into the design of this framework.

During the event, victims and civil society groups engaged with government representatives on a number of critical issues, including defining categories of victims, time frames of violations, and special considerations with regards to women and children.

Participants discussed diverse forms of reparations, which should be based on victims’ current needs, including scholarships for children, access to health care and psycho-social support, livelihood support for widows, ceremonies of acknowledgment, and purification of sacred sites.

“Reparations are not just the delivery of certain goods; reparations programs need to be conveyed through symbolic and verbal means as well,” said Cristian Correa, Senior Associate for ICTJ’s Reparative Justice Program.

He stressed the importance of reparations being accompanied by the truth-seeking process, including what happened but also why it happened, acknowledging wrongdoing, as well as of a balanced strategy on criminal justice and guarantees of non-recurrence. All these should be done through a policy implemented by the government and funded mainly through the national budget. This, stressed Correa, would express the state responsibility and commitment to victims’ rights to reparations.

In the discussion on defining categories of victims, it was stressed that reparations should be based on the crimes suffered and not on the allegiance of victims to any side in the conflict

Mr. Coulibaly Mamadou, representative of Cote d’Ivoire’s Minister of Solidarity, Family, Woman and Child, emphasized that the ministry was committed to working with civil society and victims’ groups. “Consensus of all the stakeholders is necessary to achieve this mission,” he said.

In order for these needs to be recognized, however, Ivorians need concrete signals from the government that its transitional path will be victim-centered.

“This way, whatever policy emerges from consultations, the country can be guided by the needs of those who suffered severe harm during the violence.”

In the next two years, ICTJ will work with victims’ organizations in the regions of Duekoué and Bouaké, as well as in Abidjan, to encourage the continuation of a participatory process.

Photo: Women's organizer Betty Nguessan, right, grieves, alongside a woman holding a picture of a man killed in post-election violence, during a march 'of mourning' for all those killed, in the Treichville neighborhood of Abidjan, Ivory Coast Tuesday, March 8, 2011. (AP)
Africa
Cote d’Ivoire
Reparations