In Côte d’Ivoire, Consultations Aim to Ensure Victims Have a Say on Reparations Policy

ICTJ recently facilitated consultations on reparations policy between victims of the Ivorian crisis and the National Commission for Reconciliation and Compensation for Victims in Abidjan, Côte d’Ivoire. 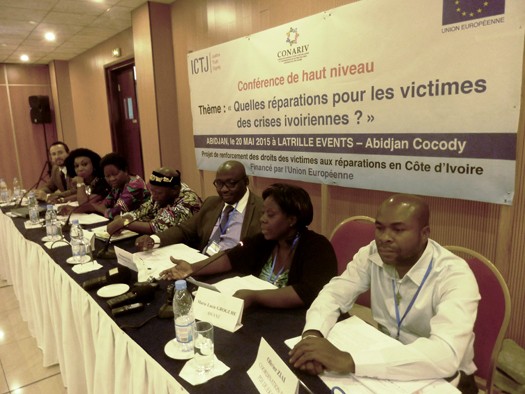 Over the past year, ICTJ has worked with victims of the Ivorian crisis to promote their collective agency and ensure that reparations measures formulated by the government address the various harms they have suffered. Indeed, for reparations to have meaning, they must recognize victims’ agency and respond to their specific needs.

On May 20, ICTJ held a high-level conference in Abidjan, in cooperation with the National Commission for Reconciliation and Compensation for Victims (CONARIV), to provide victims with a platform to present their policy recommendations on reparations to policymakers, local civil society and international partners.

Victims’ representatives made concrete proposals, described the harms they had experienced and detailed the consequences suffered by victims. They asked for specific forms of redress that often included those who suffered directly and their family members. Their presentations illustrated the magnitude of the harms suffered and underscored the importance of effectively and quickly implementing reparations.

“As the conference showed, the government must involve victims in the process of developing and implementing its reparations program, because without their voices and inputs, there won’t be a credible process,” says Cristián Correa, Senior Associate in ICTJ’s Reparative Justice Program. “Victims’ participation should be sustained, to ensure they both inform and are informed about the process.”

Mapping Victims to Ensure Their Participation

In March 2015, the Ivorian government took a significant step forward in addressing past harms by establishing CONARIV. CONARIV is responsible for producing a single list of victims and proposing reparations measures for their benefit. While CONARIV’s creation represents a significant opportunity, for it to truly succeed, it must actively engage with victims in the development and implementation of individual and collective reparations measures in a meaningful way.

One main concern is how to ensure that victims—or a representative sample—participate in the process. Such a sample needs to include organizations of affected and marginalized areas, rather than just human rights NGOs based in the capital city.

“For reparations to be implemented, it is key to have a strong civil society that represents different sectors of the society, knows about the policy, and can remain vigilant on the issues,” says Correa. “Most bodies in charge of making recommendations have a limited life span and really require outside organizations to keep the issues alive.”

ICTJ developed a mapping process of organizations located in areas affected during different periods of the crisis: Bouaké, the second largest city of the country; Duékoué and Bangolo, in the west; and Abobo and Yopougon, two major neighborhoods of Abidjan.

Special emphasis was placed on recognizing women victims’ voices throughout this process. During consultations, special sessions were held for women victims to define reparations measures that are both capable of overcoming obstacles women commonly face and are designed in ways to render them accessible.

The high-level conference in Abidjan was a chance to bring the ideas and voices of victims to policy makers and practitioners. The goal of the day’s activities was to include a wide variety of victims’ perspectives in proposals for the development of an official reparations policy.

More than 100 people attended the conference, and the discussions generated ideas that may allow for a transparent process for defining such policy. Indeed, victims’ ownership of the process was a central focus of the discussions.

Representatives made it clear that certain categories of victims should be prioritized, beginning with victims who were killed or disappeared, victims of sexual violence, and victims of physical harm including torture and those left disabled. Property damages or loss, though important, were considered as a second priority.

Victim’s representatives also suggested ways in which their proposed measures could be implemented by pointing out which areas lacked certain kinds of doctors, appropriate facilities for counseling or social centers.

The president of CONARIV, Monsignor Paul Siméon Ahouana, attended the conference and emphasized the importance of the centrality of victims in the reparations process—a message which was reiterated by the other commissioners.

“The discussions held at the conference have laid a solid foundation for the future, but much work remains to be done to ensure that victims’ voices will be reflected in a reparations process,” said Suma. “Victims have shown persistence in bringing their demands forward, and CONARIV showed a willingness to keep the dialogue going. The government should follow through with a similar commitment.”