In Cote d’Ivoire, avenues for education system reform are limited. To help youth find their voice, ICTJ and UNICEF facilitated an innovative truth-telling project led by Ivorian young people themselves. The result: an exploration of the unique experiences of young people during the conflict, told through radio broadcasts, public discussions and reports to government officials. 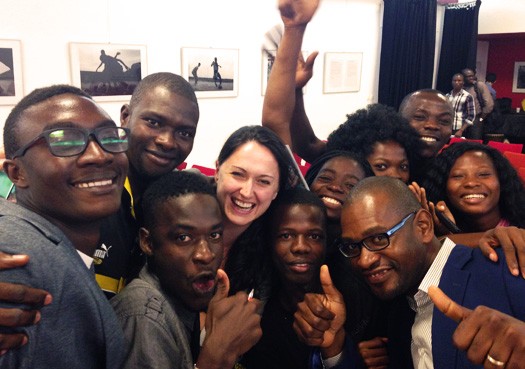 By Virginie Ladisch and Joanna Rice

In post-conflict countries like Cote d’Ivoire, where a genuine transition is lacking and narratives about the past are still politically contested, it is difficult, if not impossible, to introduce issues of accountability and democracy directly into the education system at the official level.

In 2013, ICTJ and UNICEF began a two-year project to create opportunities for youth to find their own voice within the country’s truth-seeking process.

The original project was to support the efforts of the Dialogue, Truth and Reconciliation Commission (Commission Dialogue Vérité et Réconciliation, CDVR), a national truth commission set up in 2011 to investigate violations, to engage children and youth, and to make the commission’s products more accessible to young people all over the country by integrating them into curricula.

The plan was to help the CDVR take statements from children and youth and to include their perspectives in the final report. ICTJ and UNICEF would then help CDVR incorporate the findings into schools and the broader education sector through the creation of educational materials.

However, in light of the realities of the political situation in Cote d’Ivoire, and the long-term nature of curricular reform, it soon became clear that the project’s objectives were not immediately feasible.

The CDVR — born in the absence of a real transition in power structures and emerging in a political environment where Ivorian President Alassane Ouattara maintained a tenuous hold on power — faced conditions hardly ideal for an equitable and inclusive examination of the past and the pursuit of accountability. It faced many challenges in fulfilling its mission, and in the fall of 2013 had to put its operations on hold for several months.

In response , ICTJ and UNICEF refocused the project around three goals. First, the project would now aim to facilitate innovative truth-seeking opportunities for youth, who as a group had been highly implicated in the war as perpetrators of violence and were also significantly overrepresented among victims. Second, it would try to open new communication channels between youth and authorities, as the hierarchical Ivorian political system allowed very limited voice for youth. Finally, the project would look for new opportunities to engage youth in reflection on their future in light of the past.

Under the new framework, a group of youth leaders, initially mobilized to engage with the formal truth-seeking process led by the CDVR, now held their own dialogues in circles of their choosing and gathered their peers’ perspectives on the country’s violent past through mediums that resonated with the youth themselves: hiphop, traditional music, poetry, and group dialogue.

Participants were drawn from the leadership of 15 student- and youth-run local NGOs, which had coordinated in a loose alliance of young activists promoting human rights and peacebuilding in Cote d’Ivoire for more than a decade. The organizations represent the full spectrum of Ivorian society, including high school and university student groups, Muslim and Catholic student groups, a child and youth workers’ association, two young women’s organizations, and an association of young conflict victims and jurists.

Youth leaders began collecting their peers’ experiences of the conflict and the period that followed. To help them, the ICTJ-UNICEF project gave each group seed money to organize peer truth-telling events within their networks.

Soon, the leaders decided to link these sessions. Muslim and Christian student organizations began sharing with each other their experiences of the war, a time when these communities were pitted against each other.

ICTJ and UNICEF organized another, larger retreat to provide a forum for the youth to present their findings and decide collectively what to do with the stories and perspectives they had already gathered.

In the brainstorming sessions, the young people came up with the idea of creating a radio report that would feature stories, testimonies, music, and debate about the conflict and its aftermath from the perspective of Ivorian children and youth.

The appeal of radio was that it had the potential to be an interactive learning tool for telling a living history, adapting over time, and incorporating new stories or perspectives. It also allowed the youth to creatively use different forms of media to communicate these stories in ways that felt most natural to them.

A year later, the youth leaders completed a four-part radio program based on the testimonies and dialogues they had documented across the country.

The program chronicled a very different history than the one told in official circles, setting aside the notion that youth violence was a form of mass hysteria, instead suggesting that the Ivorian conflict was the boiling point in a longstanding inter-generational conflict.

The testimonies shifted the focus from the violent acts themselves to the social and political apparatus at work behind child and youth militias. The report looked at the root causes of youth mobilization during the recent crises and included a discussion of politicization in schools and through media and music.

They also addressed the difficult choices that individual young people had to make, recognizing that while in many cases youth were perpetrators, they were also victims of a larger system.

Through this audio report, the youth began to put forward their ideas as to what could be done to redress past violations and their consequences and to prevent their recurrence.

According to its producers, the radio report was not about the past being only something to look back on — it was about the past as it related to youth today and their hopes for an improved future:

Actors we have been. Perpetrators, too, in the recent history of Cote d’Ivoire. But what type of actors will we be? What role do we want to play in the future of our beautiful nation, our beautiful country? What do we need to do to avoid the return of massive human rights violations and the unnecessary suffering of the population?

These were the questions the youth took to affected communities outside Abidjan as they held discussions at the local level. Their discussions explored alternatives to violence that emphasized “politique positive,” a term coined by the youth leaders to encourage their peers to become active, engaged citizens through nonviolent means and to refuse the call to violent mobilization. They also proposed strategies or reforms that could help prevent the return of violence.

In fact, the young people had created a powerful and broad-reaching educational tool that added their voices to a national debate about the role of youth in the recent conflict and its enduring impact today.

Wanting to maintain this momentum, the youth decided to form their own official independent association, the Réseau Action Justice et Paix (RAJP).

In January 2016, a team of RAJP and ICTJ carried out consultations with children and youth victims in San Pedro, Korhogo, Duekoue, Bouake, and Abengourou, focusing on their experiences of the conflict and their recommendations for reparations and guarantees of non-recurrence.

In all, 125 children and youth were consulted, at least 50% of whom were direct victims; the rest were leaders of local child and youth associations.

Several of their recommendations were integrated into the final reparations policy prepared by the National Commission for Victims’ Reconciliation and Compensation (Commission National pour la Réconciliation et l’Indemnisation des Victimes, CONARIV), including the need for medical and psychological attention for youth, measures to facilitate access to education, and calls for financial compensation.

The youth network also presented its report to the Ministries of Education and Solidarity and continues to work with these institutions on the implementation of reparations for conflict-affected youth.

For the youth who participated, these experiences seemed to be transformative: More than just being part of a truth-telling process, they were driving it, which proved very empowering.

In many ways, the catalytic effect of this project matters more than any final product: the dialogue process resulted in the creation of a powerful tool, produced by youth for youth. It also created momentum for what will be a long-term process of awareness-raising, advocacy, and ultimately reform.

Rather than trying to influence the education sector from the top down, it proved more effective in Cote d’Ivoire to build momentum from the bottom up in the hopes that eventually some of the discussions would find their way into schools as complementary teaching and learning materials — or as materials for extracurricular opportunities.

One of the main lessons from this work is the importance of continually assessing the windows of opportunity in a changing context, and responding with creativity and flexibility to new challenges and developments. Recent events highlight with sobering impact the high stakes and risks to post-conflict peace-building if youth are not engaged, as disaffected youth are often the first spoilers. Yet, what gets less attention is the fact that if you do engage youth meaningfully, the potential returns are extremely high. In Côte d’Ivoire, ICTJ and UNICEF’s work with youth had a catalytic effect, turning disparate youth activists into an organization working towards peace and justice in Côte d’Ivoire. It is that momentum and civic engagement that a country needs as it emerges from conflict or a period of repression, to serve as a check on power and to continually push their country to a better place where basic human rights are respected and its citizens can live in dignity.