Children born of wartime sexual violence often face rejection from the communities their mothers call home. For these families, the failure of the state to address the harm they suffered and the enduring stigma leads to their further marginalization. An ICTJ film on this stigma, and the paths to overcome it, sparked discussion at a panel held at the Austrian Mission to the United Nations. 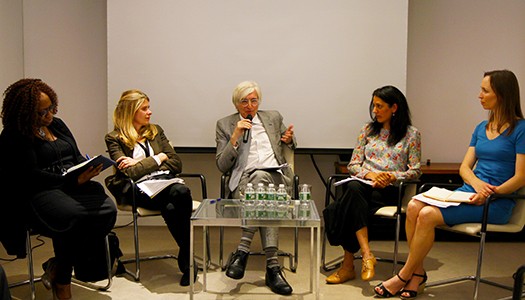 Children born of wartime sexual violence often face rejection from the communities their mothers call home, which were themselves impacted by conflict. For these families, the failure of the state to address the harm they suffered and enduring stigma leads to their further marginalization. That stigma, and the paths to overcome it, were the focus of a panel discussion on June 9th, hosted by ICTJ and the Permanent Missions of Austria and Uganda to the United Nations. The discussion followed a screening of I Am Not Who They Think I Am, a film depicting the struggle for redress for women and their children born of war in northern Uganda.

I Am Not Who They Think I Am, produced by ICTJ and MediaStorm, first premiered in February. It illustrates the challenges facing women who were abducted by the Lord’s Resistance Army (LRA) in northern Uganda and forced to become soldiers, wives, and mothers in the rebel group. Upon their return home, neither the women nor their children were welcomed back into the community. Following the screening of the documentary, ICTJ aired a follow-up film that traces the impact I Am Not Who They Think I Am has had on the ground in Kampala, Uganda’s capital, and Gulu, the women’s home.

The panel discussion that followed the film screenings featured Virginie Ladisch, Director of the Children and Youth Program at ICTJ; Sharon Riggle, Chief of Staff at UN Secretary General's Special Representative for Children and Armed Conflict; Nancee Bright, Chief of Staff of the Office of the Secretary-General's Special Representative on Sexual Violence in Conflict; and Ratna Jhaveri, Child Protection Specialist at UNICEF. Moderated by ICTJ President David Tolbert, panelists discussed the challenges of marginalization that the film conveyed, and what lessons can be drawn from its message moving forward.

A Case for Redress and Survivor Agency

Ladisch began the panel by examining three key problems facing Uganda’s women and youth victims as portrayed through the film: that rejection is often passed down through generations and its consequences amplify with time; that violations must be acknowledged and discussed within their home communities to avoid unjust blaming; and that a long-term approach by the state is required for complete redress. She encouraged international interventions to break free of funding cycles with prescribed outcomes and instead invite victims to directly participate in shaping how international assistance engages with these communities. She suggested such processes need to involve the women and children directly, as well as community members, teachers, and local police. “We need a clear process without a predetermined outcome,” she cautioned.

Bright discussed measures that states can take to address consequences of sexual violence and to “de-stigmatize the victim,” including dialogue between countries; psychosocial support for survivors; accountability for perpetrators; and livelihood support for the affected communities, involving institutions like the IMF and World Bank.

Bright lauded the participation of victims in the film screenings and the interviews with religious leaders and community members in Kampala and Gulu, noting the role that such incorporation can have in forging strong community-level cooperation. “I love that you included the archbishop, that’s what’s going to change the narrative,” Bright continued in reaction to the event’s footage of the I Am Not Who They Think I Am screening in Uganda. She further emphasized the impact that media can have on victims, and promoted wider distribution of the films.

Riggle addressed the widespread issue of forced marriage and women being used for sex by various combatants. She touched on the role that journalists and artists have in spreading awareness about such violations, noting that sexual violence still goes on largely underreported. She explained that this limits international access to knowledge about it and encourages continued discrimination of victims. “Because it’s so stigmatized, girls don’t talk about it,” she said. She also called for stronger engagement with non-state armed groups.

Jhaveri addressed the critical importance of victims’ dignity, which must be emphasized by policy makers and aid workers alike. She referred to UNICEF’s work in Nigeria, in which one victim memorably told her that: “We don’t have hope. We are the leftovers.” The exchange lingered with Jhaveri, and she says it underlines the need to provide redress for victims . Efforts to do so must be cognizant of the contexts to which the victims return, she said, such as gender, socioeconomic status, and the scope of the violation can determine the outcome of interventions. “It’s not simply about the substance of the programs, but the access to them,” she said. “We need to do everything we can to help these people keep from feeling like leftovers.”

Looking Ahead: From Isolation to Inclusion

A brief Q&A session followed the panel discussion and focused on how to move forward and what actions can be taken now to support the victims.

Karen Mosoti of the International Criminal Court (ICC) pointed out some of the key efforts underway by the ICC Trust Fund for Victims for women and children in Uganda, including psychological support, reintegration processes and education access, and more aimed to empower women victims upon their return home.

Cathleen de Kerchove, co-founder of The Children of Panzi said that her organization addresses the problem at the educational level. “We advise teachers not to reprimand, but to understand,” she said. Kerchove emphasized a need to go into Ugandan schools directly in order to de-stigmatize the marginalized youth and keep them included.

Ambassador Kinty Nyago of Uganda also addressed the complex situation on the ground, before Ambassador Jan Kickert of Austria closed the discussion with a reference to the “no-one left behind” theme of the 2030 Agenda for Sustainable Development. “We need to work on this together,” Kickert said. “It’s a responsibility of all of us to help these women and children not to be left behind also.”

The panel is part of the continuing advocacy for the rights of children born of war and their mothers, which uses I Am Not Who They Think I Am as a advocacy tool both nationally and internationally. Previously, ICTJ organized two screenings in Uganda, as well as one in New York City. In Uganda, over 150 people in total attended the events, including policy makers, international funders, local community, youth and media. The events opened up the conversation on the need for redress for children born of war in a way that had not happened before.

The film was also screened during the visit of EU ambassadors in Uganda to Gulu. This screening resulted in the engagement of the international policymakers with the local authorities in order to make the issue of children born of war a priority in their agenda. They discussed redress needs with the two organizations featured in the film, Watye Ki Gen and Women’s Advocacy Network, which led to further support and the pledge that the EU country strategy for Human Rights and Democracy (2016- 2020 will pay special attention to children born of wartime rape. The two protagonists of the film, Janet and Stella, received a peace and reconciliation award by the French and German embassies in Uganda.

The documentary also raised awareness among high-level politicians in Uganda. At a recent meeting of Members of Parliament, the speaker of parliament expressed concern over the plight of children born of war and expressed Parliament's commitment to take measures that address these challenges. She further directed the Minister of Internal Affairs to update parliament on steps they are taking to deliver justice to survivors of sexual violence and support children born of war.