A new ICTJ report finds that the time is ripe for Georgia to take meaningful steps to reckon with the dark chapters of its recent past and ensure that abuses never happen again. The report warns that while political conditions in the country may not be perfect, waiting longer to acknowledge victims and deal with the past may lead to more abuses and a possible conflict in the long run. 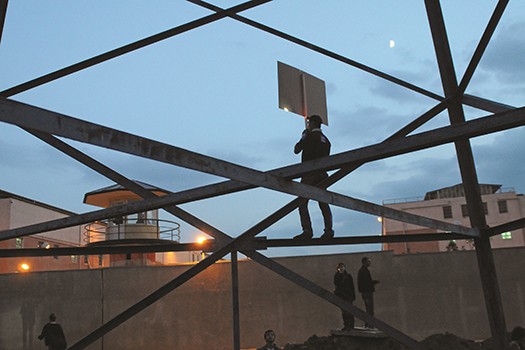 The alarming situation inside Georgian prisons came to light in 2012, when graphic footage of guards abusing detainees with broomsticks was televised, shocking the nation and prompting days of protests. These violations were part of a larger system of abuse perpetrated by the state against citizens from 2004 to 2012. Since then, the momentum that saw several senior officials removed from office, including President Mikhail Saakashvili, has stalled, without victims seeing justice or needed reforms being made.

A new report from the International Center for Transitional Justice finds that the time is ripe for Georgia to take meaningful steps to reckon with this dark chapter of its recent past and ensure that abuses never happen again. The report warns that while political conditions in the country may not be perfect, waiting longer to acknowledge victims and deal with the past may lead to more abuses and a possible conflict in the long run.

Based on interviews with activists, former prisoners, and officials, the report, titled Assessing the Prospects for Transitional Justice in Georgia, focuses on opportunities for pursuing justice for violations and “miscarriages of justice,” particularly those committed under the Saakashvili administration’s “Zero-Tolerance Policy” on corruption and organized crime.

According to the report, while the Zero Tolerance Policy significantly reduced crime in Georgia, a weak system of checks and balances meant that there was little to prevent the return of authoritarian tendencies.

“The Saakashvili administration prioritized a strong state over human rights, which resulted in abuses of power, high rates of arrests and violations of citizens’ rights.” said Howard Varney, author of the report and Senior Program Adviser at ICTJ.

From 2008 to 2012, at the height of the “Zero-Tolerance Policy,” Georgian courts approved pre-trial detention in more than 90 percent of cases. The odds were exceptionally high that suspects would end up in jail— where torture and abuse were known to be widespread.

Many accused, to avoid serving jail time, made plea bargains with courts and prison authorities, which led to abnormally high conviction rates. The practice of providing large “donations” to avoid jail sentences also became commonplace. It is estimated that under the policy, some officials seized land and property from accused persons valued up to $100 million.

When the Georgian Dream coalition won the general election in 2012, there was a feeling of hope that victims’ demands for justice had been heard and badly needed reforms would be made.

But the few measures taken by the government so far have been mostly ineffective. Prosecutions against former officials have been denounced as politically motivated. A commission that was proposed to review and overturn wrongful convictions was criticized and abandoned.

“Despite the public outcry, victims are still waiting for justice, reforms, and return of their property,” said Anna-Myriam Roccatello, Deputy Program Director at ICTJ and a presenter at today’s report launch in Tbilisi. “Our findings show that, at this point, serious reforms are still necessary.”

Among the numerous recommendations, the report makes is the holding of a “national dialogue” that would help generate ideas and possibilities for redressing the past and building a stronger future.

The report also recommends gathering data on past human rights violations, so that any future commission or transitional justice program will not have to start from scratch in identifying victims and alleged perpetrators, and assessing the nature and extent of the harm suffered by victims. Next, it suggests that Georgians consider establishing a truth and nation-building commission to investigate the underlying causes of conflict and abuse in Georgia – and to recommend measures to prevent them in the future. The report also proposed an independent review commission to make recommendations for retrial or pardons in respect of the alleged miscarriages of justice.

Several respondents who spoke with ICTJ wished to see past violations investigated and prosecuted by an independent and credible body. ICTJ supported the idea of a specialized investigative capacity for Georgia and its report made detailed recommendations on how to guarantee the independence of such a mechanism and prevent political interference.

Although some respondents expressed concern that it might be too late to pursue cases, Varney noted that “there is invariably a deficiency of evidence before the commencement of serious investigations.” The report notes that an appropriate prosecutorial strategy could ensure that most perpetrators face justice even if not every case is prosecuted. Varney added that other forms of accountability should be pursued through truth seeking and reparations.

The report concludes that the full potential of the Georgian people is being held back by the failure to conduct a full assessment of the past and to take steps to redress the abuses. It warns that the dangers of repeating the past are ever present.

A launch event for the report, co-hosted by the Open Society Georgia Foundation, was held this morning in Tbilisi.

The full report is available for free download in English and Georgian.

PHOTO: Students demonstrating in front of Gldani Prison, after footage was released of torture being committed against inmates. (Levan Kherkheulidze/Liberali)