Guatemala's Claudia Paz: "For crimes of past and present, justice must be done"

In Guatemala, it has taken years of relentless organizing by civil society and cooperation with international partners to begin to prosecute the most responsible, but progress has been made. Claudia Paz y Paz Bailey, currently the prosecutor general and head of the Public Prosecutor’s Office, has played an instrumental role in the struggle for accountability. In this recent interview, ICTJ spoke with Ms. Paz about confronting the legacy of the past at the national level within an international system of global criminal justice. 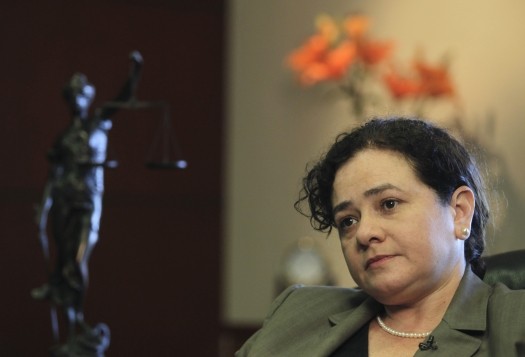 It can take a country many years to seek accountability for a legacy of serious crimes or genocide, and Guatemala is no exception: after 36 years of internal armed struggle ended in 1996, society was left with thousands of unsolved cases of death, disappearance, and sexual violence, including over 600 massacres. In its report, the Historical Clarification Commission determined that military operations against Maya communities constituted genocide.

It has taken years of relentless organizing by civil society and cooperation with international partners to begin to prosecute the most responsible, but progress has been made. One of the reasons for this has been the instrumental role of Claudia Paz y Paz Bailey, prosecutor general and head of the Public Prosecutor’s Office. Since we last spoke with her, she has continued to work tirelessly for justice for the victims of Guatemala's civil war.

While Ms. Paz was in New York to attend the third Greentree Conference on Complementarity, ICTJ spoke with her about confronting the legacy of the past at the national level within an international system of global criminal justice.

#### The brutal legacy of the Guatemalan civil war, in which thousands of civilians were murdered in systematic campaigns of violence, is still present in the country, where many people responsible for crimes have never been brought to justice. Is there consensus in Guatemala on how to face this painful legacy?

There are enormous efforts by the victims and victims’ organizations, which have been battling all these years for truth and justice. There’s an effort by relatives of the disappeared to find their loved ones and bury them. And by relatives of victims of extrajudicial execution, or survivors of sexual violence, to get justice for those cases.

And finally, thanks to verdicts at the national level, in the last three or four years there has been major advances, like the Constitutional Court ruling that says that the crime of forced disappearance constitutes a permanent crime, or the Inter-American Court ruling on the Dos Erres case, calling on judges and the justice system in general to eliminate obstacles to the trials moving forward. Or verdicts like the one from the Spanish courts, which issued arrest warrants for top military leaders as a matter of universal justice.

So I don’t believe that there’s ever a consensus in any country to “put them on trial now,” but rather efforts supported both by national and international figures and institutions that allow these cases to go forward.

What is the strategy of the Public Ministry, which you lead, regarding these crimes of the past? And what were your goals when you took office? Do you think you’ve managed to accomplish them?

There is also a strategy we call strategic criminal prosecution because it attempts to go beyond case-by-case prosecution and go after criminal structures or illegal markets instead. This also applies to things that happened during the armed conflict.

It’s extremely difficult for the Guatemalan justice system to attempt to deal with and investigate the thousands of human rights violations that occurred, but nevertheless there are cases that include a large number of people, like the one against Efraín Ríos Montt and other top military leaders, where we’re talking about thousands of displaced people, hundreds of extrajudicial executions.

The first top military leaders who committed crimes during the war were indicted in 2011, shortly after you were appointed Attorney General in 2010. Fifteen years have passed since the end of the war in Guatemala. Why has it taken so long to prosecute those crimes?

I’d say it was the sum of a number of factors. A very important advance in Guatemala was the report of the Truth Commission, which was supported by the United Nations and headed by two distinguished citizens and a UN representative, Professor Christian Tomuschat, who led a team that eventually produced a report that was very important for Guatemala. To this report we can add for example the more than six thousand exhumations that have taken place all over the country.

We’ve been able to prove the cases with very solid evidence, not just survivors’ testimonies, but also DNA, forensic evidence, documentary proof, even videos of the time documenting what happened, which in various case have convinced judges that these events happened and that these people were responsible.

Since you became head of the Public Ministry you have focused on creating a strong team, capable of taking on the most complicated cases in quite difficult circumstances. There are a lot of challenges facing your team and the members of the Guatemalan judiciary, among them a very polarized political climate and threats to your safety. What are the greatest challenges you face and what should be done to improve the safety of prosecutors and judges?

Given the level of risk that exists in Guatemala for all citizens, there’s no doubt that prosecutors run a risk, especially in regard to certain cases.

There are some strategies that have worked better than others. The existence of High Risk Tribunals has been an appropriate strategy. You can’t ask a judge or a prosecutor who’s living with organized crime to be as outspoken and effective as a prosecutor or a judge in Guatemala City, where there are more guarantees, where their work is protected. This strategy has been used, so that very high risk cases are removed from the local area and taken to Guatemala City, but it remains a challenge to guarantee the prosecutors’ safety.

In May of last year, a colleague of ours, prosecutor Allan Stowlinsky, was murdered. We didn’t rest until we got to the bottom of it, and we brought those responsible- members of the organization Los Zetas- to justice. The same thing has happened with the murder of colleagues and police investigators who were killed this year. Those responsible are standing trial right now to send a clear message: when violent crimes are committed against civil servants in the justice system, the state will react.

Retired General Efraín Ríos Montt, who was de facto president during the worst massacres against Maya communities, was indicted in January for genocide and crimes against humanity. When daily crime rates in Guatemala sky-rocket, why is this case from the past so important?

It’s very important because it’s the only way to guarantee that these things don’t happen again. You can’t separate what happened during the war and what’s happening now. There are some very strong elements that persist. We’ve been trying members of the security forces for involvement in ordinary violence, we’ve tried prosecutors, we’ve even tried judges, and there is also a major effort to purge institutions.

For these cases, trials are a way for citizens to regain confidence in the justice system. We have to send a very clear, strong message from the institutions of state that no matter who the perpetrator or the victims may be, these crimes must be tried.

So for the rule of law in the country it’s vital that grave human rights violations be discussed in an impartial setting of the courtroom, and that judges are the ones to decide the guilt or innocence of the accused.

Guatemala recently ratified the Rome Statute, which establishes the basis for an international justice system through the creation of the International Criminal Court. What does this mean for Guatemala? Does it help the work of you and your team?

I think the message the President and the Congress of the Republic sent when they ratified the Rome Statute is a very important one.

It’s a message of support, of ratifying our country’s support for the principles established in the international community that there are certain behaviors that will never be permitted, there are certain crimes that must be prosecuted, and I believe that for us as prosecutors it’s very encouraging that Guatemala has ratified the Rome Statute because it’s not just an issue for judges or prosecutors: it’s an issue we commit to as a state with regard to the citizens and with regard to the international community as a whole.

In international circles, your work is widely recognized and highly respected. What would be your message to international organizations that are capable of helping Guatemala? How can the international community help to bring justice for serious crimes of the past?

There are some issues in the world that are bigger than individual countries alone: grave human rights violations- and impunity for them- is one example. Fortunately, after WWII, it has become clear that prosecuting those behaviors is in the interests not only of the state and its citizens, but the international community as a whole.

After the end of the civil war in Guatemala, some transitional justice measures were implemented, including a Truth Commission and some reparations to the victims. Now, many years later, we’re seeing the first trials taking place. How do these measures complement one another in Guatemala? What do you think is necessary for the country to truly face the legacy of its civil war?

In other words, they can’t be separated: justice here serves truth. And thousands of witness statements that were given in the reparations process were presented to the Prosecutor’s office as cases to be investigated.

So there’s an interdependence between the three measures. Depending on how the cases progress and how the structures that functioned during the war are revealed, we can also do a better and more thorough job of purging so as to guarantee non-repetition.