Young people in Kenya now have a new tool to help them learn about difficult periods in Kenyan history and discuss justice, democracy, leadership, and their role as Kenyan citizens. 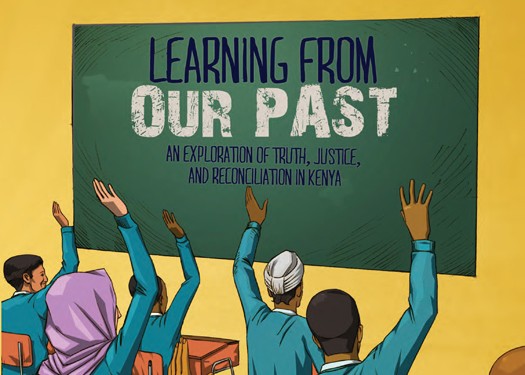 NEW YORK, November 20, 2015—Young people in Kenya now have a new tool to help them learn about difficult periods in Kenyan history and discuss justice, democracy, leadership, and their role as Kenyan citizens. It is an interactive, illustrated educational booklet, titled “Learning from Our Past: An Exploration of Truth, Justice and Reconciliation in Kenya,” created by the International Center for Transitional Justice and Facing History and Ourselves, in collaboration with Kenya’s National Cohesion and Integration Commission.

The booklet’s history lessons are drawn directly from the work of Kenya’s Truth, Justice and Reconciliation Commission (TJRC), which was created in 2008 to investigate and report on gross violations of human rights, economic crimes, illegal acquisition of public land, ethnic violence, and other abuses committed in Kenya from 1963 to 2008.

“Educators and mentors are encouraged to use this booklet in and outside the classroom as a way to engage young people in discussing the past, hear their stories, and reflect on the role young people can play in making Kenya more just and peaceful,” said Virginie Ladisch, head of ICTJ’s Children and Youth program. “One of the goals is to help to inspire critical thinking among young people, which is crucial if we want them to be well-informed and active citizens.”

Kenya’s modern history has been marked by periodic conflicts and political violence, including the Shifta War, an attempted coup in 1982, and the 2007-2008 post-election violence, which claimed more than 1,300 lives and displaced over 600,000 people.

Kenyan Parliament created the TJRC after the 2007-2008 election crisis to help uncover the truth about past injustices and give recommendations on ways to prevent political violence from recurring and to strengthen human rights protections for Kenyans.

Approximately 40,000 people, including 2,000 young people, shared their experience of human rights violations and injustices with the TJRC. Some spoke about having to flee their homes to escape violence, losing loved ones, or suffering poverty. Others spoke about physical and sexual abuse and the effects of conflict on their lives.

“The TJRC sought to help explain, through its investigations, why the rights of people in Kenya haven’t always been protected. As part of that process, it wanted to know what life is like for Kenyan young people and why so many children continue to live in poverty and feel unsafe,” said Christopher Gitari Ndungú, ICTJ’s head of office in Kenya. “It also made recommendations to the government on how to acknowledge the past, institute needed reforms, and hold perpetrators accountable.”

“Learning from Our Past” uses real-life stories collected by the TJRC to teach Kenyan history and help students understand and empathize with other Kenyans through first-hand accounts.

Unlike with most history textbooks, readers are encouraged to explore their own roles in shaping society and consider how they can be agents of social change, both positive and negative. They are encouraged to see themselves as empowered citizens, capable of shaping and strengthening Kenya’s democracy.

“Democracy is a process,” said Murphy. “It is shaped by the choices and actions of individuals, communities, and civil society organizations. It is vital that young people see and understand that they have a role to play in strengthening and nurturing their democracies.”

Some of the material may be challenging for young people, because many of the testimonials describe violence and abuses from the perspective of the victim or the perpetrator. To help students, there are spaces in the booklet for journaling and expressive drawing as well as tools and guides for teachers.

Added Ladisch: “The booklet is aimed at helping young people in Kenya to better understand the different challenges facing their country as they learn about the past.”

The full booklet can be downloaded here.