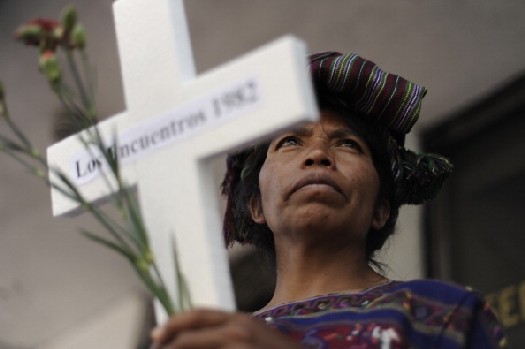 The latest episode of ICTJ Forum features ICTJ's Marcie Mersky, who joins host and Communications Director Refik Hodzic for an in-depth analysis of news in Guatemala and Nepal, and looks ahead to the next year of transitional justice developments around the world.

The Forum begins with a discussion of breaking developments in Guatemala, where there has been a push to have the Constitutional Court consider and grant amnesty for General Efraín Ríos Montt, who has been charged with genocide in relation to crimes committed during Guatemala’s civil war.

“This is a very significant situation,” said Mersky, “This genocide case in particular is the only time when there has been a genuine effort in a national jurisdiction to prosecute the crime of genocide committed in its own territory.”

Mersky provides a detailed look at the evolution of justice efforts attempting to address crimes committed during the genocide in Guatemala, as well as the tactics used to skirt accountability for those responsible.

She says Guatemala wouldn’t be the first country where there would be pressures brought to bear on judiciaries in complex cases involving high-ranking political figures, and that the international community would be watching these developments closely.

The Forum addresses recent news from Nepal, where- sparked by the UK arrest of Kumar Lama, a former high-ranking officer in Nepal’s army- the stalled transitional justice process in Nepal has taken center stage.

Mersky notes that the transitional justice agenda has moved slowly in part because of the general political crisis in Nepal, where a constitutional assembly had been dissolved by the court and there is no functioning parliament.

While it is a good thing that the debate has been reinvigorated, she warns that transitional justice mechanisms should not be seen as a way out of other state obligations towards justice.

“A truth commission isn’t done so that you don’t have to do trials,” she said.

The discussion closes with a look ahead to 2013, in which Mersky identifies regions to watch, and expresses hope that the debates around transitional justice will incorporate lessons that continue to be learned.

Our hope for this new feature is that it complements the World Report and increases the understanding of how transitional justice is linked to news around the world. We invite you to send your feedback to us at communications@ictj.org, and sign up for ICTJ's newsletter here.

PHOTO: An indigenous woman holds a cross during a demo for the advance of investigations in cases of genocide at court on September 26, 2012 in Guatemala City. (JOHAN ORDONEZ/AFP/GettyImages)