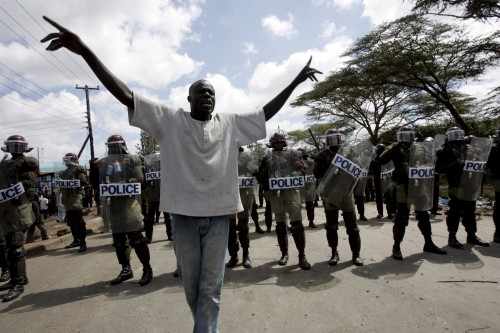 The latest episode of ICTJ Forum, a monthly podcast looking into recent news and events from around the world, features ICTJ President David Tolbert, Truth and Memory Program Director Eduardo Gonzalez, and Africa Program Director Suliman Baldo. They join host and Communications Director Refik Hodzic for an in-depth analysis of recent developments in Kenya, the former Yugoslavia, and Colombia.

Listen to the ICTJ Forum

The conversation opens with a look at Kenya, where ethnic tensions are running high after recent spikes of political violence have left more than one hundred people dead. Midst a season of political battles in the run up to elections, Kenya’s Truth, Justice and Reconciliation Commission has sought another extension for the release of its final report. Eduardo Gonzalez notes that the delays are costing the commission its legitimacy in the eyes of the Kenyan public. “The history of this truth commission is a history of missed opportunities and disappointments,” he said. Suliman Baldo confirms that there is real suspicion that the delay is driven by political motivations.

Baldo and Gonzalez also discuss how the recent ruling of the UK High Court in the Mau Mau case could impact the discourse in Kenya, and provide impetus for other countries dealing with the legacy of colonialism.

The Balkans is another region where transitional justice has to wrestle with the ongoing politics of ethnic divisions. Last week, Serbia’s president Tomislav Nikolic again publicly denied the genocide in Srebrenica. David Tolbert thinks it should not be taken lightly, especially since the statement comes at a time when Serbia is seeking membership in the European Union. He expresses concern that this statement is indicative of denial across the region. “Having just received a Nobel Peace Prize, the EU should take a step back and look into this in a serious manner,” says Tolbert.

Gonzalez and Tolbert explore in detail the pervasive denial of victims’ rights to truth and remembrance in Bosnia and Herzegovina, and how politicization of the past affects civil society initiatives that aim to achieve some reckoning with recent violent.

At the end of October, ICTJ will host the fourth in a series of meetings to move forward the implementation of the complementarity principle. The Greentree meeting will bring together high level government, rule of law and development actors to consider the needs and challenges of national prosecutions in four countries who are members of the International Criminal Court: Colombia, Guatemala, Ivory Coast, and the Democratic Republic of the Congo. “The meeting aims to increase understanding and galvanize support for the complementarity principle,” says Tolbert.

In Colombia, just five days before peace talks between the government and the FARC will begin in Oslo, President Santos issued a public apology to indigenous groups over the abuses they suffered in the boom of rubber production in the Amazon. Gonzalez stresses that the apology is very significant, since rubber production created empires in the Amazon that were “built on the backs of slave laborers.” Apologies, however, need to be complemented by practical policies that protect the rights of indigenous communities, who have continued to be victimized in the Colombian conflict.

Receive the ICTJ Forum in your inbox each month by signing up for the ICTJ newsletter.