For the past few months, ICTJ, along with our partners at the Center on International Cooperation at New York University, has been working on a comprehensive new policy paper on the situation of the many thousands of Syrians detained somewhere in the country’s vast network of prisons. The depravity that goes on inside these detention sites is already so appalling that it would have been hard to imagine when we started the project that the situation for the prisoners could get any worse. And then the COVID-19 pandemic hit, upending all of our preconceptions, and our lives, in ways none of us ever expected. 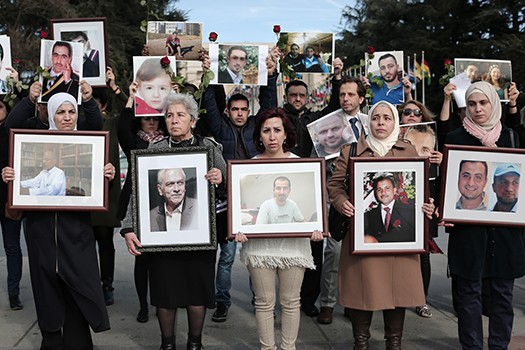 For the past few months, ICTJ, along with our partners at the Center on International Cooperation at New York University, has been working on a comprehensive new policy paper on the situation of the many thousands of Syrians detained somewhere in the country’s vast network of prisons. The depravity that goes on inside these detention sites is already so appalling that it would have been hard to imagine when we started the project that the situation for the prisoners could get any worse. And then the COVID-19 pandemic hit, upending all of our preconceptions, and our lives, in ways none of us ever expected.

In the best of times, Syrian detainees—many of whom are considered forcibly disappeared because their families on the outside have not the faintest idea where they are, or if they are even still alive—face horrifying conditions. Former detainees have reported being crammed so tightly together that they can’t sit down normally all at once and so have to take turns sleeping in squatted positions. Disease is rampant. Health conditions resulting from abysmal sanitary conditions are made worse by frequent physical and emotional torture. Dead bodies pile up daily, and, all too often, nobody knows what becomes of them.

Unfortunately, these are not the best of times; they may be among the very worst of them. Currently, many of us are feeling like prisoners in some way: prisoners of an unseen but deadly virus, prisoners in our own homes, prisoners to economic circumstances whereby to stop working is to stop eating but to keep working could mean putting our lives and those of others at risk. But what of those who are prisoners in the true sense of the word? Of those for whom frequent handwashing and social distancing are not options? Of those for whom a single case of COVID-19 in their facility could mean thousands of fellow innates contracting it almost immediately?

ICTJ is not the first to raise these concerns. The UN High Commissioner for Human Rights, Michelle Bachelet, urged governments to reduce prison populations in order “to avoid an explosive spread of the virus in closed and overcrowded settings.” And such efforts are already underway in many places, typically with a focus on the most vulnerable, such as the sick and elderly, low-level or nonviolent offenders, and those nearing the end of their sentences. In New York City, where ICTJ is headquartered, over 1,500 people have been released from city prisons, many with help from NGOs such as the Legal Aid Society. In Morocco, 5,654 prisoners have been selected for release on the basis of their age, health, good behavior, and length of detention in order to mitigate the spread of the coronavirus. Closer to Syria, tens of thousands prisoners have been released in Bahrain, Iran, and Turkey in direct response to the pandemic, although it has to be said that prominent political prisoners have notably been excluded from those released in each of these countries.

These steps are crucial but not nearly enough, even in places not beset by war. But for a country that has been ravaged by it such as Syria, releasing prisoners is more urgent than ever. The thing is, in Syria, to be a prisoner is to be among the world’s most vulnerable people. Prison conditions have made it so that nobody can remain healthy for long. And laws in Syria mean that huge numbers of detainees are nonviolent and have been detained merely because they were seen as being opposed to the Syrian government (or being married or otherwise related to someone who is)—or for protesting, assembling, or providing care to others. In Syria, even the most mundane and ordinary activities can lead to arrest under ambiguous and broadly interpreted laws that criminalize any conduct of an inherently political nature.

In our forthcoming policy paper, “Gone Without a Trace: Syria’s Detained, Abducted, and Forcibly Disappeared,” we show that the release of prisoners in Syria has been a question of life and death for years. But perhaps this new potential cause of death, one that we all fear because it could take our lives too, will shake us into taking unequivocal action to address the issue of Syria’s detained and forcibly disappeared persons.

Perhaps the coronavirus might even provide a political out for the Syrian regime—by far the largest jailer in the country, though not the only one. Detention and enforced disappearance have been favored tools of two generations of the Assad family, and until now it has seemed unlikely that the current regime would be willing to give up this tactic of terror, even as prisons and secret detention centers are filled beyond capacity and the voices of families demanding the truth and access to their loved ones grow louder and more strident. This could be an opportunity for the regime to show a shred of humanity after nearly a decade of waging a cruel and brutal war. It is also a chance to save lives and demonstrate a modicum of the goodwill that will be needed for a sustainable peace. After all, where prisoners are susceptible to contracting COVID-19, so, too, are the officials and workers inside doing the regime’s bidding. Moreover, experience shows that infection is not the only danger associated with the pandemic—as the disease spreads and conditions worsen in detention centers, the risk of prison unrest will increase, putting both prisoners and guards in harm’s way.

A recent amnesty law is a possible sign that the Syrian government recognizes it could be facing a public health crisis, even if publicly available information at the time of this writing indicates that the country has recorded only an improbable 39 coronavirus cases. But, as our paper notes, past amnesties have essentially amounted to nothing in practice or have fallen far short of their promises, sometimes simply creating new ways to put Syrians in danger. So far, it is reported that only a few hundred detainees have been released out of an estimated population of 128,000. The Syrian Network for Human Rights put it starkly: At the current rate the government is applying the 17 existing amnesty laws, it would take 325 years to release the country’s detained persons, an estimated 80 percent of whom were forcibly disappeared.

When fast action was needed, the international community acted too slowly, for too long. Now, we are on the brink of another humanitarian catastrophe in a prison system where inhumanity has always reigned supreme. It is therefore more important than ever to muster some kind of action. Releases of as many groups as possible should come swiftly, starting with vulnerable populations and those convicted under laws that criminalize free speech, free association, and free assembly. Prison conditions for those who remain must be drastically improved, and current and former detainees should be granted access to independent and quality health care. The regime and other militias still holding prisoners should cooperate fully with the International Committee of the Red Cross and other humanitarian agencies so prisoners can receive the kind of care and assistance they desperately need and essential information can be collected to help reconnect families, many of whom have been displaced multiple times since their loved one’s detention.

Let’s not wait to see what devastation COVID-19 can still cause if it reaches one of Syria’s most vulnerable populations. Syrians have been subjected to enough; let’s do what we can now to protect them from the worst effects of this pandemic.