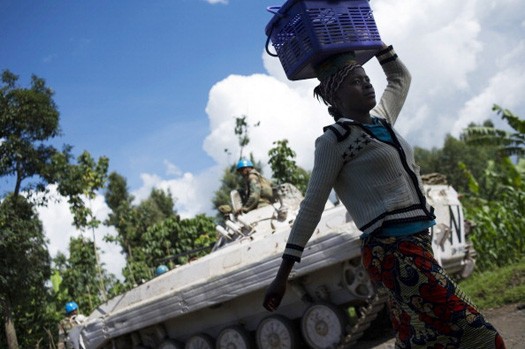 A Congolese woman walks past an armored infantry fighting vehicle just outside the town of Bunagana, on the border with Uganda, on May 22, 2012. PHIL MOORE/AFP/GettyImages

By Sharanjeet Parmar, head of ICTJ's office in the Democratic Republic of Congo.

British Foreign Secretary William Hague and the UN Special Representative on Sexual Violence in Conflict, Zainab Hawa Bangura, are visiting the Democratic Republic of Congo (DRC) this week. Their travel to the conflict-ridden country, known as the rape capital of the world, focuses attention on the urgent need to respond to the alarming levels of sexual violence experienced by Congolese women and girls, particularly in the East, where armed conflict continues.

High-level diplomatic visits are important in underscoring the responses needed for sexual violence survivors. However, without a strong political commitment from top Congolese authorities to address rampant impunity for sexual violence, no amount of attention or media coverage will reduce the violence or put an end to the cycles of suffering.

However, the UK government is not the first actor seeking to respond to the overwhelming rate of sexual violence in the DRC. Multiple initiatives are already underway to support local efforts to achieve justice for gender-based crimes, including projects funded by the European Union and implemented by UN agencies as well as international and Congolese NGOs. Why do international efforts to tackle impunity for sexual violence in the DRC continue to miss the mark?

The root causes of conflict in eastern Congo are multiple and complex. It has been credibly estimated that over five million Congolese have perished due to war-related causes since violence erupted in the mid-1990s. Cycles of killings, rape, looting, and abductions have destroyed communities and disproportionately targeted women and children.

Rampant impunity for the ongoing commission of war crimes contributes directly to instability in the DRC. Members of the Congolese security forces, as well as regional militias and criminal networks, have operated for over a decade without being held to account. While armed groups routinely rape women and girls as part of a strategy to terrorize and control communities, members of the Congolese army freely rape and pillage, instead of protecting the local population.

Solutions to effectively combat impunity for perpetrators of ongoing crimes ultimately depend on the political will of senior actors within the Congolese government.

The PSVI presents an opportunity to facilitate these solutions, provided that the British government firmly exercises its diplomatic muscle behind this initiative. Specifically, clear commitments must be secured from Congolese authorities to actively reform its security and justice sectors and end political interference in the military justice system, as it tries to hold uniformed perpetrators of serious crimes accountable.

Through its G-8 Presidency, the UK government should coordinate diplomatic efforts by all members to secure concrete benchmarks from the Congolese government that will directly fight impunity.

First, a clear message from the G-8 and other international community actors is needed that current peace negotiations should not provide amnesty for crimes committed during last year’s armed rebellion by fighters known as the M23 or the Congolese military. Second, the Congolese Parliament must pass the Rome Statute Implementation Bill, which would empower local courts to try serious crimes by extending judicial competence beyond military courts. Third, international assistance to the Congolese security sector should be conditioned on the establishment of a comprehensive vetting program for perpetrators of serious crimes currently in the Congolese army and police forces.

Finally, the Congolese government should pay outstanding orders for judicial reparations to victims of serious crimes committed by members of the Congolese army.

In terms of the PSVI, the technical support it envisages needs to be situated firmly within the Congolese legal system. The proposed UK Team of Experts should work through Congolese counterparts, such as a DRC Team of Experts, and strategically complement existing international efforts.

Lastly, despite international media attention on the widespread commission of sexual violence in the DRC, funding remains urgently needed for victim assistance services as well as women’s empowerment programs to reduce vulnerability to sexual violence. To make this effective, the PSVI needs to secure deeper in-country support for programs from DFID and other development donors.

Without a major shift in political will from the Congolese government and well-targeted pressures and incentives from international partners, closing the impunity gap for sexual violence and other serious crimes in the DRC remains unlikely. PSVI has an important opportunity to make that happen.