For Social Change to Take Root, Children Must be Involved in Truth-seeking

Children are particularly affected by conflict and mass atrocities and have a unique perspective on how those events impact their communities. This makes their participation in transitional justice processes essential for countries to genuinely make a break with the past and successfully address legacies of mass violence. 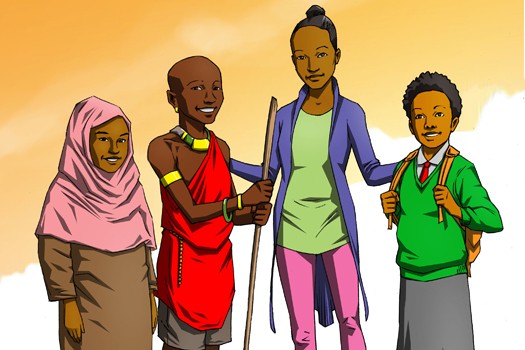 *“I would like children to be given their rights. Parents should be given the respect they deserve. But children also need to be respected, so we can all move forward together in the same direction.” – Mark, a Kenyan child who testified before Kenya’s Truth, Justice, and Reconciliation Commission*

Children are particularly affected by conflict and mass atrocities and have a unique perspective on how those events impact their communities. This makes their participation in transitional justice processes essential for countries to genuinely make a break with the past and successfully address legacies of mass violence.

The International Convention on the Rights of the Child, adopted 26 years ago, guarantees children a right to participate and be heard. In ICTJ’s work throughout the world, we have repeatedly noted that children and young people regularly express their desire to have a say in building a brighter future for themselves and their countries by learning about past atrocities.

With ongoing and planned truth commissions in Tunisia, Nepal, Colombia, and elsewhere, we honor Universal Children’s Day by highlighting the importance of involving children in truth-seeking processes and by providing some practical guidance on how to do that meaningfully.

After seven years of working closely with young people in various countries through our dedicated Children and Youth unit, we have identified some essential steps on how to include them in truth-seeking to ensure their participation contributes to long-term social change. Here are our reflections, accompanied by helpful tools for practitioners and educators:

Children and Youth Must be Heard, For They Are Tomorrow’s Leaders

Not only do children have a right to be heard, in many contexts they are actively demanding it. Ghada from Tunisia, Prativa from Nepal, and Julian from Colombia, representing voices of many others from around the world, have set out a clear case for wanting to know the truth about the past in their societies and for actively taking part in truth-telling processes.

In Kenya, after contested elections in 2007 sparked widespread violence resulting in at least 1,500 deaths, sexual violence and displacement of thousands, a Truth, Justice, and Reconciliation Commission (TJRC) was established to investigate crimes committed during that period and before, dating back to 1963. The TJRC’s mandate included ethnic violence, economic crimes, community marginalization, and other human rights violations. Around 40,000 people testified before the TJRC.

Building on the work of previous truth commissions that paved the way for greater child participation—notably the truth commissions in Sierra Leone and Liberia—the Kenyan TJRC took seriously the need to involve children and put in place processes and protections for them to take part in the truth commission’s statement gathering and testimony giving. Two children-specific hearings were heard, and over 2,000 statements from children were received.

Our short film Voices of Tomorrow tells the story of Mark and Sharon, two Kenyan youths who believed in the importance of unveiling the truth about past crimes in Kenya and participated in the TJRC process. Mark and Sharon went before the commission to share their stories and hopes for Kenya’s future. “I would like to see people live a good life in Kenya. I would like to see peace,” said Mark. “People should not be tribalistic, they should be responsible for their lives.”

In recent years we have witnessed tremendous progress in raising awareness of the rights of children to participate and be heard by opening spaces for them to engage on vital issues affecting them and their communities. Yet, for many, questions still remain about how to move beyond token involvement and turn the right to participation into a meaningful, impactful engagement.

It is only in the past decade that truth commissions have begun to incorporate the direct participation of children. Earlier truth commissions, such as the one in South Africa, considered the idea but ultimately decided it was too risky for children to have a role in statement taking. However, if well planned and managed, the direct participation of children in truth-seeking exercises can not only enrich the narrative collected, but also begin to positively shape children’s identities as engaged citizens.

A significant challenge faced by truth commissions is the inherent tension between children’s right to participation and the right to protection. In an effort to provide guidance on how to balance these two fundamental rights, ICTJ interviewed former Kenya TJRC commissioners, child protection agencies, and international experts, incorporating their experiences into two instructional videos. These videos provide helpful insights into how to effectively engage children in truth-seeking processes.

“Involving Children in Truth Commission Proceedings” gives a comprehensive overview of how to engage children in truth commissions, while “Planning for Children’s Involvement in Outreach, Statement Taking, Hearings, and Reports” provides more detail on the mechanics of that process. With these videos, those involved in current and future truth-seeking processes, such as those in Tunisia, Nepal, and Colombia, can learn from the practical experiences.

“There’s a need to put in place, right from the start, mechanisms to reach out to the different groups that are targeted, [including] children,” says Nancy Kanyago, Director of Special Support, Kenya TJRC, in the video. “[You need] resources, civic education, and to start planning for their participation, because children’s participation requires a lot of background work to ensure that it happens. And so there’s need for commitment and good will as well as deliberate plans to ensure that they do participate.”

The Truth Needs to be Taught in the Classroom

Including children and young people in truth commissions is an important first step, but children’s participation does not end after testimony is given.

The impact of a truth commission, or a national process of reckoning with legacies of human rights violations, depends largely on the public debate and reflections its findings trigger long after the release of the final report. This impact depends on how those conversations contribute to a better understanding of a country’s past, how they catalyze a rejection of violence as means of settling disputes in the society and consequentially lead to changes in attitudes and structures in the present and future.

One of the most important places for these conversations to take place is the classroom. Traditionally left out of discussions about truth-seeking and transitional justice, the education sector has a crucial role to play in giving meaning to transitional justice processes, especially truth commissions. Partners from the education system should be involved in these processes from the outset so that efforts can be targeted and coordinated to seek maximum impact and promote broader conversations involving young people. 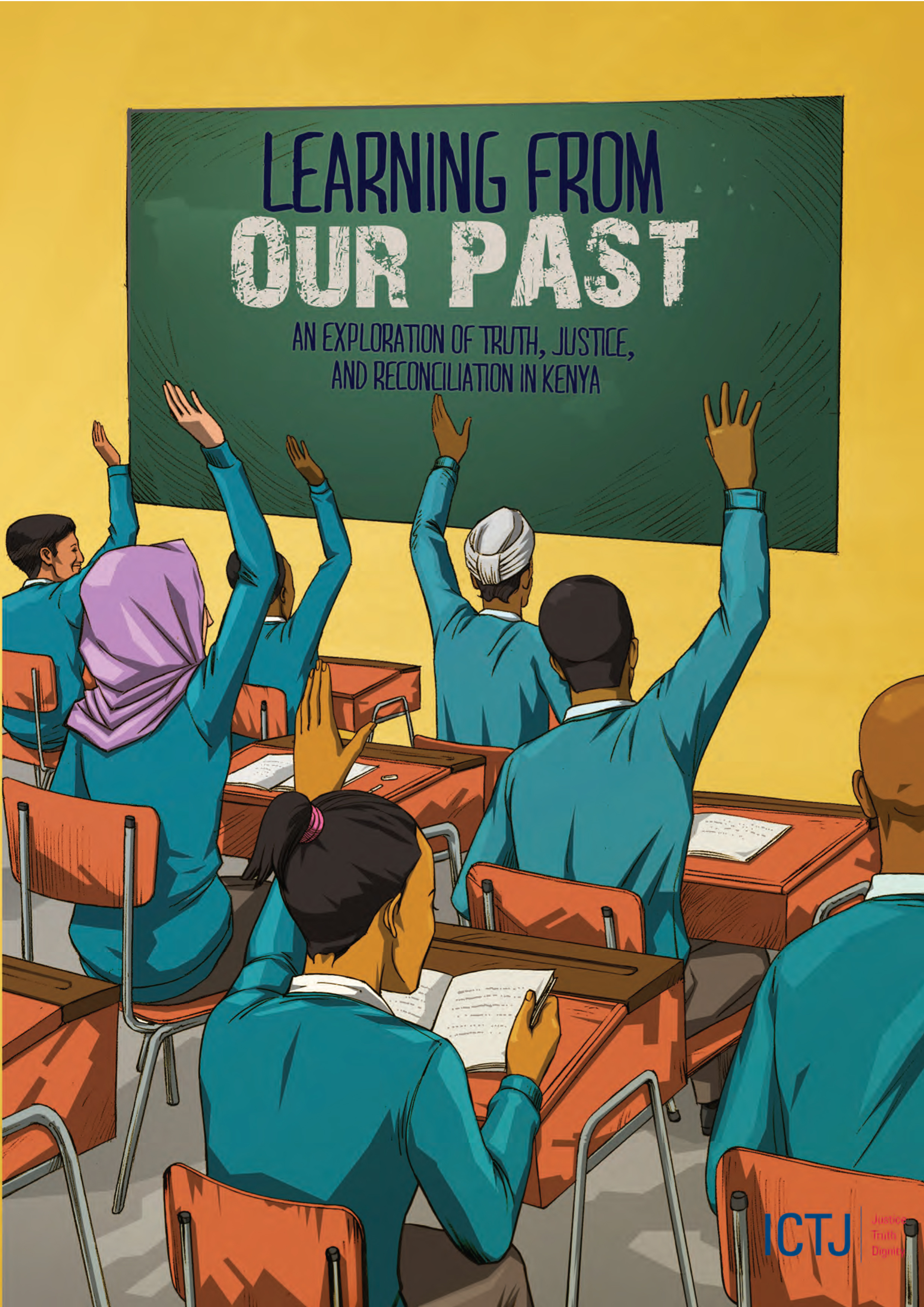 In Kenya, in collaboration with the TJRC, Facing History and Ourselves, and Shikaya, ICTJ developed Learning From Our Past, an illustrated booklet based on the TJRC final report designed to guide discussions about the past among students and spark their conversations about strengthening justice, and building democracy and social cohesion in Kenya. The National Cohesion and Integration Commission helped to disseminate the report throughout the country.

According to a young activist from Nairobi who attended a recent ICTJ workshop on learning from the past, “It is only by understanding these conflicts and what led to them that we can then be able to address the root causes so as to prevent future occurrences.”

The same feelings are present in other countries. In Canada, following the release of the Truth and Reconciliation Commission’s findings, students are calling for the abuses committed against indigenous children at Indian Residential Schools and their legacy – a history detailed in the TRC’s report – to be taught in schools.

As Andrea, a young Canadian from Edmonton explained, “We are the next generation. After 10 years we are going to be the adults, the lawyers the prime ministers. We have to know when we are young, and when we are older we can make sure this doesn’t happen.”

Making the right to participate a reality does not only benefit children, but is also crucial to enhancing the effectiveness of transitional justice processes more broadly. As one youth in Kenya explained: “Knowledge is power. If the youth are aware, there is hope for a better future, a better Kenya, a better Africa, a better world.”

PHOTO: An illustration from Learning From our Past shows Kenyan youth of different backgrounds. (Illustration by Maurice Odede)