By this summer, dozens of paramilitaries and guerrillas in Colombia's Justice and Peace process will have already spent eight years in prison. In accordance with the law, those who fulfill their obligations to contribute to the truth and provide reparation to victims should be released after serving eight years. In this op-ed, ICTJ's Maria Camila Moreno analyzes the valuable lessons learned through this process. 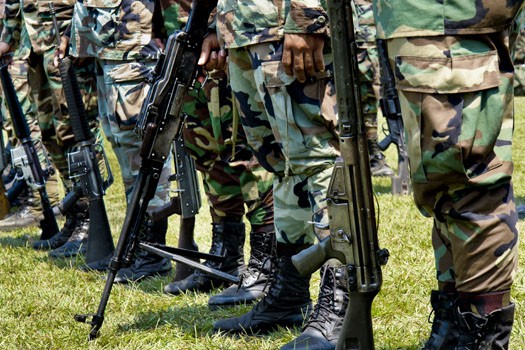 By Maria Camila Moreno, director of ICTJ's program in Colombia

The Justice and Peace Law (JPL) is again at the center of the public debate in Colombia. It is no coincidence that this is happening eight years after the law was approved, because this specific number of years is the key to understanding the renewed interest in the law. In 2005, President Alvaro Uribe signed into law a bill (Law 975 or Justice and Peace Law) for the demobilization and dismantling of the Self-Defense Forces of Colombia (AUC). This paramilitary structure had consolidated its power in the country by perpetrating heinous crimes against the civilian population: massacres, forced disappearance, extrajudicial executions, torture, sexual violence, kidnappings, and mass displacement. According to the report by the National Historic Memory Center “Basta Ya”, paramilitary groups were responsible for 59% of the massacres committed during the internal armed conflict.

The basic premise of the JPL was to balance the effective demobilization of the armed groups–by offering alternative and reduced sentences to demobilized former combatants that entered the process–and the obligation to guarantee victims’ rights. The demobilized combatants who applied to take part in the process were required to meet a series of conditions in order to enter the justice and peace process: confess to their crimes, contribute to the clarification of the truth about these crimes and the paramilitary phenomenon, contribute to the reparation of victims, and submit to a re-socialization process. Those who complied with these requirements would receive reduced prison sentences of between five and eight years.

But we must not get carried away by this unfounded hysteria. The Justice and Peace magistrates will be evaluating each individual case to determine whether or not the inmate requesting suspension of the sentence has complied with the conditions for release.

In terms of balancing these two aspects, the Justice and Peace process has been a valuable learning process for Colombia that should not be underestimated, especially now, when a model for accountability is being designed in the context of the ongoing peace talks between the government of Colombia and the Revolutionary Armed Forces of Colombia (FARC) in Havana.

To begin with, the information provided by the postulados (former paramilitaries suspected of crimes that are to benefit from the JPL) has served to illustrate the extent of the paramilitary violence, and reveal the economic and political dimensions of paramilitarism. It has also exposed, at least partially, the network of relationships that these armed groups had constructed throughout the decades with state agents, members of the armed forces and politicians, among other powerful actors. The paramilitaries have confessed to more than 40,000 crimes affecting 51,000 people, including nearly 1,000 massacres, 25,000 murders, and more than 3,500 forced disappearances involving more than 1,400 state agents.

Also, the justice and peace process has been the grounds not only for placing victims at the center of the public debate, but also contributing to the formulation of public policies for the restitution of rights and the institutional and social recognition of the armed conflict. The laws that followed the approval of Law 975 have served to reinforce broader victims’ rights, such as the right to reparations, truth or land restitution, and have led to the creation of public institutions that are responsible for enforcing these rights, including the Unit for the Reparation of Victims, the Land Restitution Unit or the National Historic Memory Center.

The justice and peace process has obvious flaws, starting with the reduced number of sentences handed down over this eight year period: less than 20 of the 4,000 postulados have been convicted and only 14 sentences have been handed down. Although the judicial operators responsible for implementing the law have understood that it is impossible and inefficient to continue to prosecute cases on a crime-by-crime and perpetrator-by-perpetrator basis, typical of the ordinary criminal justice system, focusing on investigating criminal organizations that have the capacity to commit systematic crimes, this shift in focus has not been adequately reflected in the indictments and sentences to date.

The links between politicians, economic powers, and paramilitaries have not been sufficiently used by the Attorney General’s Justice and Peace Unit to demonstrate the patterns of support and connivance in the regions and, thus, reveal the political, economic, and criminal dimensions of the paramilitary phenomenon.

One of the major flaws of the justice and peace process has been that the large quantity of valuable information collected through the testimonies of the postulados and the verdicts has not been transformed into a historical truth–or social truth–which allows Colombian society to understand the magnitude of the paramilitary phenomenon and its complex relationships with the armed forces and a significant number of politicians. In this case, it is not only the Justice and Peace Law that is to blame, but the unrealistic expectations that it created. The objective of the criminal process is to clarify and attribute criminal responsibility for the serious violations of human rights committed by these marco-criminal structures. However, it cannot clarify the truth in all of its complexity and intricacy, beyond the possibilities of judicial truth, nor can it provide redress for a vast number of victims, which is what the justice and peace process was faced with.

These unfulfilled promises have inevitably led to greater frustration, especially on the part of the victims: the country told them that each individual crime could and would be clarified through the justice and peace process, promised them that the reparations process would be rapid and effective, and also led society to believe that the criminal process would be able to clarify the deep-rooted causes of the paramilitary phenomenon. These are tasks that still pending and must be addressed by other means, such as the ongoing administrative reparations programs or a future truth commission.

It would be a crass mistake not to take advantage of the experience and knowledge acquired during these eight years of implementation of the justice and peace process. Prosecutors, attorneys, magistrates and everyone working in these judicial processes have incorporated the standards of International Criminal Law, are aware of systematic crimes and the tools that should be used for their investigation, which are different from the classic investigative tools of the ordinary justice system.

It is possible that some former paramilitaries may be released this summer, if they have effectively contributed to truth and reparations. As the Attorney General has rightly noted, this is the result of the rules of the game that were agreed to in 2005. But now we have the opportunity to establish new rules in what may be a historic process in Colombia: the peace negotiations with the guerrilla organizations. Justice and Peace leaves us with many lessons learned; let us not squander them.

This article was previously published by Open Democracy.

Read more about the Justice and Peace process here.