U.S. Needs Justice for the ‘War on Terror’ 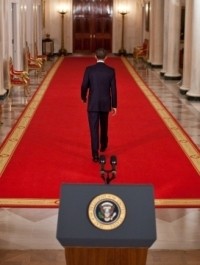 Presented at “The Obama Administration and Human Rights” hosted by American University in Washington, DC for the panel entitled “Accountability for Past Policies and Practices”

I have been asked to discuss ICTJ’s U.S. Accountability Project, which focused on accountability options for abuses committed in the “war on terror” and how they might be implemented.

I will start by noting ICTJ’s work generally is carried out in post-conflict societies—such as the Democratic Republic of Congo and Uganda—or post-authoritarian societies such as those in Latin America, Eastern Europe or now in the Middle East and North Africa. I have recently been to Tunisia, where these revolutions began, and transitional justice will play a key role. We do not often find ourselves working on issues in countries that have a long tradition of adherence to the rule of law, such as the United States.

Nonetheless, the concept at the heart of ICTJ’s work is that serious abuses of human rights must be reckoned with and addressed; these abuses must be confronted, they cannot be buried. This principle applies not only to countries of widespread and massive human rights abuses and state collapse but to some countries that have traditions of respect for human rights and the rule of law. Thus, for example, in Canada we are providing technical advice and assistance to the Canadian Truth and Reconciliation Commission, which deals with historic systematic abuses of individuals of First Nations’ origin (or in the U.S. parlance Native American), particularly in enforced residential schools.

Transitional justice posits in order to move forward to a peaceful and democratic future, the past must be addressed, through truth, criminal investigation and prosecutions, recognition of the suffering of victims through reparations and similar programs, and through institutional reforms—particularly of the security sector. We see these mechanisms working in a complementary manner. There also needs to be a political opening, which provides the opportunity to address abuses in a way that is, usually, officially recognized and sanctioned.

In the case of the abuses committed in the U.S. “war on terror,” the political opening came via the 2008 election and the pledges of the incoming Obama administration to address human right abuses—there was a transition and this was the entry point of our project on accountability, which we completed late last year. Of course, there has been considerable disappointment in the lack of follow through on the pre-election pledges made to address those abuses, but in my view this is all the more reason to underline the importance of the findings of ICTJ’s project and to press on with the implementation of our recommendations.

In thinking of transitional justice, it is important at the outset to note criminal justice is at the heart of the concept; those who are most responsible for serious crimes should be held criminally liable for their actions. As a former international prosecutor, I stand fully for this. However, it is important to recognize criminal justice processes tell only the story of a particular case before the court; the criminal justice process cannot hope to tell a more complete story of abuses and who was responsible. Thus, criminal justice needs to be complemented by truth-telling processes. There are various methods that have been adopted, truth commissions—for example in South Africa and Peru—and commissions of inquiry being the most prominent examples. Moreover, victims’ rights need to be redressed and appropriate institutional reforms undertaken.

In the cases of the abuses committed by U.S. officials—here I refer to torture, arbitrary detention, secret prisons, “black sites,” illegal domestic surveillance and unlawful attacks on civilians in Iraq and Afghanistan—we recommended in our study the formation of an independent commission of inquiry. This proposal is based on the concept of the “right to truth,” an emerging right under international law. Based on reports of the International Committee of the Red Cross (ICRC), Freedom of Information Act (FOIA) releases and work by international reporters and NGOs, there is considerable information pointing to serious and systematic abuses by the U.S. government and its officials. An independent commission of inquiry would be able to pull this information together and expose the truth in an official way—much preferable to the rather informal drip of truth we get from WikiLeaks, in my view.

The second element we looked at in our U.S. Accountability Project was prosecuting abuses of detainees. We published Criminal Justice for Criminal Policy: Prosecuting Abuses of Detainees in U.S. Counterterrorism Operations partially in response to U.S. Attorney General Eric Holder’s appointment of a special prosecutor to conduct a preliminary investigation to determine whether federal crimes may have been committed in detainees’ interrogations.

After we looked at the structure of what happened, we found that there was substantial evidence of “system crimes,” meaning crimes that occur on a large scale and were perpetrated as part of official sanctioned policy. Thus, we looked to the actual commission of the crimes—sometimes referred to as the “crime base”—in places and situations such as Guantanamo, Afghanistan and C.I.A. dark sites. We then looked at how evidence linked these events to a shared official knowledge of sanctioning these abuses, for example “enhanced” interrogation and torture. These actions are clearly crimes under the UN Convention Against Torture and U.S. federal law.

In our report, ICTJ analyzed this evidence and material and made the following findings and recommendation:

We addressed the element of reparations as the third element in our project in a report titled After Torture: U.S. Accountability and the Right to Redress.

While a number of people who suffered abuses were innocent, there were others who were implicated or directly responsible for serious crimes. Thus, while redress and reparations are a requirement of law we were aware of very significant potential barriers to having redress for the latter category. This we have to acknowledge up front.

There are a number of international legal obligations that the U.S. government has undertaken that create a right to reparations:

However, U.S. law and policy contains significant barriers to redress for victims by U.S. government action. This is contrary to the approach taken to abuses by other governments. For example, via the Alien Tort Claims Act, those injured outside the U.S. have a means to recover for their injuries from their tormenters. While there have been a few successful claims by victims of the U.S. “war on terror” under U.S. law—using the Foreign Claims Act—there are many barriers to claims. Put simply, the obstacles are high, with official immunities and other procedural hurdles, and there is no specific reparations law in the United States.

In order to address these lacunae, ICTJ’s report highlights the elements of a proper reparations approach:

We looked at how these elements could be addressed, so the victims of these abuses could obtain the redress they are entitled under international law—obligations the United States has undertaken to provide—and how these could be implemented.

In conclusion, ICTJ’s work on U.S. accountability has highlighted relevant issues and put accountability on the table using comparative experience from a variety of other contexts. Moreover, through our work and that of others, it now seems clear that the idea of a broad amnesty for gross violations of human rights has receded. The project has also helped put international law and the United States’ international obligations at the center of the debate. Of course, we must recognize and work together to see much more fruit is borne out of these efforts. At present, despite several years of the Obama administration, little has occurred on the accountability front. Moreover, the challenges are significant in both raising the public consciousness on this issue and getting the administration to take the right steps. It will take much more work from civil society and folks like those in the audience today to accomplish this.

Photo: President Barack Obama walks through the Cross Hall of the White House after delivering a statement to the media on the mission against Osama bin Laden, May 1, 2011. (Official White House Photo by Chuck Kennedy)