Victims in Cote d’Ivoire Meet on Right to Reparation 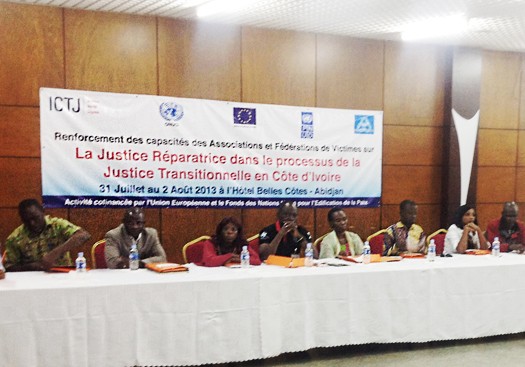 Last week, victims’ organizations in Cote d’Ivoire joined ICTJ and the ONUCI Human Rights Section for a three-day training session in Abidjan on reparative justice and the right to reparation.

In Cote d’Ivoire, victims of the 2010-11 post-election violence have yet to receive reparations for violations that occurred during the political upheaval following the election of President Ouattara. Until the government terminated the institution in November 2012, the Ministry of Ex-Combatants and Victims was responsible for registering victims and delivering measures of support and assistance.

Now, victims groups say they no longer know where to turn for assistance.

As a result, they requested assistance from ICTJ for training and technical support to help them engage with national authorities and participate fully in the various TJ processes.

More than thirty participants from Abidjan and the regions participated, included women and youth – groups often marginalized in national politics – to ensure they learn how to advocate for their right to redress and reparations in a knowledgeable and proactive way.

"This is the first time that leaders of victims’ groups are being brought together for a training [like this]," said Mr. Soumahoro Drissa, a victims’ group spokesman. He welcomed the training, saying it would allow for leaders to gain the basics for "advancing their struggle."

The conference opened with an introduction to transitional justice, focusing on reparative justice and illuminated by examples of reparations programs in other countries.

In his opening remarks to the gathering, Mohamed Suma, ICTJ’s head of office in Cote d'Ivoire, said that the meeting sought to strengthen victim participation in transitional justice mechanisms, particularly in discussions of reparative justice.

“This training will help organize a discussion with victims as part of national consultations,” said Suma. “It also aims to encourage the establishment of connections between victims and national institutions that are supposed to be working on victims issues.”

The event provided a new space for dialogue between victims and the leadership of Cote d’Ivoire’s Commission on Dialogue, Truth and Reconciliation (CDVR).

“We recognize all of the suffering of all the victims," said Abdoulaye Kone, president of the reparations commission of the CDVR, who attended the Abidjan conference.

Mr. Kone also stressed the need to involve victims in all initiatives concerning them, and the workshop will allow them to "better articulate their needs and become more aware of their expectations."

The cautionary tone was echoed by Marguerite Bukuru, the head of the Transitional Justice unit in the Human Rights section of UNOCI. She underscored the fact that while the war victims have "legitimate claims," she urged them to be patient. "The reparations process is a long-term endeavor," she said.

The training also provided opportunity for victims to interact directly with other state institutions that are supposed to be working with them including the special investigative cell (Cellule Speciale d’Enquete), the newly established Programme Nationale de Cohesion Sociale and the Directorate of Victims.

At the end of the three days, ICTJ offered methods and strategies for victims’ groups and communities to engage effectively with the government. By encouraging participation through a question-and-answer format, the training was designed to initiate discussion and help connect victims’ groups who may want to take collective action.

Photo: Participants at the 3-day conference in Abidjan, Cote d'Ivoire.