On International Youth Day, ICTJ reaffirms the importance of engaging youth in efforts to reckon with the past in societies grappling with repressive and violent histories. 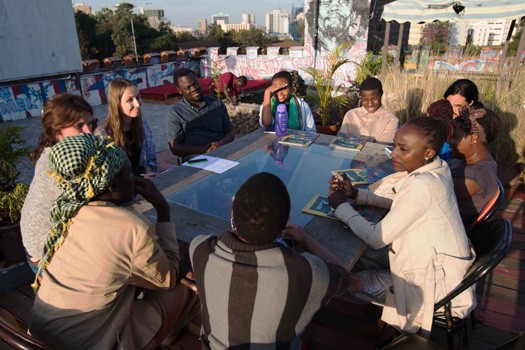 “We are the next generation. After 10 years, we are going to be the adults, the lawyers, the prime ministers. We have to know [the truth] when we are young, so when we are older we can make sure this doesn’t happen again.” —Andrea, Canada

As one youth leader we spoke with in Canada about the legacy of the Indian Residential School remarked, learning from the past is fundamental to equip a nation’s rising generation with the knowledge and skills to build and sustain peace. This is why, on this International Youth Day, ICTJ reaffirms the importance of engaging youth in efforts to reckon with the past in societies grappling with repressive and violent histories.

Legacies of unaddressed violence and abuses are likely to be socially divisive, to generate mistrust between groups and in the institutions of the State, and to hamper security and development. The long term impact of such unaddressed violations erode the rule of law and can fuel new cycles of violence and hatred. Efforts to address them and provide acknowledgment, accountability, and reform, can help rebuild trust and respect among communities and citizens, and between citizens and state institutions, and ultimately prevent the recurrence of conflict and abuse.

CDI: Youth Confront the Past to Foster “Positive Politics”

“We are working to change the mentality of Ivoirians in the long term so that they become active in the struggle for peace.” —Amandine, CDI

The transformative effect of transitional justice efforts in part depends on the active participation and engagement of youth.


As formal transitional justice mechanisms in CDI —including a truth commission (Commission Dialogue, Vérité et Réconciliation, or CDVR) or efforts to investigate perpetrators of the election violence— have so far been unable to deliver on their mandates, the RAJP is committed to tell a new history of the violence that has so far not been heard. ‪

To this end, the RAJP activists organized dialogues within their own organizations about the past conflict and enduring obstacles to peace. Based on the testimonies of their peers, they produced a radio report capturing the experiences of young people during and after the crisis, and long-term consequences of violence that targeted children and youth.

Conscious of the potential for new conflict as the 2015 presidential election approaches, the RAJP members are now taking their audio report outside of Abidjan, to speak with youth in the countryside about how to prevent a repetition of the 2010 post-elections violence, hoping to foster “positive politics” among their peers.

“It is very important for us to make a change, brush-off the stereotypes, and brush-off those racist views, so we can really move forth and improve the situation for future generations.” —Gabrielle, Canada

As youth in CDI mobilize to call for peaceful elections and for their needs be included in the reparations law currently being drafted, across the globe, youth in Canada are making their own calls for reform. Their focus is on education and the lack of knowledge and discussion on the legacy of Indian Residential Schools (IRS) —a system by which the government forcibly removed indigenous children and placed them in church-run boarding schools where they were not allowed to speak their language, follow their cultural traditions, and where many suffered physical, psychological, and sexual abuse.

The recently released TRC report highlights the way this policy of systematic abuse continues to impact on today’s indigenous populations, particularly youth. Yet many Canadians do not even know about this dark episode of the country’s past.


This video follows in the footsteps of another youth-led effort to reckon with the legacy of the IRS: at the Inuvik National event in 2011, two young women presented a video they produced following an ICTJ/TRC youth retreat, highlighting the racism endemic in their community stemming from the legacy of residential schools. The honesty with which teenagers spoke of their ignorance of the Indian residential Schools and their legacy, or of the racism they suffer, caught the attention of leaders in Northwest Territories and spurred them to reform the curriculum in their province to include this film and to provide much more detail and time to learn about and discuss this tragic chapter of Canadian history.

Kenya: Learning from the Past to Build a New Kenya

“In my experience I’ve seen how engaging youth in our past mistakes and our current challenges is really a good way to motivate them and inspire them to engage in efforts that are geared towards social change,” —Carine, Kenya

Working towards genuine youth engagement in transitional justice involves advocating for the inclusion of young people in the larger national process of accountability and reform. In Kenya, to generate dialogue and debate about justice and reform beyond the life and bounds of the Truth, Justice and Reconciliation Commission (TJRC), ICTJ produced a discussion booklet based on the TJRC final report, targeted at secondary school students (ages 14-18). Last month, ICTJ met with youth leaders in Nairobi to discuss how this booklet could help students critically reflect on their country’s past and become active and engaged citizens.


Across contexts, the youth we spoke to all agree that even if hard, the truth is important, and the core basis for meaningful civic engagement: “We can’t construct a national identity without a national truth,” shared a Kenyan youth leader during an ICTJ workshop in Nairobi in July 2015. We have seen this engagement inspire youth to advocate for and demand accountability and reform, and prepare them to effectively contribute toward the [re]building of a society committed to respect for human rights and sustainable peace.

On this International Youth Day, as the world calls for youth civic engagement to be prioritized and strengthened, we at ICTJ recognize that a crucial aspect of such engagement lies in creating opportunities for young people to engage with their past. As a Kenyan youth leader exclaimed: “Knowledge is power. If the youth are aware, there is hope for a better future, a better Kenya, a better Africa, a better world.”

ICTJ talked to Kenyan youth leader Carine Umutoniwase to reflect on how learning from a violent past inspires youth in countries recovering from conflict and repression to avoid past mistakes and to come up with solutions that contribute towards a more just and accountable society. Watch the interview here.