In Lebanon, Students Grapple with the Truth About Their Country's Painful Past

ICTJ held a two-day workshop on transitional justice for a group of university students in Beirut on February 14 and 15 as part of its ongoing support to the Committee of the Families of the Kidnapped and Disappeared in Lebanon. The students are currently serving as volunteers on a project to create an archive of the committee’s decades-long struggle and activism. 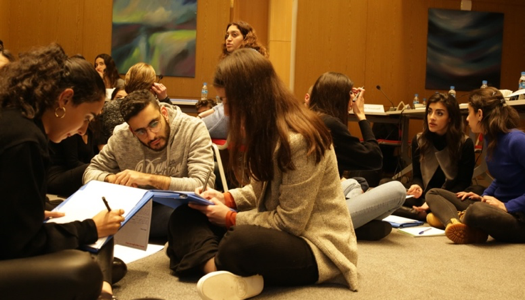 The International Center for Transitional Justice (ICTJ) held a two-day workshop on transitional justice for a group of university students in Beirut on February 14 and 15 as part of its ongoing support to the Committee of the Families of the Kidnapped and Disappeared in Lebanon. The students are currently serving as volunteers on a project to create an archive of the committee’s decades-long struggle and activism. The workshop—which consisted of expert-led seminar discussions on a range of topics, creative group activities, and a screening of a documentary film about daily life during Lebanon’s Civil War—sought to help these young volunteers better understand the country’s legacy of human rights violations, its transitional justice processes and their significance, and the role they can play to advance truth and justice.

“Why are we talking about the Lebanese Civil War? Why are we revisiting our painful past?” asked ICTJ’s program expert on Lebanon, Nour El Bejjani Noureddine, to the workshop participants in the first session. “Lebanon has failed to deal with its own past. We don’t know the truth about 17,000 disappeared people. There has been no reparations nor justice to the victims and their families,” she continued. “You, the youth, are leading the ongoing revolution in Lebanon. You will shoulder a big share of responsibility for institutional reform, for accountability, and in participating in all transitional justice processes.”

Much of the workshop focused on the abuses that occurred during the civil war and their lasting repercussions on victims and their families. Since Lebanon’s national educational curriculum does not cover the civil war, and families often never bring it up, it was the first time many of the student volunteers ever heard about these past atrocities. “It’s a whole world we weren’t aware of because of the government’s efforts to obscure this issue,” one of the students said. The young volunteers all expressed a strong desire to know more about the war and contribute to the committee’s work. “Our parents and older relatives who lived through the war tell us not to talk about it; it is from the past and we are over it now,” another student explained during the workshop. “But are we really over it?”

Among those leading the workshop was Wadad Halwani, the founding head of the Committee of the Families of Kidnapped and Disappeared in Lebanon. She gave a brief history of the country’s kidnapped and disappeared persons, the movement she helped create to uncover the truth about their fate and achieve justice for their families, and the recently passed Law 105 on the Missing and Forcibly Disappeared Persons in Lebanon and what it means to the families. She also discussed why the issue matters to young people and all Lebanese, connecting it to the concerns animating the revolution today. “We can’t just simply turn the page, and the current revolution in Lebanon is validating this,” she said.

Discussions during the workshop often revealed ways in which the struggle for truth and justice for past abuses mirrors that of the protesters now in the streets who are demanding economic and institutional reforms, more and better employment opportunities, and an end to the endemic corruption and sectarianism of the country’s political elites. “While trying to understand the current economic crisis and grievances that led to the October 17 revolution, the young volunteers also had to begin to examine the systems that were set up after the war,” offered Sibley Hawkins, an ICTJ program expert who co-led the workshop. “I believe this brought to light how devastating the past decades have been for Lebanon, especially in terms of the sectarianism that was deeply entrenched in all facets of life in the country. Young people have more questions than ever about the past and the war, in order to fix what is happening today.”

Hawkins introduced the students to the concept of transitional justice, asking them first to share their own ideas about the topic. It is a healing process, she explained, a process of questioning and understanding, that should lead to a change in societal norms that once allowed for violence and corruption. As the workshop concluded, there was a palpable sense in the room that participants understood their responsibility to participate in and lead Lebanon’s transitional justice processes, and thereby contribute to sustainable peace and national reconciliation. For now, these and other motivated students will continue volunteering their time to build a dynamic and user-friendly archive to house and catalogue all the documentation—new and old—that the committee of families of the kidnapped and disappeared has been collecting for almost four decades.

PHOTO: Student volunteers participate in a group exercise as a part of the ICTJ workshop on transitional justice and the right to truth in Lebanon. (Firas Bou Zeineddine/ICTJ)