With Violence Against Women on the Rise Around the World, ICTJ’s Gender Modules Offer a Timely Training Tool 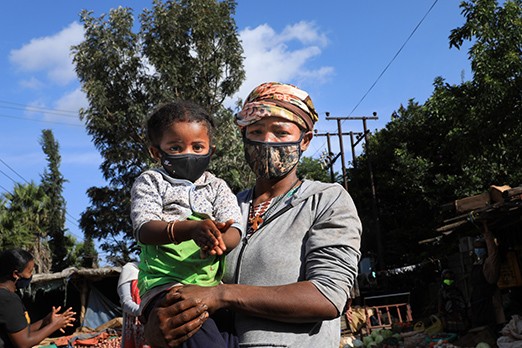 In what UN Women describes as the “shadow pandemic,” rates of violence against women have soared since the public health and economic crises brought about by COVID-19. Since March 2020, countries around the world have implemented varying degrees of stay-at-home orders to curb the spread of the disease. Telecommuting or newly unemployed, family members find themselves confined to their homes, and with one another, in often stressful circumstances. As a result, women are more susceptible than ever to domestic violence, while public health measures restricting movement make it harder for them to access resources and find help when they experience it. This perfect storm is especially concerning in countries where conflict or repressive rule have made women more vulnerable to violence. In these societies, all forms of violence against women are on the rise. This trend mirrors the increased incidents of trafficking, child marriage, and sexual exploitation that were reported in areas affected by the 2014-2016 Ebola outbreak.

ICTJ has taken note of this spike in violence against women in the countries and regions where it operates. In Colombia, for instance, the rate of femicide (the killing of women because of their gender) has climbed sharply since the pandemic began. In September alone, 86 femicides were recorded, more than double the monthly rate earlier in the year and the highest monthly total since researchers began documenting them in 2017. In a recent study on gender-based violence within displaced and refugee communities in 15 African countries, the International Rescue Committee found that, since the start of the pandemic, 73 percent of women reported an increase in domestic violence, 51 percent mentioned sexual violence, and 32 percent observed a greater occurrence of early and forced marriages.

This staggering surge in violence against women since the onset of the coronavirus pandemic stands as a stark reminder that sexual and gender-based violence remains a serious human rights issue, particularly in fragile states. “Without a gender-sensitive approach to addressing legacies of violence, it is very likely that any response will overlook both patterns of gender-based violations and the ways that victims may experience conflict and human rights violations differently because of their gender,” explains ICTJ Expert Sibley Hawkins. Not only are women victims overlooked, she says, but so too are LGBTQI victims and men and boy victims of sexual and gender-based violations.

“If you take what has been euphemistically called a gender-neutral approach, you are going to get a gender-blind transitional justice process,” warns ICTJ Senior Expert Kelli Muddell. However, by reaching out to and directly engaging with women and victims’ groups and asking the right questions, stakeholders can begin to build an inclusive, gender-sensitive process. Both Hawkins and Muddell cite the Women’s Committee within Tunisia’s Truth and Dignity Commission as having taken a largely successful approach to including women victims in the process, particularly because of its willingness to adapt the methodology along the way. Early on, the committee discovered that women were not coming forward to give their statements for a variety of reasons, including fear of social stigma, lack of knowledge about the commission and how to engage with it, and not identifying as a victim entitled to participate in the process. In response, the Women’s Committee sought the support of a coalition of women’s organizations and adapted its approach, participating in concerted awareness-raising activities, particularly in regions outside of the country’s capital, and establishing a secure telephone line for women who felt too unsafe or were physically unable to submit a statement in person. As a result, the number of women’s submissions to the commission increased significantly.

While some recent transitional justice processes have made great strides in successfully implementing gender-sensitive approaches, others have fallen short. Stigma surrounding certain crimes such as sexual violence, difficulty reaching out to women and other victims of gender-based violations, and a failure to engage with civil society organizations that focus on these issues are some of the main reasons that processes can be unsuccessful, says Hawkins. In Northern Uganda, for example, ICTJ found that the Ugandan government did not sufficiently address the needs of the women who endured sexual violence during the country’s conflict in the region and the children they bore as a result of this violence. Though, with the recent passage of the transitional justice policy, there is renewed hope they will finally receive the reparations they are owed. In Nepal, the government instituted an interim relief program in 2008 that provided material benefits to approximately 30,000 survivors and relatives of the killed and disappeared. However, this program specifically excluded victims of torture, thus denying victims of sexual violence any relief.

In an effort to advance gender-sensitive approaches to transitional justice processes, Hawkins and Muddell created the ICTJ Gender Modules. The modules offer a training program and extensive resources on gender issues relevant to the transitional justice field. “It is a comprehensive resource in terms of gender justice,” says Muddell. “It can be used for self-enrichment, but also as an interactive training tool that could be used by national and local civil society leaders with women victims or government actors who may not know how to implement a gender-sensitive approach.” ICTJ released the modules in October 2018 at a workshop in Kosovo hosted by UN Women to foster the exchange of knowledge, good practices, and lessons learned about promoting gender-sensitive responses to conflict and violence. Two years later, the Gender Modules remain a powerful instrument for building capacity and providing concrete examples on how to do just that.

The Gender Modules consist of six parts on topics including truth seeking, reparative justice, criminal justice, memorialization, and women’s voices and participation in transitional justice processes. Each module includes a PowerPoint presentation and an accompanying set of detailed speaker notes to guide the trainer. Designed to be adaptable to a broad range of contexts and circumstances, each module can stand alone or work together with the others as an integrated training program. “For us, these modules were a great way to convey ICTJ’s wealth of knowledge and experience of past conflicts, and to consolidate lessons learned for the future,” explains Hawkins.

In the current global public health emergency and economic downturn, women and other vulnerable groups, especially those in countries affect by conflict or repression, are at increased risk of experiencing sexual and gender-based violence. The Gender Modules thus offer a timely tool to raise awareness about the issue and help develop gender-sensitive responses to it. ICTJ invites organizations, practitioners, and stakeholders in transitional justice processes to explore the modules, adapt them freely, and share them widely with their networks.

PHOTO: Four-year-old Beamlak rubs her hands with sanitizer. Her mother, Aster Bizago, makes a living by selling vegetables in Addis Ababa, Ethiopia. Since the coronavirus pandemic, Aster has seen a decline in her earnings and worries about her family's safety and well-being. (UNICEF/Nahom Tesfaye)