Ten Syrian human rights organizations have been working in partnership with the International Center for Transitional Justice (ICTJ) to document and expose the long-term impacts of the attacks to and the destruction of schools in Syria. The project, Save Syrian Schools, will present its findings in a public hearing-style event in Geneva on March 22nd, at Forum Genève. The project works creatively to document human rights abuses and includes a public hearing-style event, multimedia, and high-level dialogue. 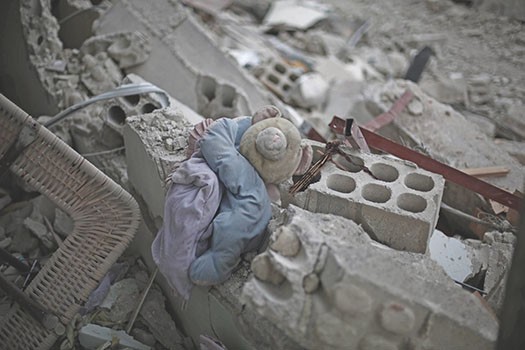 GENEVA—For the past year, ten Syrian human rights organizations have been working in partnership with the International Center for Transitional Justice (ICTJ) to document and expose the long-term impacts of the attacks to and the destruction of schools in Syria. The project, Save Syrian Schools, will present its findings in a public hearing-style event in Geneva on March 22nd, at Forum Genève, from 9 to 13 hrs.

Four Syrians directly affected by attacks on schools (see bios below) will share their stories before a Panel of Conscience formed by:

“The Most Documented Conflict in History”###

As Syria enters its 7th year of war, Syrian activists continue to find strength to relentlessly document on the ground the suffering of victims, the crimes committed and their tragic impacts and consequences in the civilian population. Despite the scarcity of means they work with, often risking their lives, they are the ones responsible for having created an immense archive of information that gives testimony of what many people call “the most documented conflict in history.”

Civil society groups’ primary motivation for proper documentation of the crimes committed against civilians, especially in the early stages of the conflict, has been to create evidence for potential future criminal prosecution trials.

Due to the uncertainty of the war’s outcome and how and when such trials would be able to take place, many Syrian civil society organizations have expressed sentiments of frustration and doubt to the usefulness of such documentation.

The Save Syrian Schools Project###

After months of collaboration and providing technical assistance to Syrian organizations documenting human rights violations, the ICTJ decided to create a working group focusing on one topic. In March 2017, the ICTJ met with 10 Syrian organizations in Istanbul for the first time, embarking on an unprecedented collaboration to use innovative documentation strategies towards achieving justice beyond criminal prosecution. The group met every month and a half in Istanbul, over the course of six workshops. Save Syrian Schools is the result of one year of constant collaboration that will culminate in the public hearing event in Geneva, on March 22.

Save Syrian Schools aims to show the world – especially those with the power to take action such as the UN and those governments involved in peace negotiations – the tragic impact and deep consequences of attacks on schools. The project draws on the strengths and capacities of the diverse participating organizations to examine the human impact of attacks on schools on Syrian society and to promote accountability for those crimes.

The collaboration has generated several different products to highlight the results of its collective research and analysis. These include an online platform, a forthcoming written report, and the public hearing style-event.

Learn more about the project at SaveSyrianSchools.org.

If you are not able to attend the event in Geneva, a livestream will be available on ictj.org.

About the Victims Who Will Speak Before the Panel of Conscience###

Mohamad Shehab Mohamad Shehab was born in January 5, 2002. He used to live in Damascus but in 2011 – when the revolution started – security forces began to crack down on activists and came to his apartment on several occasions. This led Mohamed and his family to move to Douma in late 2011. They stayed in Douma until the end of 2015, when life conditions became increasingly difficult because of continuous aerial attacks and the siege that was imposed on the city. In November 2015, Mohammad was finally able to leave Douma and he and his family moved to Lebanon. In early 2016, Mohammad arrived in Switzerland, where he found refuge. Today he lives with his family in Yverdon, a small, calm city in Switzerland.

“I have witnessed several attacks on schools, and I have seen a girl falling dead in front of me in a school. My best friend, Ammar, was killed right after school time, since then I stopped going to school.”

Raneem Mahrous Raneem left Syria at the end of 2013. Before that she was living in the city of Aleppo. What Raneem witnessed in Aleppo once the conflict began, was one of her main reasons for leaving. After the escalation of shelling and the use of air strikes daily, Raneem had no choice but to leave her home and city in order to protect and ensure the safety of her children. Raneem is a housewife who spent her life raising her children. She believes that protecting her children is her priority. Raneem currently lives in Geneva with her children where they are attending school.

“I started screaming searching for Sami until I spotted him sitting on his knees, crying, hinding and scared. I hugged him and started to kiss him and shouted, ‘Thank God’. Since then I vowed not to send them to school anymore.”

Rama Mahmoud Rama Mahmoud is from Raqqa. She left Syria in early 2014 because of the worsening situation and so that she could give her children a better future. She is originally a lawyer, and she later became a teacher. She is also a mother of two children. Rama is currently living in Frieberg, Switzerland where she is still active in supporting the Syrian uprising and is involved in activities such as organizing protests and working with INGOs to make Syrian voices heard.

Rama witnessed one of the massacres that took place at Ibn Tufail Commercial Secondary School in Raqqa, as she happened to be close to the school when it was attacked. She immediately rushed to the scene of the attack with a group of young journalists to cover the incident, and what she saw has stayed painfully with her to this day.

“Since that day, schools, universities and education have ceased to exist in Raqqa. This was followed by Daesh occupation for years, which destroyed the education process in the city and deprived a generation from its right to education. My children have faced a very difficult experience as they insisted on learning, but many obstacles prevented them from doing so.”

Tarek Al Massri Tarek left Syria in 2014. Before that, he was living in Homs, in a neighborhood known to be anti-regime and, therefore, a major target of armed clashes. Tarek attended a school in another neighborhood, known to be a pro-regime area, but armed clashes in his home area and fear of being targeted for being from his home neighborhood forced him to change schools. In his new school, however, the situation was not any better. That school was targeted by snipers, which led to several killings and injuries witnessed by Tarek.

“Many were shot that day, I saw a friend of mine get shot in the head, I saw one was shot in his leg and another one in his stomach. With no proper medical care, it was impossible to save their lives. My friend died immediately. Another one died two days later in the field hospital, and I still do not know what happened to the third student I saw getting shot that day.”

PHOTO: A child's plush toy lies in the rubble of a destroyed building in East Ghouta, suburban Damascus. (UNICEF/Al Shami).