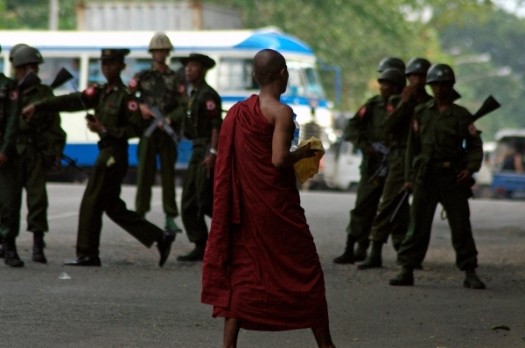 NEW YORK, July 22, 2014 – Continuing political repression, cronyism, and ongoing conflicts are disrupting attempts to put Myanmar on a linear path to democracy, peace, and development, says a new report from the International Center for Transitional Justice.

The spread of anti-Muslim violence to Mandalay and the recent harsh sentencing of some journalists show that Myanmar’s transformation into a prosperous, functioning democracy is still far from guaranteed. According to the report, titled “Navigating Paths to Justice in Myanmar’s Transition,” dealing with current and historical abuses is essential to achieving genuine progress on peacebuilding and economic development in the country.

“Myanmar’s transition has not yet taken root,” says Patrick Pierce, co-author of the report. “The military still wields significant political power and influence. The continuing dominant role of former generals and business cronies comes with a reluctance to address both ongoing and past violations.”

Conflict and high levels of political repression have racked Myanmar for more than 60 years, during which time state-sponsored human rights violations were routine. Attempting to defeat ethnic armed groups and any form of political opposition, Burmese security forces killed, tortured, imprisoned, and displaced thousands in the country.

Both President Thein Sein and opposition leader Daw Aung San Suu Kyi have repeatedly highlighted rule of law and good governance as priorities for Myanmar alongside the development of a modern market economy and democracy.

After three years of reforms, initial steps are being taken to hold government and elites more accountable. Parliamentary investigations are being held into land confiscations, the government created a national human rights commission, and the president’s office has started efforts to investigate allegations of government corruption.

Yet high levels of mistrust and skepticism regarding the genuineness of reforms persist in some areas, particularly Kachin State, where renewed conflict has displaced over 100,000 people.

The ICTJ report provides concrete recommendations to development and reform actors on how to incorporate transitional justice into their programmatic tools. For example, it calls for reparations programs that would reduce the vulnerability and social stigmatization of certain groups, including former child soldiers and victims of gender-based violence.

“Donors and policy makers have made important commitments to support development and democratic reforms in Myanmar,” says Anna Myriam Roccatello, Deputy Program Director for ICTJ. “It’s time to link these more firmly with commitments from the government to uphold the rights of victims.”

The full report may be downloaded in English and Burmese.