African Americans and Police: To Repair Broken Trust There Must Be a Reckoning First

In today’s United States, civic trust that has been systematically eroded among many communities of color. There is little basis, either historically or in the current political atmosphere, for African Americans and other minorities to have this essential trust in government institutions, particularly in the police. To build that relationship, there must first be a reckoning, writes ICTJ President David Tolbert. 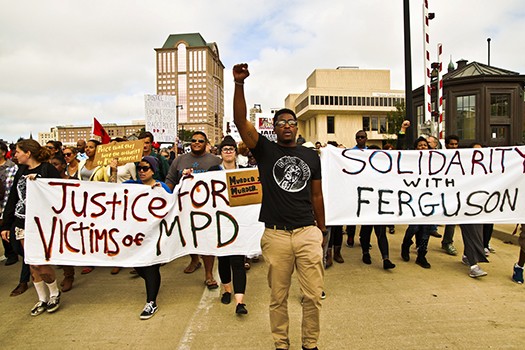 I have spent my career working in societies across the globe as they confronted legacies of unspeakable human rights abuses. I witnessed the struggle for justice in the former Yugoslavia, Palestine, the Middle East, eastern Europe, Cambodia, Lebanon and a host of other countries where ICTJ works. I have learned lessons from them all. But while my work has taken me far and wide, my roots remain in my native Carolinas. It was there that I started life in the de jure and de facto segregated South –apartheid by another name – and there I first developed the sense of justice that has guided my work since.

I return to the Carolinas this week to take part in a conversation that confronts the legacy of that troubled past. It will be held at the University of South Carolina in Columbia, where the confederate flag flew on the statehouse grounds until 2015 and was only removed in the wake of the massacre at Emanuel African Methodist Episcopal Church in Charleston. While I have taken part in similar conferences across the globe – often in places that are boiling with injustice – this trip resonates at the most personal of levels.

A History of Resistance

When Republicans were the party of Lincoln and not of Trump, my South Carolina family were Republican activists who opposed slavery, resisted secession, and fought for the rights of African Americans. For this they suffered assaults and abuses, although unlike their African American allies they had a choice on how to live their lives. In 1898, their attempts to help African-Americans vote led to white supremacists murdering over a dozen African Americans and shooting and severely wounding several of my ancestors in what is known in the history books as the “Phoenix Riot.” Thereafter, the Tolberts were repeatedly burned out of their homes, eventually leading them to build a house made entirely of stone with iron furniture, known as the “Rock House”, located outside Greenwood, South Carolina.

Building on this family history, my paternal grandfather, a South Carolina lawyer and former US Attorney, was a lonely crusader for civil rights in the 1930’s. He represented African-Americans inside and outside the courtroom and was a tireless advocate for civil rights in a deeply uncivil time. He was physically assaulted on the streets of Greenville, South Carolina on several occasions, his jaw was broken and crosses were regularly burned on his lawn. One of his black clients was savagely beaten and left lying in a pool of blood on his porch. My grandfather eventually caved under the pressure and committed suicide. The KKK celebrated, driving past his house with hoots and hollers of celebration, an experience that my father, age 12 at the time, could never speak about. That righteous family history – shamed by the “sin” of suicide - was effectively buried with my grandfather for many decades.

And while we can point to some progress since those days – and there have been symbolic breakthroughs from the election of an African-American president to progressive legislation – the racial dividing line in the United States remains largely unbroken. The exclusion of African Americans from political and economic life persists and the economic statistics point towards the continued impact of injustice: in many ways, economic inequality, largely still framed by race, is the issue that we have yet to face in a country of abundance but with the most disparate of wealth distributions.

The racial divide has very different dimensions than in my grandfather’s time. While we have formal legal equality, we are living in an era of mass incarceration of people of color. The United States has an enormous prison population, far outpacing other developed economies, and African-Americans and other minorities compose a staggering and disproportionate percentage of the incarcerated. We should be clear eyed about the realities of incarceration which have a very significant economic dimension. The labor of these inmates enriches others – states, corporate interests and the like. As has been so vividly portrayed in films like 13th and books like The New Jim Crow, the era of mass incarceration in the United States not only destroys families but is part of an insidious economic paradigm, providing incentives for further incarceration. It is a system that does nothing to address the underlying causes of violations of the law, much less provide any sort of rehabilitation.

This is the backdrop to the most visible dividing line between the races: the coercive authority of the police power as manifested in the yawning divide between law enforcement and African-American communities.

While the United States differs significantly from other countries that I have worked in, an essential element of all democratic societies that respect human rights is a sense of civic trust between citizen and state.

By civic trust, we mean that individuals have sufficient confidence in government institutions and authorities, including the police, the courts, and state itself, to protect their rights and to act in accordance with the law and due process. It also implies some basic fairness in terms of the distribution of goods and services as well as equal treatment under the law.

In today’s United States that trust that has been systematically eroded among many communities of color. There is little basis, either historically or in the current political atmosphere, for African Americans and other minorities to have this essential civic trust in government institutions, particularly in the police.

An Urgent Need for Reckoning

The current political climate in the United States is fomenting ever greater division. In the wake of the recent presidential election, white nationalism is on the rise, and we see the race card played with regularity by the highest officials in the land. This makes conversations like the ones that will play out in Columbia this week all the more urgent.

From my perspective – as a Southerner whose life has been shaped by the burden of southern history – addressing these issues is critical not only to the South but to the country as a whole. In the current moment, it is important that we go beyond the identification of the outstanding issues and begin to see government officials at all levels finally acknowledge and reckon with the direct links between racism and police misconduct.

An official acknowledgement of law enforcement’s role in abetting a system riddled with injustice is a crucial first step to an urgently needed reform. It is also time that the underlying economic construct of mass incarceration be frankly, officially acknowledged and addressed accordingly in a comprehensive manner. If African American communities are to regain a sense of trust in the institutions of the state, we must wrestle with our national history with directness and in truth.