Amnesty Does Not Erase the Truth

South Africa’s Constitutional Court recently made a landmark ruling on the right to speak the truth about crimes amnestied by the Truth and Reconciliation Commission. ICTJ Truth-Seeking Consultant Howard Varney speaks about the ruling and its significance for South Africa and other countries. 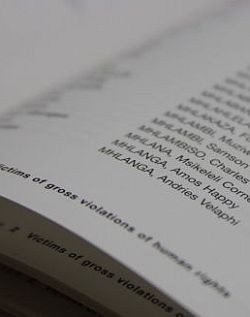 View the full May 2011 newsletter.

Q. South Africa’s Constitutional Court recently made a landmark ruling on the right to speak the truth about crimes amnestied by the Truth and Reconciliation Commission. Can you tell us how this case emerged?

A. The facts on this case go back to the mid-1980s, when a member of the armed wing of the African National Congress, Umkhonto we Sizwa, Robert McBride, bombed a drinking house in the city of Durban. Two women were killed in the blast and many others were severely injured. McBride was hunted down by the security police and arrested. He was charged with and convicted of murder.

When the Truth and Reconciliation Commission (TRC) started its work, McBride applied for amnesty. He argued that the bombing was a politically motivated offense because he said he had information that suggested that the bar was frequented by off-duty soldiers and other security personnel. In the end, he was granted amnesty. And if you look at Section 20 of the Truth Commission Act, the law says that “when amnesty is granted, the conviction is expunged for all purposes.” Those are the exact words.

Then about six or seven years back, McBride applied to become a municipal police chief in one of the municipalities near Johannesburg. One of the morning newspapers, a rightwing newspaper called The Citizen, ran a series of editorials and features in which they alleged that he was unsuitable for the post because he was in fact a convicted murderer. McBride objected, saying that it was unlawful for him to be referred to as a murderer because he had received amnesty, and that by referring to him as a murderer, the newspaper was making a false statement. The high court in Johannesburg agreed. The paper appealed to the Supreme Court of Appeal, which is the second highest court, and they agreed as well. The newspaper then appealed to the court of last resort, the Constitutional Court, and argued that this wasn’t what the Truth Commission was about, and it impinged unduly on their freedom of expression. The Constitutional Court agreed.

Q. How did ICTJ get involved?

A. It occurred to us at ICTJ and to our colleagues in the South African Coalition for Transitional Justice that the case had wider implications, and there were going to be some pretty harsh ramifications on victims. Some of the victims write books, speak to the press, write op-eds, appear on the radio and TV and so on. If they refer to perpetrators who murdered their loved ones, who were convicted and then amnestied, they would then open themselves up to a defamation lawsuit and they would have no defense.

So we decided to go to court in support of the families of two very well-known victims: the children of the late Victoria and Griffiths Mxenge. Both were human rights lawyers who had been abducted and brutally murdered by the South African Security Police. In the case of Griffiths Mxenge, the Security Police who were involved were granted amnesty. We also represented the family of Justice Mbizana, one of the Mamelodi Four, a famous case in which the bodies were discovered of four people who had been murdered by the Security Police for supporting the African National Congress.

Essentially, we argued before court that these two families represented all victims in South Africa in cases where the murderers of their loved ones had been convicted for murder and had received amnesty. The families asked the court to overturn the judgment of the lower court in order to do two things: to protect their freedom of expression to talk freely, and to preserve the legacy of the Truth Commission.

The primary objective of that commission was to discover the truth and to preserve that truth. For that to happen, victims and their families need the freedom to speak the truth without fear of being sanctioned by a lawsuit for defamation. In particular, they argued that to deny them this right would be to strip them of their right to dignity.

We highlighted the emerging international law principle of the right to truth. We suggested that although South Africa was not bound by a treaty obliging it to uphold the right to truth, that right was nonetheless enshrined within certain rights in South Africa’s Bill of Rights—namely the rights to dignity, access to information, freedom of expression, equality, and the rule of law.

The court essentially agreed with that argument. Justice Cameron, who wrote the majority opinion, said it was hardly conceivable that the provisions of the Truth Commission “could muzzle truth and render true statements about our history false.” He said that proscribing the truth would be antithetical to the adequate compilation of the collective memory of South Africa’s past.

This was an important victory for not just those two victims, but for all victims of past conflicts in South Africa. The court upheld the principles of openness and transparency that are underlying principles not just of the Truth Commission, but also of South Africa’s new constitutional democracy.

Q. What would have been the consequences if the precedents of the lower courts had stood?

A. It would have severely undermined the work and legacy of the South African TRC. It would also have meant that those amnestied would have received an additional benefit: the underlying facts of their particular cases couldn’t be held against them in any moral or public manner. No newspaper could refer to the perpetrators as murderers or kidnappers or torturers. They would now have to be regarded as individuals who, for all intents and purposes, didn’t commit those acts.

For the purposes of truth telling and establishing an impartial and accurate record, that would have been devastating for South Africa. It would have been particularly devastating for victims, because in order for victims to properly deal with the past and their suffering, they need to talk about the past and they need to engage with it. The rulings of the lower courts effectively denied them the right to do so publicly. The amnesty process was never meant to negate the truth. If anything, one of the rationales behind that process was the delivery of more truth.

Q. What’s the significance of this case for countries other than South Africa?

A. I think what’s enormously significant is that this is one of the first courts in a common law country, if not the first, to consider the right to truth. Courts in civil law countries, particularly in Latin America, have been down this road already. They’ve upheld the right to truth for victims, and some countries have even enshrined that right in their constitutions. Others have ruled that the right is incorporated within other rights in their constitutions. The Inter-American Court on Human Rights has upheld the right to truth, and those decisions are applicable throughout Latin America. The right has been upheld in national courts in Argentina and more recently in Colombia and Peru.

Outside of Latin America, the Human Rights Chamber for Bosnia and Herzegovina has ordered thorough investigations in order to inform family members of the missing, as well as the general public, of human rights violations.

Q. Is there any added significance given that South Africa’s reckoning with the past has been iconic for many around the world?

For those who wish to promote impunity, it would be very convenient indeed if the effects of a South African-type amnesty would be to obliterate the past. It would serve to sanitize the role of perpetrators in history and prevent them from being held accountable by the public. This would retard the transitional process and set the worst of examples for future generations. So we’re happy that a court in a common law country has upheld the right to truth in in a transitional setting. It’s an encouraging start.

Photo: A page from the TRC Report, listing names of those recognized as victims of gross human rights violations during apartheid.