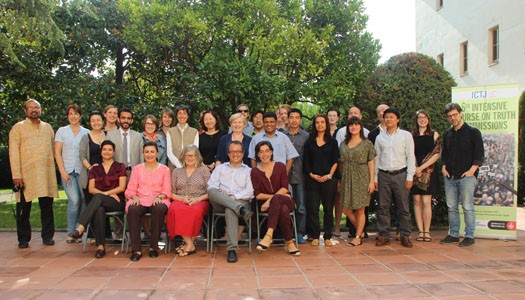 Transitional justice practitioners and activists from 18 different countries gathered in Barcelona to attend the 6th Intensive Course on Truth Commissions, organized by the ICTJ and the Barcelona International Peace Resource Center on September 29 - October 3. The course provided expert training on the design and implementation of a truth commission. This year, the course specifically focused on the intersections between truth commissions and peace processes.

Participants from Tunisia, Colombia, Nepal, and other countries embarking on the creation of a truth commission –or considering the possibility of establishing one in the near future– learned about the experiences of South Africa, Peru, East Timor, and other contexts through the first-hand accounts of ICTJ instructors.

“Complying with the victims’ right to the truth about mass crimes is a state obligation. But it has to be done right: you need to hear from those with real-life experience, how exactly does a truth commission work, and what are the many pitfalls to avoid and opportunities to seize,” said Eduardo González, director of ICTJ’s Truth and Memory Program. “This course is the place to ask those questions, and a perfect environment for advocates and professionals engaged in post-conflict and post-authoritarian environments.”

This year, ICTJ’s President David Tolbert joined the Barcelona course for the first time. Together with González, Tolbert opened the training with a conversation on the challenges truth-seeking mechanisms face when they emerge from a negotiated peace process, and how important it is to carefully analyze the local context to ensure the success of such mechanisms.

“At the course we were able to hear and discuss the challenges and concerns from those who are leading the efforts to establish truth commissions on the ground, where circumstances may vary largely from one context to another,” Tolbert said. “This was as enriching for us, ICTJ, as it was for the participants.”

During his time in Barcelona, Tolbert held a public talk tackling on the Spanish case and the unaddressed legacy of the crimes of the civil war and Franco’s dictatorship. At the event, organized by Memorial Democràtic, Tolbert stressed that “it is clear that the victims and society at large have seen a very limited amount of truth, justice, or reparations in response to abuses of the Civil War and the dictatorship periods that followed.” He also offered recommendations on measures to be undertaken by the Spanish institutions, such as exhuming mass graves, providing reparations for all victims, and opening the archives.

As every year, the course’s biggest asset was the array of participants involved in human rights, mediation, peacebuilding, rule of law, and transitional justice in their countries. Below we present a selection of portraits of some of them, and the admirable work they do.

### Sihem Ben Sedrine Barcelona to attend the Intensive Course on Truth Commissions, she traveled to different regions of Tunisia with her fellow commissioners to conduct consultations with victim groups and civil society organizations on their expectations of the TDC. “People are telling us: ‘You are our last hope,’” she explained. More important than reparations, she has noticed, for most Tunisians the priority is the acknowledgement of past crimes. “The answer is establishing the truth and dismantling the dictatorship’s machinery,” she said. “This way, we will at the same time be preventing the establishment of a new dictatorship and reestablishing the basic rights of the victims.”

armed conflict, never to be found again. He is now working on an oral history project, recording the stories of the victims and broadcasting them on the radio. “The State is not matching the families’ needs and priorities. I realized we needed to speak for ourselves and lead the process as the principal stakeholders,” he said. Between 1996 and 2006, approximately 1,300 people were forcibly disappeared in Nepal. Their families are still waiting for justice.

human rights violations running for election. “I thought there was no hope for transitional justice,” he said. About a year ago, he created the Facebook group Transitional Justice Supporters Network in Afghanistan, to "at least keep the terminology of transitional justice alive for future generations, so that they can learn about it, search for other examples abroad,” he explains. The group now has 99,977 members, which makes Faizi very proud. He posts photos from the civil war and exposes the violations committed by warlords, which develop into “very serious conversations.” “Public mobilization is key to open the way to the implementation of transitional justice,” Faizi said. “If people know the truth about the perpetrators, they will have no support and we’ll be able to prosecute them.” While attending the Barcelona course on truth commissions, Faizi admitted he was checking the group’s member counter “every second.” He added, smiling: “Hopefully today or tomorrow I will reach 100,000.”

It has been praised for bringing about reconciliation; however, few prosecutions were conducted, and victims are still waiting for the reparations recommended by the TRC to be implemented. “There’s still a skewed perception, even if we’ve been so vocal about our criticism,” she adds. At the 6th Intensive Course on Truth Commissions in Barcelona, Gunn shared her vision from the South African experience with participants from 17 other countries. “I’m very happy to share our experience with people from countries that are thinking about creating a truth commission-- to talk about the potential pitfalls, and how to jump over them,” she said.