The trial of Ratko Mladic for genocide, crimes against humanity, and multiple war crimes committed during the war in Bosnia and Herzegovina, began yesterday. But these charges have done little to damage the hero status he enjoys today among the majority of Serbs, writes Refik Hodzic. Unless this legacy is addressed in the communities of Srebrenica and the rest of Bosnia, the outcome of his trial may prove to be merely symbolic, if that. 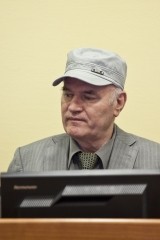 On May 12, 1992, Radovan Karadzic, president of the self-proclaimed Serbian Republic of Bosnia and Herzegovina, presented a document titled "Six Strategic Goals of Serbian People in Bosnia and Herzegovina" to the Bosnian Serb assembly. One of the goals, which included the division of Sarajevo to establish a corridor to Serbia, read: "Separation from other ethnic groups on the territory rightly claimed by Serbs, by force if necessary." In a country as ethnically mixed as Bosnia, the implementation of such a goal could mean only one thing—a bloodbath of unfathomable proportions.

While most deputies applauded Karadzic's vision in a moment of nationalist frenzy, they were nevertheless stunned by the words spoken by the newly appointed commander of the Bosnian Serb army. Ratko Mladic, a general who had commanded Yugoslav army troops in Croatia, bluntly confirmed with the assembly the implications of their strategic plan:

"Do you know what this means? Who will have to implement this goal but the army? Do you think you can just move people like that, as if they were a set of keys? What you are asking me to do, gentlemen, is called genocide."


An intercept of a radio communication with an artillery commander above Sarajevo recorded Mladic ordering civilian neighbourhoods to be continuously bombarded: "I don't want you to stop. Drive them insane; don't let them close an eye. Target Velesici [neighborhood], there aren't too many Serbs living there."

But the statement that will haunt the consciousness of Bosnians, Serbs, and the world for decades to come was recorded in the immediate aftermath of the fall of Srebrenica, a UN-protected enclave in eastern Bosnia. "On this day I give Srebrenica to the Serb people," he announced into a TV camera. "The time has finally come for revenge against Turks [Bosnian Muslims] who live in this area."

These chilling words were the prelude to a systematic execution of some 8,000 Bosnian Muslim men and boys who had sought refuge with the Dutch UN battalion or tried to reach safety through the woods surrounding Srebrenica. Years later, the International Criminal Tribunal for the Former Yugoslavia (ICTY) and the International Court of Justice would judge the massacre, directed by Mladic and carried out by his subordinates, to be the first act of genocide committed on European soil after World War II.


Finally, as it became clear the ICTY would not close without Mladic in the dock, the European Union and the United States pressured Serbia into action. The fearsome commander of the Bosnian Serb Army was arrested last year at a cousin's house in rural Serbia. Mladic, now an old and frail man, was picked up early in the morning as he ventured out to tend to his cousin's pigs.

Yesterday Mladic's trial finally opened.* He is a shadow of his former self, the arrogance and the intimidating piercing stare now replaced by complaints about the cold courtroom air and petulant quarrels with ICTY judges. However, the gruesome crimes with which Mladic is charged, his pig farmer's life on the run, or the absurd behaviour in the courtroom have done little to damage the almost mythical hero status he enjoys among the majority of Serbs. On the contrary, the years since he unleashed a tsunami of violence on non-Serbs in Bosnia and Herzegovina have seen his legacy cemented, not faded.

Even a cursory glance at the inter-ethnic discourse in Bosnia reveals how successful the "separation of the peoples" strategy was. On April 6, Sarajevo marked 20 years since the start of the longest siege in modern history; 11,541 red chairs lined the city's main streets, each representing a person killed during the siege. There were some 1,000 little chairs for the children who died. With Brahms' Requiem echoing off the Austro-Hungarian facades, the installation harrowingly captured the lives lost and the rivers of civilian blood that flowed on Sarajevo's streets as Mladic's artillery and snipers terrorised its inhabitants.

As Sarajevo grieved, Milorad Dodik, the current president of Republika Srpska, exclaimed in a televised statement: "There never was a siege of Sarajevo! What they are marking today in this provocation is the beginning of ethnic cleansing of Serbs from Sarajevo." Dodik's statement perfectly captured the extent to which "the separation of peoples" conceived by Karadzic and implemented by Mladic relies today on revisionism and a rejection of the need to reckon with the crimes committed during the 1990s.

Bosnia and Herzegovina is at a turning point. The nominal post-war economic recovery and its painfully slow progress towards NATO and EU accession lie in stark contrast to the rhetoric of division and mistrust championed by the likes of Milorad Dodik. He forcefully advocates for the dissolution of Bosnia; continues to deny the Srebrenica genocide and other crimes suffered by Muslims at the hands of Bosnian Serbs; and openly embraces convicted war criminals like Biljana Plavsic, Karadzic's wartime deputy, celebrating their contribution to Serb national interest and legitimising their actions during the war. At the same time, Dodik is accepted as a partner by the European Union and the rest of international community as a leader who will take Republika Srpska and Bosnia to a prosperous EU future.

The outcomes of this failure are clearly visible in the permanent fragility of the Bosnian state and the negligible impact ICTY trials have had on the reconciliation of Bosnia's Serb, Muslim, and Croat communities. While we can hope their contribution will come at some point in the future, when the society is ready for a full reckoning with the horrors of the 1990s, there are no clear signs that Bosnia is heading towards such a future.

On the contrary, the legacy of Ratko Mladic is alive and well, much stronger than it should be 17 years since the war ended and he was indicted. Those 17 years it took to bring him to justice have left deep, almost permanent scars, nowhere more visible than in Srebrenica, a town where Bosnian Muslims formed an overwhelming majority before the war. Today, after Ratko Mladic gifted it to Republika Srpska in 1995, it bears a haunting, apocalyptic air. The upcoming municipal elections revealed there are more Bosnian Muslims buried in the Potocari Memorial Center than are registered to vote. This year it is likely to elect the first Serb mayor in its recent history.

This speaks volumes about the reality in Bosnia today and how Ratko Mladic helped shape it. Unless his legacy is addressed in Srebrenica and the rest of Bosnia, the outcome of his trial in The Hague may prove to be merely symbolic, if that.

*The trial has since been delayed due to evidence errors.

Refik Hodzic is a journalist, filmmaker and justice activist from Bosnia and Herzegovina, and is currently working as director of communications at the International Center for Transitional Justice. This op-ed originally appeared in Al Jazeera.