Brazil's Hour of Truth and Justice 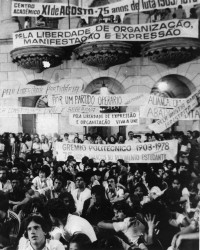 Brazil’s new government is showing strong support for the expeditious passage of a bill creating a National Truth Commission to investigate human rights violations committed during that country’s authoritarian past.

The zeal to establish a truth commission is, in no small part, a response to persistent victims’ demands for truth and justice in the last two decades. Over time, Brazil has gradually accepted responsibility for the crimes committed against opponents of the military dictatorship that ruled the country between 1964 and 1985. Two successive reparation programs have acknowledged victims of the dictatorship and granted them significant financial compensation.

Regrettably, Brazil’s support for truth-seeking and reparations is not yet matched by an equal commitment to ending impunity. The government has yet to act upon a December 2010 decision by the Inter-American Court of Human Rights voiding key provisions of Brazil’s 1979 Amnesty Law, which have prevented legal accountability for military agents accused of carrying out executions, disappearances and torture.

Focused as it is on fast-tracking the truth commission bill “as is,” the government has shown little interest in consulting victims groups and experts on the mandate and structure of the truth commission. The human rights community in Brazil which originally put out the call did not demand any commission of inquiry, but rather, a truth commission conforming to well-established international standards: politically independent, objective and effective.

The current bill has several positive elements; chief among them, the explicit recognition of a right to the truth. Victims of the most serious human rights violations have a right to know in the most complete way possible the circumstances surrounding the crimes perpetrated against them and their loved ones.

However, the duty to establish the truth about abuses cannot be considered complete without decisive measures to prosecute and punish the perpetrators. Brazil must therefore ensure that the National Truth Commission is not created in lieu of prosecuting torturers, but will contribute to justice. In particular, the current bill should not constrain the work of the future commission to those dispositions of the amnesty law of 1979, which have been effectively voided by the Inter-American Court of Human Rights.

The bill should also guarantee complete independence and impartiality for the members of the commission. As it stands today, the bill foresees that commissioners will serve by presidential decision, with civil society playing no role whatsoever in their nomination or appointment. Currently, the bill provides neither immunity for the potential commissioners nor protection against arbitrary dismissal. To the dismay of many victims’ groups, the commission may also include representatives of the armed forces, which could result in conflicts of interest for members of the commission. The government needs not to fear that parliamentary debate may derail the initiative; on the contrary, the correction of voids and ambiguities would strengthen and legitimate it.

Fortunately, public debate about the dictatorship’s abuses is growing in Brazil and the government has aligned itself against denial. Some may consider truth-seeking and justice efforts an unnecessary detour into an ugly past as the country becomes stronger politically and economically. However, it is unlikely that Brazil will genuinely consolidate its global leadership if it stands as the odd one out in a region where amnesties for atrocity have crumbled.

The National Truth Commission and the decision of the Inter-American Court are, above all, a golden opportunity for Brazil to consolidate the regional commitment to human rights, and to build a bond of trust with victims.

Eduardo González is director of ICTJ's Truth and Memory Program

Read an interview with Marlon Weichert, human rights lawyer and regional prosecutor for Brazil’s Federal Public Ministry, on this subject.