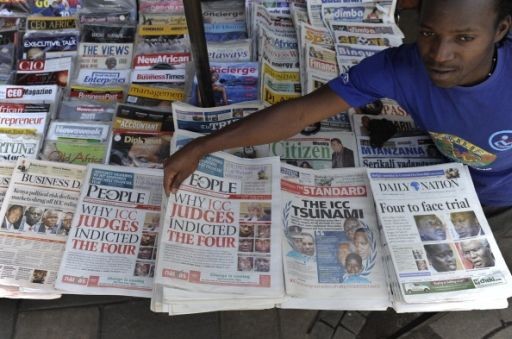 A newspaper vendor sells the day's papers carrying in the headlines photos of four Kenyans to face charges of crimes against humanity before the International Criminal Court, in the Kenyan capital Nairobi on January 24 2012. TONY KARUMBA/AFP/Getty Images

International Justice Day marks the anniversary of the adoption of the Rome Statute, which established the International Criminal Court (ICC) on July 17, 1998. This was a culmination of efforts made by the international community to establish a permanent mechanism to help seek and promote justice for the most egregious violations of human rights.

Following post-election violence in 2007–2008, Kenya faced a need to hold accountable those most responsible for the fighting that resulted in more than 1,000 deaths and widespread property destruction and displacement. But national judicial mechanisms proved reticent to do so, and in 2010, the situation was adopted by the ICC, who in January of 2012 announced indictments against four suspects.

But justice for victims cannot be achieved through prosecutions alone. Truth-seeking, institutional reform, reparations, and official acknowledgement of wrongdoing or responsibility must also be considered when establishing a holistic process to ensure similar violence does not occur again. This is a growing concern as Kenya approaches its first presidential election since the violence, to be held in March of 2013.

Complementarity envisages the ICC as a court of last resort, to act when domestic measures that are given primacy have failed. This needs to be borne in mind when considering criticisms faced by the ICC of selective prosecution in the case of Kenya.

The reality is that continued attempts to initiate domestic proceedings since the signing of the National Accord in 2008 failed outright. The political elite spurned three opportunities to set up a mechanism to address the post-election violence, clearly demonstrating a lack of willingness to pursue accountability. The ICC acted only when it became clear justice for victims was not going to be realized through national courts.

Members of the political elite who are subject to the ICC process continue to spread propaganda and misinformation about the system and have cast themselves as victims of an international conspiracy. Rigorous effort to divide the country along ethnic lines in response to their indictment is evidenced by numerous “prayer rallies” and the revival of ethnic prejudice through Gema and Kamatusa. This is a dangerous precedent designed to portray the ICC proceedings as an assault on ethnic blocs rather than a process through which to achieve justice for genuine victims.

Equally crucial is a policy framework to provide redress for victims through restoring livelihoods and acknowledging past atrocities. Furthermore, ongoing reforms to the judiciary and the efforts to vet and restructure the police force need to be strengthened and expedited to secure key institutional pillars of governance which should act to guard against future violence and systematic human rights abuse.

A comprehensive and holistic approach encompassing prosecutions, truth-seeking, reparations, and institutional reform ensures the appropriate recognition of both the experiences and the dignity of victims of serious human rights abuses. Consequentially, affirming victims as rights-bearing citizens also strengthens the relationship between citizens and the state, thus promoting and entrenching the rule of law.

The victims of the post-election violence continue to suffer in displaced persons camps, their livelihoods stripped away and their prospects for justice dwindling at the behest of political interests. To mark International Justice Day, Kenya must renew efforts to establish domestic accountability mechanism to complement the ICC process. Equally important are truth-seeking measures, reparations for victims, and institutional reforms to guarantee non-recurrence and create a path for transition to a more democratic and accountable society.