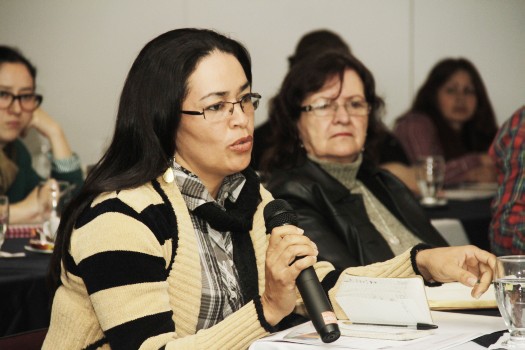 In times of transition, reparations can make a tangible impact on the everyday lives of victims. Symbolic reparations can act as a concrete recognition of the pain and suffering endured by an individual or a community, and material reparations can help provide for basic necessities that may have been lost in conflict, such as housing, health, and education.

It was this potential that was considered at a recent international seminar, "Transformative Reparation for Women Victims of Armed Conflict," held in Colombia, on November 16, 2012.

Representatives from several major national women's organizations in Colombia gathered in the nation’s capital of Bogotá, including victims groups from several regions as well as representatives of the government dealing with reparations policy. International guest speakers included Rosa Cobo, Director of the Master’s Program on Gender and Equality Policies at the Coruña University; Julie Guillerot, researcher in the Group on Reparations of the Peruvian Truth and Reconciliation Commission; Kelli Muddell, Director of ICTJ's Gender Justice program, and Cristián Correa, Senior Associate with ICTJ's Reparative Justice program.

How transformative can reparations be for women?

During or after massive human rights abuses occur, women are often forced to take sole responsibility of their families. For example, women are heads of households in more than 43% of all displaced families in Colombia.

If women are widowed, or become victims of rape or sexual abuse in times of conflict or repression, they can be ostracized in their communities or abandoned by their families. State-run reparations programs can provide essential economic support for these women to care for themselves and their families.

But reparations aren't effective if they don’t challenge legal or political discrimination against women. For example, if land is distributed as part of a reparations program in a context where women are not legally allowed to own land, women and their dependents are left behind.

With these challenges in mind, the seminar identified the need to promote reparations that reject further entrenchment of gender inequality. Participants considered how reparations could combat patterns of discrimination and subjugation that incite and sustain violence against women.

Below, Kelli Muddell, Director of ICTJ's Gender Justice program, delivers her remarks.Videos of the presentations can be found here.

Kelli Muddell of ICTJ recalled the Nairobi Declaration of 2007, which states "reparation must go above and beyond the causes and immediate consequences of the crimes and violations. They must address the political and structural inequalities that shape the lives of women and girls."

Rosa Cobo argued that violence against women has in part been a reaction to much of the social advancements made by women in recent decades. "We must identify processes and social relations that act as a breeding ground for patriarchal violence,” said Cobo.

With this in mind, reparations programs should be attentive to the needs of women from the start of the process until the final stages of a program. These programs should prioritize an efficient registration process for victims, one which find solutions to the varied hurdles to register women, such as illiteracy, fear of stigmatization, lack of a bank account, or insufficient legal rights to inheritance or property ownership.

However, how transformative can reparations actually be? Kelli Muddell emphasized that "reparations can open a way to enter in discussions about inequality, to help discourage discriminatory practices and raise awareness of the unique experiences of women in a conflict. However, you can't expect that reparations will lead to a complete transformation of patriarchy rooted in a particular culture or institution.”

Cristián Correa of ICTJ drew the distinction between reparations programs as a mechanism for transitional justice and broader struggles of social movements. "How much can we expect of a reparation program, and how much of the social struggle?” he asked. Reparations - according to Correa - must be effective, prompt, concrete, and a mechanism that helps the victim in a timely manner. With too many expectations, “a process for reparations may end in panel discussions and never reach its potential beneficiaries."