From March 27 to 30, some 20,000 Canadians gathered in Edmonton, Alberta, for the final national event of the Truth and Reconciliation Commission of Canada (TRC). Established in 2008, the TRC is now entering a new stage: the writing of its final report based on the more than 6,500 statements it has gathered. 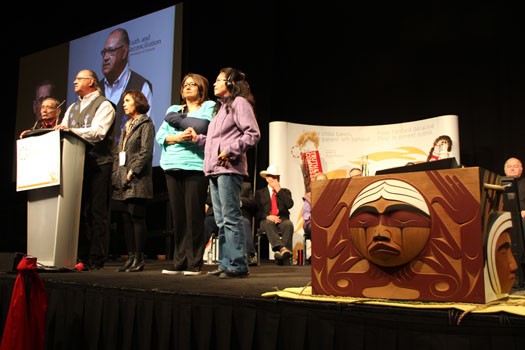 The Bentwood Box, an elaborately carved chest made by an indigenous artist from Vancouver Island out of red cedar, has presided over the stage at each of the seven national events of the Truth and Reconciliation Commission of Canada (TRC). For nearly four years, the Bentwood Box has been traveling around the country, receiving dozens of gifts to commemorate personal journeys of reconciliation, and the enduring countless stories about the legacy of the Indian Residential Schools. From March 27 to 30, the Bentwood Box took the stage for the last time in Edmonton, Alberta, where some 20,000 people gathered for the TRC’s last national event.

As part of the TRC’s tour around the country to collect testimonies and educate Canadian society about the legacy of the residential schools, it organized seven gatherings, known as national events, which since 2010 have taken place in different provinces of the country – Manitoba, the Northern Territories, Saskatchewan, Quebec, British Columbia, and Alberta. At the four-day event held in Edmonton, indigenous -First Nations, Inuit, and Métis- and non-indigenous Canadians were invited to be part of the reconciliation process by listening to statements of survivors and sharing circles, participating in workshops and performances, or viewing educational exhibitions and films.

For over 100 years, generations of indigenous children were forced to forget their language and their culture – or at least feel deeply ashamed of it.

The suicide rate for First Nations and Inuit young males is 126 per 100,000, compared to 24 per 100,000 for non-indigenous Canadian males. The survivors’ painful experiences directly impacted their families, even though their children and grandchildren might have never attended a residential school.

Several testimonies at the Edmonton national event reflected on the long-term consequences of the abuses. Kim Quinney began her testimony by saying, “I am an intergenerational survivor.” She went on to explain, “Residential schools have been over for many years but these intergenerational cycles are continuing.” As her family carried the scars of their experiences in residential schools, growing up Kim was subjected to emotional, physical, mental, and sexual abuse within her family. She became addicted to drugs and struggled to raise her daughter. When Kim decided to check herself into a treatment center for residential school survivors, her mother asked, “Kim, why are you going? You weren’t affected, you didn’t go to a residential school.”

In response, Kim explained, “When you walked away from the residential school your abusers were gone, but for me, I have to live with them.” Kim sat by her mother’s side as she gave her testimony at the first National event in Winnipeg, and now it was her mother who was showing Kim support at the last national event in Edmonton, when Kim decided to share her testimony.

As the TRC has carried out its work over these four years, more stories of the intergenerational legacy of the residential schools have emerged, making it clear that this painful past continues to have serious ripple effects in the present. “Having been at four of the seven national events, at this final event in Edmonton I noticed many more intergenerational survivors having the courage to come forward and tell their stories,” explained Virginie Ladisch, director of ICTJ’s Children and Youth program. “In contrast to previous investigations into this past, such as the Royal Commission on Aboriginal People, the public hearing forum provided by the TRC seems to have given space to those who perhaps either didn’t recognize the impacts or feel they did not have the space to express it.”

On the first day, known as Education Day, over 2,000 middle school and high school students from the region crowded the conference center in Edmonton. In activities especially designed for them – multimedia workshops, performances, and screenings – students got to learn and reflect about this dark period of Canada’s history. Many knew nothing or very little about residential schools before attending the national event.

“It’s important that everyone know that this happened in our country. We need to acknowledge them. We need to learn from the past and move on,” said Andrea Zapata, of J.H. Picard School, in Edmonton. Andrea felt “shocked” after recently learning about the residential schools in 10th grade, which she considers too late. Attending the national event was a “good experience,” she said. “I knew aboriginals were hurt by this but I did not know there was so much emotion. Yesterday I really felt their emotion,” she explained after Education Day.

Commissioner Marie Wilson highlighted that the Edmonton event has already inspired governments to begin taking corrective action: “The province of Alberta, expanding on the lead of two northern Territories, announced its commitment to develop new curriculum, mandatory for all students, that will reflect an honest history of residential schools and founding treaties between First Peoples and the Canadian state. Meanwhile, three cities in Alberta, plus the two largest cities in other parts of Canada, and all municipalities large and small throughout the neighboring province of British Columbia, have all declared a Year of Reconciliation.”

Despite the fact that Edmonton was the final national event, survivors and their families stressed that this is not the end of the process of reconciliation, but just the beginning. “This event is not going to end our pain,” residential school survivor Gina McIntyre underscored during her statement in front of TRC Chair Justice Murray Sinclair. “We need to keep talking about this. We need to keep telling our stories.”

Every single story of the residential schools survivors deserves its own book, and now the TRC commissioners are facing the great challenge of presenting the diversity of experiences and voices they heard in a way that will honor the survivors and help Canada understand what happened at the residential schools, why and how it happened, so that the country can avoid repeating such abuses in the future.

“It will take collaborative efforts from many partners to ensure that the overall story and findings of the final report are eventually made available in multiple formats, and in indigenous and other world languages,” Wilson said. “This will ensure that the younger generations and the wider world can benefit from the courage, resilience and wisdom of the Canadian residential school survivors who fought to have their voices and stories heard through a TRC. They will be known forever as the heroes of the TRC Final Report."

Echoing the testimonies presented at the TRC, the Bentwood Box will now find its home at the National Research Centre at the University of Manitoba, where all of the resources gathered by the TRC will be hosted and made available to the public.

ICTJ has assisted the Truth and Reconciliation Commission of Canada since it was established, especially through our Children and Youth program on how to engage youth in the Canadian truth-seeking process.

PHOTO: Truth and Reconciliation Commission of Canada's main stage during a ceremony called "Expressions of Reconciliation," during which Canadians offer their gifts to the Bentwood Box (right) as testimonies of reconciliation.(Marta Martínez/ICTJ)