Charting Decades of Violence in Lebanon

Despite the overwhelming number of Lebanon's civilians killed, injured, displaced or otherwise harmed by decades of violence, there remains a near-total lack of official acknowledgment, reparation, truth about serious crimes or accountability for the perpetrators. ICTJ is pleased to release the first in a series of publications that aim to bring the crimes of the past in Lebanon to light. 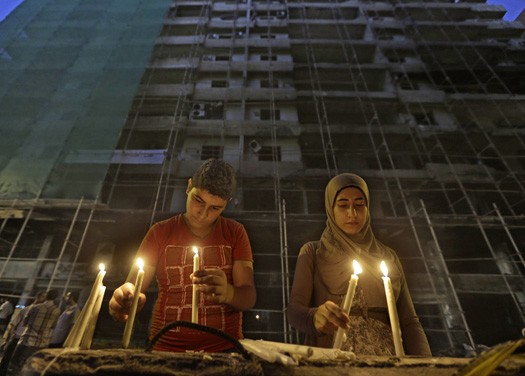 Photo: Lebanese Shiite citizens light candles in front of a damaged building, during a vigil at the site of a car bomb explosion, in an overwhelmingly Shiite area and stronghold of the Lebanese militant group Hezbollah, at the southern suburb of Beirut, Lebanon, Tuesday, Aug. 20, 2013. (AP Photo/Hussein Malla)

“I am sure the Lebanese deserve a better future. At least they deserve to find their own way, in accordance with a rich history that cannot be reduced merely to violence. Yes, we were a laboratory for violence, but we were also, before that, a laboratory for modernity, and in some ways we still are.” - Samir Kassir

Lebanon’s modern history is rife with conflict. Well before it gained independence in 1943, its people suffered class-based insurrections and inter-sectarian fighting that sometimes resulted in mass killings and forced displacement of entire communities.

Though the 15-year war formally ended in 1990, the people of Lebanon have continued to suffer from reemerging political violence, sporadic armed conflicts, and two foreign occupations.

Despite the overwhelming number of civilians killed, injured, displaced or otherwise harmed by decades of violence, there remains a near-total lack of official acknowledgment, reparation, truth about serious crimes or accountability for the perpetrators.

For the thousands of victims and their families, this deafening silence adds to suffering.

Today, ICTJ is pleased to release the first in a series of publications that aim to bring the crimes of the past in Lebanon to light.

Based on information collected from existing sources, the report identifies incidents of violence in a manner that may feed into a broader, long-term process of acknowledging what has happened to people in Lebanon, across the country and across social divides.

The aim is to contribute to the debate in Lebanon on how to break the cycle of political violence and serious violations of human rights, and bring about accountability, the rule of law, and sustainable peace in the country.

“Documentation of crimes in this report is not able to express the suffering of victims,” says Carmen Abou Jaoudé , head of ICTJ’s Lebanon office.

“However, we think compiling what exists is a preliminary but essential step toward a future, more complete process of truth seeking and reparation for those who continue to suffer incredible harm because of this violence.”

Denial of Lebanon’s past has left a gaping hole in the historical narrative being passed down to children and youth. As explained in the report,

“It is time to start questioning the logic of forget and forgive [...] Teenagers and young adults are asking questions about their country’s past and the suffering of their parents. They have no reference at school or at home that would enable them to begin to understand the legacy that they carry, which often forms part of their personal history and identity.”

The conclusion of the report makes several recommendations on how Lebanon can start to address the past:

"It is time to start exploring a process of acknowledgment. Whether it ends in forgiveness, in reconciliation, or in political stability remains to be seen. But the people in Lebanon, all of whom have suffered the direct or indirect consequences of violence, deserve that their suffering be acknowledged."

The report is available in both English and Arabic.

In an effort to revitalize dialogue about the past in Lebanon, ICTJ is producing a set of complementary publications as part of the project, “Addressing the Legacy of Conflict in a Divided Society.” In addition to the report Lebanon’s Legacy of Political Violence, the two-year project also includes a forthcoming study of the needs and expectations of people in Lebanon regarding dealing with the past and a report highlighting the impact of ongoing impunity in Lebanon. Together, these publications will aim to serve as resources that can support and inform debates about the past in Lebanon.