Since the 1950s, the FARC had been present in the southern department of Caquetá in Colombia. The local population suffered from decades of armed confrontations between the FARC and the Colombian Army. This is the story of the collective memory project implemented with the El Pato municipal farmers’ association (AMCOP) in the El Pato-Balsillas farmer reserve zone. 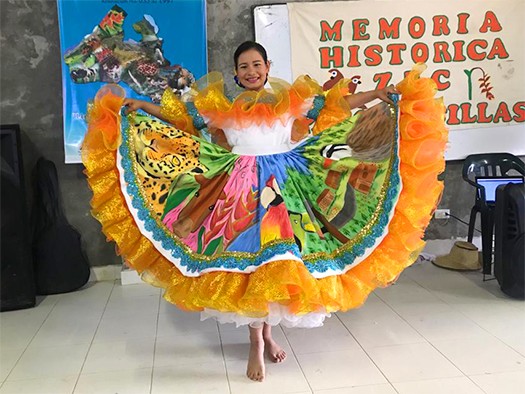 This story of change is the third in a five-part series exploring the role of transitional justice in achieving the Sustainable Development Goals (SDGs), particularly SDG 16 on peace, justice, and inclusion and related goals on gender and inequality. For more information on our work to advance SDG 16 and related goals, see the recommendations of the Working Group on Transitional Justice and SDG 16+.

Read the other stories in the series:

Since the 1950s, the FARC had been present in the southern department of Caquetá. The local population suffered from decades of armed confrontations between the FARC and the Colombian Army, aerial bombings, forced displacement, arbitrary detentions, forced disappearances, and recruitment of child soldiers by FARC. This is the story of the collective memory project implemented with the El Pato municipal farmers’ association (AMCOP) in the El Pato-Balsillas farmer reserve zone.

In 2016, AMCOP invited ICTJ to participate in training workshops they were conducting in nearby rural villages to help people understand the significance of the negotiations in Havana and the peace agreements. This experience laid the foundation for the collaboration with ICTJ to reconstruct the historic memory of the El Pato-Balsillas farmer reserve zone.

The village elders remembered the history well, but younger generations were only familiar with some the most well-known milestones of its history: the arrival of the FARC, the March of Death, and the March of Life. To encourage intergenerational dialogue, AMCOP brought together young professionals, sons and daughters of the farmers of the region, who had left to study but returned to work in the community.

During community meals, the villagers were invited to talk about how the village had been built, who had been the first to arrive, and tell stories about how they had survived the most difficult moments of the armed conflict. Using social cartography, the project team captured the stories, trajectories, and memories of the inhabitants and farmers, who saw their lives reflected in the resulting social maps. The team collected documents, photographs, and letters, preserved by the families for decades, as documentary support for the construction of five chronicles of key moments of the history of El Pato. These have been used to design a “Memory Backpack” for village school teachers that includes booklets with illustrations, a parcheesi board game, and a card game.

ICTJ supported the project team throughout the process, and the team and leaders of the El Pato-Balsillas reserve zone have reiterated that this collective construction of memory has strengthened their identity and increased their sense of belonging to these lands, and that it has given them tools to move forward and create their own future. The narratives contain vital information on the damages caused by the internal armed conflict, providing the farmer association with a solid basis for formulating their proposals for collective reparations and for the future development of a region that the state abandoned and stigmatized for so many decades.

PHOTO: A woman wearing the traditional regional dress performs at the local "Return Festival" in El Pato, Colombia. The dress is decorated with representations of local fauna. It is also depicted in the card game included in the "Memory Backpack." (ICTJ)