To Succeed, Constitutional Reforms Must Be Woven into the Social and Legal Fabric

Constitutional reforms can be valuable in a transitional justice process, but their effectiveness depends on the degree to which they are woven into the social and cultural understanding of the country's legal framework. 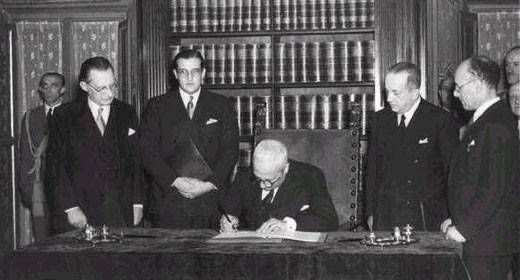 There is growing consensus among transitional justice experts and practitioners that truth seeking, trials, reparation, and reform cannot be applied uniformly: context must dictate the tools we use and how we use them.

Until recently, institutional reform pursued in a transitional justice context was limited to those efforts aimed at preventing the state from repeating violations of individual fundamental rights. The discussion has since expanded to consider other type of reforms that should also be part of transitional justice, such as those linked to the constitutional development of the state.

While the objectives of criminal justice, truth commissions, and reparations are generally clear and well established, those relating to institutional reforms are currently still debated.

Had we asked at the end of World War II whether constitutional development should be part of a societal response to the abuses of the conflict, the answer would have been yes. Reduced to ashes, Europe required rebuilding, which could be achieved only by addressing its recent past. Millions of people, as victims of brutal totalitarian regimes, had a right to reparation. It was imperative that the horrific past not recur. “Never again” became the motto of new political actors, but the principle was applied rather differently from how transitional justice doctrine today suggests we deal with the collapse of authoritarian regimes or the end of an armed conflict.

The main concern at the time was to establish democratic government, with limited attention paid to any other accountability measure. There were no truth commissions, only partial reparations programs for victims or none at all. Meanwhile, there were only a limited number of expedited trials of perpetrators—the most widely known being those of the Nazi leadership in Nuremberg and the proceedings against Adolf Eichmann in Jerusalem, magnificently recounted by Hannah Arendt. However, in spite of limited accountability and reparations efforts, states did initiate several long-term institutional reform processes, including the drafting of new constitutions, not just vetting or lustration, in the aftermath of the war.

These new constitutions and the doctrine of “constitutionalism” together represented the core of the transitional process in that particular historical moment.

Italy offers a clear example. Its constitution was drafted by the social forces that had been excluded by the fascist regime, and its final provision expressly prohibits the reorganization of the disbanded fascist party, notwithstanding the promulgation of an amnesty ministerial decree that allowed former party members to retain their position in the public service.

Further, fundamental principles articulated in the new constitution included: respect for minorities (article 6); religious pluralism (article 8); the independence and autonomy of the judiciary (articles 101 and 104); and the power of the constitutional court to ensure the compliance of legislation with constitutional precepts (article 134).

These are all issues that, to this day, still generate conflict in countries less democratically developed. More importantly, these provisions have been applied and implemented thanks to the unrelenting efforts of political and legal actors, as well as civil society, in a long and uneven process in which, fortunately, interpretation inspired by a democratic constitution prevailed.

Although constitutional reforms are not explicitly part of today’s classic transitional justice paradigm, we have several examples of country experiences demonstrating how crucial the role of constitutionalism is in dealing with the past. Gábor Halmai explains it well in his new paper, “The Role of Constitutionalism in Central Europe’s Transitional Justice Processes,” published by the International Center for Transitional Justice. He presents two cases, Hungary and former Eastern Germany, which differ in terms of their historical context and legal traditions.

Through analysis of their respective legal frameworks it becomes clear that without a profound constitutional culture, the classic mechanisms of transitional justice are likely to fail. Indeed, these mechanisms should be included in a larger constitutional project that entails not only the promulgation of formal legislation (a new constitution or constitutional reform) containing the provisions required to accomplish the transition, but also the development of constitutionalism as a political project.

In the first lines of the paper, he explains that the success of the transitional process in Eastern Germany was partly ensured by its annexation to a consolidated democratic state. Hungary, in contrast, paid the price of a limited cultural change. It shows that only the political will to deal with an undemocratic past can result in the consolidation of democracy.

Halmai also clarifies that the success of a transition and constitutional process greatly depends on the type of transition. On the one hand, in the “rupture-type” democratic transitions of Eastern Germany and the former Czechoslovakia, new state institutions (legislators and constitutional courts) provided an interpretation of material justice. They applied the constitutional principles in full respect of the true meaning of constitutionalism—namely, respect for democratic values, inclusiveness, and citizens’ participation in the political process.

Yet in the “negotiated transitions” of Hungary and Poland, the formalist approach was preferred, in which codified constitutional reforms were interpreted based on the rule of law but were neutral toward the abuses of the past.

What is the lesson to be learned? Including constitutional reform in a transitional justice process certainly constitutes an added value, but it requires a certain degree of caution. These reforms should not be considered complete by the mere promulgation of a new constitution or specific reforming legislation. The transition process should continue until the new provisions become an integral part of the social and cultural understanding of the country’s legal framework. Otherwise, as Halmai rightly asserts, constitutions are reduced to “an elite instrument, especially in countries with a weak civil society and a weak party political system.”

Photo: The provisional head of state, Enrico De Nicola, signing the Constitution by virtue of Provision XVIII, on 27 December 1947.