Context of the Case of Hebert Veloza Garcia 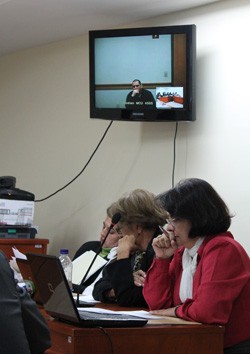 The analysis and the definition of the context in which the criminal group acted is a fundamental and strategic step in the prosecution of system crimes. The context clarifies and explains the conditions that facilitated the emergence, creation, and consolidation of the armed group and the operation of the macro-criminal structure.

The Justice and Peace Chamber ruling in the hearing to verify the legality of the charges against Hebert Veloza Garcia contained information on the context in which these occurred. According to the Tribunal, it thus seeks to “contribute elements that underpin the analysis of the modus operandi, the patterns, if any, and the dynamics in which the criminal structure under the command of Hebert Veloza Garcia, alias “H.H.” was organized, as well as to “establish the judicial truth with respect to the criminal actions of the paramilitary groups in different regions of the country.”

In the 90-page text, the Chamber identifies four characteristics that it considers important for explaining the dynamics of the violence in the Uraba region: a history of complex and unrestricted settlement and colonization; the strategic importance of the region, which was used by illegal groups to their advantage; the historical presence of the EPL and the FARC in the area; and the failed demobilization of the EPL in the negotiations that took place in the early 90s, leading to the creation of the “Popular Commandos.”

Also, the Chamber includes an analysis of some of the social conflicts present in the history of Uraba, and associates them to the context in which the crimes attributable to Hebert Veloza took place. Among others, the Tribunal points to the labor conflict, the conflict over lands, the political conflict, and the conflict between the FARC-EP and the EPL.