Understanding education as a form of both reconstruction and reparations is essential for societies in their efforts to address victims’ rights and help victims and their families overcome the consequences of a painful past. 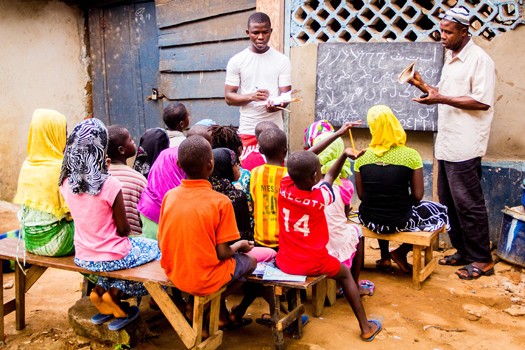 Understanding education as a form of both reconstruction and reparations is essential for societies in their efforts to address victims’ rights and help victims and their families overcome the consequences of a painful past.

Education as a form of reparation for families that suffered human rights violations can mean many things, whether offered as one benefit or as part of a set of transitional justice measures. Scholarships for families of those who suffered human rights violations are often one form of reparation. In some cases, reparations programs have included the construction or reconstruction of schools and education facilities.

In both cases, naming a scholarship or a building after a victim or in relation an event in their lives or history can also be symbolic and meaningful reparation. In many post-conflict countries, helping victims overcome the consequences of human rights violations, war crimes and crimes against humanity can mean doing both reconstruction and reparations in relation to education. While reconstruction and reparations are distinct efforts, there are also different ways to make them complementary and mutually reinforcing.

For example, implementing reparations programs that offer scholarships for survivors or for the families of victims might require a certain level of reconstruction of schools and infrastructure to succeed. At the same time, the reconstruction of schools, community centers and the like would be meaningless for many victims without programs that provide assistance for school fees for children who lost a parent or guardian, so they can benefit from them as well.

At the heart of these efforts is the attempt to respond to the educational needs and rights of the entire population entitled to access schools while addressing the needs of specific survivors and family members who might face additional and often ongoing obstacles to accessing education.

Since the 1990s, countries emerging from periods of authoritarianism or armed conflict have increasingly taken steps to recognize the harms caused by massive human rights violations — and the sociopolitical conditions that gave rise to them in the first place. Many large-scale violations form part of a legacy of “historical injustice,” which for decades and even centuries left some groups without basic rights and protections, and privileged certain groups over others.

In most countries, inequality is not the result of chance or geography, but of the priorities set by colonizing or governing elites. If a group has been denied social, economic, and cultural rights for generations, it is not surprising that during an armed conflict or dictatorship its members would face additional hardship in accessing basic services like education.

Such marginalization is observable in middle-income countries, like Peru, where indigenous communities living in the Andean Highlands and the Amazon Basin have lower access to health care and education and are often subjected to discrimination or racism. Similar conditions can be seen in Sierra Leone, where people from the inlands, which was called “the protectorate,” still enjoy lower living standards than those living in the coastal areas originally settled by freed slaves (or “the colony”).

As a transitioning society seeks to change and make basic rights universal and access to social goods more equitable, new policies are needed that can overcome high degrees of past marginalization. Here, perhaps the most serious challenge lies in creating policies that can deal with inequality’s deep roots.

Recognizing historical injustices — and their manifestations — requires a focused, longer-term examination of the root causes of past violations and persistent inequality, in order to develop strategies to help victims overcome them. This will often include an educational element. Indeed, addressing historical forms of marginalization through reconstruction and education is not only an important condition for complying with states’ obligations under the International Covenant on Social, Economic and Cultural Rights, it is essential for ensuring a society’s future stability.

This is an area where transitional justice can make an important contribution — even if a modest one — by validating and highlighting victims’ experiences and rallying behind the implementation of rights-based development policies.

Some truth commissions have played an important role in pointing out these imperatives. However, the limitations are that often a commission’s recommendations for addressing historical marginalization, or more specifically marginalization in education, are only partially followed. Inevitably, to succeed these efforts must become part of a long-term political agenda.

Experiences in Peru and South Africa suggest that progress on education is possible when those involved in the struggle for peace and democracy remain engaged and committed to overcoming social injustices. In both countries, efforts targeted enrollment of members of marginalized communities and, in the case of indigenous students in Peru, bilingual education. But even these results have been limited, as other pressing issues have tended to overtake the political agenda and the initial commitment to democratization and justice has waned.

Emphasis on the security side of peacebuilding — which does not usually address the deep inequalities that underlay the conflict — can make it difficult to prioritize improving the availability and quality of education. This was the case in Sierra Leone, despite the recommendations made by its truth commission for improving access to education.

Legally, victims of serious human rights violations have a right to reparations from the state and from perpetrators for the harms they suffered. The right to reparation is distinct from social and economic rights, which includes, for instance, access to health care and education. But just as economic and social rights can be fulfilled through ‘progressive realization,’ fulfilling the right to reparation must take into account the capacity and resources of a state. Thus, providing reparations need not always have to compete with fulfilling social and economic rights; governments, especially in developing countries, and victims’ groups can agree on designing reparations programs that can collectively or individually meet the needs of victims while contributing to the fulfillment of their social and economic rights. These types of measures address the different consequences that most victims, in general categories, still suffer, which often include persistent psychosocial, physical, and/or socioeconomic effects — which can even be passed down to the next generations.

Most reparations policies involve educational programs in some form.

The main difference is that education as a form of reparation involves an acknowledgment of wrongdoing and responsibility on the part of the state for past violations, crimes, and failures to protect victims. In this context, educational programs as reparations can be a response to the past, targeted at the specific needs and aspirations of the victims themselves.

The children of victims usually have had their studies cut short; and they are more likely to be affected by poverty and other consequences of the violations suffered by their parents. For some survivors the inability to provide for their children’s education — which includes being able to pay fees and purchase school books and uniforms — is what causes them the most pain.

Measures could include advance study programs that can help youth receive degrees equivalent to the primary, secondary, or other levels they could not complete due to violations. (A good example is Sierra Leone’s Complementary Rapid Education for Primary Schools.) Another is adult literacy programs or technical or professional training for people who are no longer of schooling age, which is being done in Peru.

Changes in the school curricula as well as the teaching of history, especially of marginalized people or of periods or events denied by previous regimes, are also relevant to discussions of education as a form of reparation.

At the same time, reparations policies that focus on education should not be limited to the most marginal among youth, especially where groups targeted for abuses did not come from the poorest sectors. For example, programs offering university scholarships to victims, or their children, should be made available to all victims with the academic capacity to attend university, and not just a few, as in Peru and Colombia, where victims must compete for scholarships.

Even if this is achieved, for many countries the challenge of guaranteeing a quality and accessible education for all will persist. That might not be part of a transitional justice agenda, but it is certainly an important priority for anchoring peace and democracy in the long term.