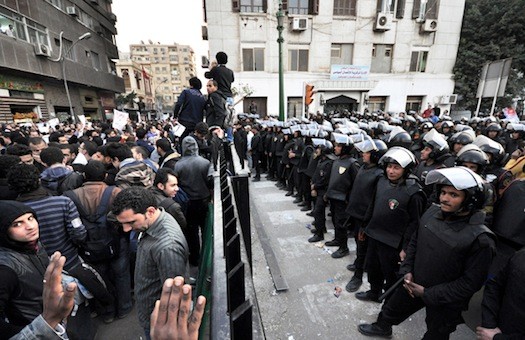 London, August 30, 2014 – Independent organizations in Egypt face a looming crackdown, 44 international and national human rights groups from across the global said today in a joint statement.

The Egyptian Social Solidarity Ministry placed an advertisement in leading state newspaper Al-Ahram on July 18, 2014, giving all Egyptian and international non-governmental organizations until September 2 to register under Law 84/2002, a restrictive measure passed during the Mubarak rule. This law empowers the government to shut down any group virtually at will, freeze its assets, confiscate its property, reject nominees to its governing board, block its funding, or deny requests to affiliate with international organizations. The law also does not indicate that NGOs have the right to appeal the decision.

“The al-Sisi government’s demand for all organizations to register under the discredited 2002 law is nothing but an order for them to surrender their independence,” said Sarah Leah Whitson, Middle East and North Africa director at Human Rights Watch. “There’s no way that an organization can register under Law 84 and still be considered ‘independent’ from the government.”

The law provides for criminal penalties up to one year in prison for unauthorized activities by independent groups. Under the government of Hosni Mubarak, the authorities routinely harassed activists and arbitrarily shut down independent groups.

"Egyptian authorities are using the law to orchestrate a witch hunt against NGOs and put them under their thumb. The government must withdraw the requirement for compulsory registration of NGOs under the current law, which is contrary to international human rights standards," said Hassiba Hadj Sahraoui, Deputy Director of the Middle East and North Africa Program at Amnesty International.

Egyptian organizations have been seeking to abolish Law 84/2002 since it was enacted, and the various governments since then have proposed several new draft laws concerning independent groups, but none have become law. Some organizations have opted to register as law firms or nonprofit companies instead of as associations under this law.

“We cannot see any justification for resurrecting Mubarak era legislation imposing re-registration process that could effectively close down or criminalize human rights organizations critical of the government,” said Gerald Staberock, secretary-general of the World Organization Against Torture (OMCT). “What is needed to overcome the present crisis is respect for human rights, not closing NGOs down.”

Egyptian non-governmental organizations have repeatedly said they do not object to—indeed, they encourage— a new associations law that will provide for independent oversight and transparency in funding and operations. They have submitted numerous proposals, including an alternative draft law that they say complies with international standards and best practices.

They negotiated with the Social Solidarity Ministry for more than six months to draft a new law, upon invitation from the former Minister of Social Solidarity, Ahmed al-Borai. Al-Borai submitted a consensus draft to the Cabinet in February for introduction to the new parliament, once elected. But the government has ignored this draft and all prior proposals.

Instead, it has disclosed a new draft associations law that permits authorities to shut down any of the over 40,000 Egyptian independent groups, pending a court order, or refuse to license new groups on vague grounds of harming “national unity.” The draft law would create a Coordinating Committee made up of government officials, including representatives of the Ministry of Interior and the General Intelligence Services, who would have control over anything to do with the registration, activities and funding of foreign NGOs in Egypt, as well as over any foreign funding received by Egyptian NGOs. The law also imposes harsher penalties than the current law of 84/2002, including prison sentences of up to three years and fines not less than USD $14,000 for activities that includes operating without a license, raising funds without permission or operating in association with an international group without permission from the government committee.

“There needs to be an overhaul of the whole legal framework to allow civil society to operate independently from the government, which is the purpose of civil society,” said David Tolbert, president of the International Center for Transitional Justice. “Enforcing the existing Mubarak era law or enacting an even more repressive draft law will shut down what remains of independent public civil society in Egypt.”

Pending the passage of this new more restrictive law, the government has declared that it will enforce the existing repressive law, and demanded that even groups now lawfully registered as law firms or nonprofit companies register as associations under the 84/2002 law. Independent Egyptian human rights organizations that have documented human rights abuse under the Mubarak, the Supreme Council of the Armed Forces, Morsy, and al-Sisi governments, have told international partners that they will be shut down entirely rather than register under the prohibitive 84/2002 law.

“The existing law and the draft bill rob independent NGOs of all meaning and deny Egypt creative energies by effectively shutting down the few remaining legitimate channels for public action,” said Karim Lahidji, president of the International Federation for Human Rights (FIDH). “Even during Mubarak’s three decades of stagnation and stifled public space, the government never went as far as this crackdown threatens to go.”

The 2002 law and the provisions of the new draft bill are entirely at odds with the international pledges Egypt made and the recommendations it accepted in its first Universal Periodic Review (UPR) at the UN Human Rights Council in 2010. The government at that time had pledged to revise the 2002 law to minimize governmental intervention and give organizations greater autonomy.

It accepted recommendations to guarantee freedom of association and to put in place simple, rapid, non-discriminatory procedures for establishing organizations, and to end administrative arbitrary discretion in establishing and controlling groups, and instead to bring Egypt’s associations law into compliance with international human rights standards. Egypt’s next UPR is to be in October.

Over the last 12 years, a number of treaty bodies have criticized the restrictions on NGOs in Egypt under the current legislation.

“We today face the very real prospect that in a matter of days authorities will effectively shut down what remains of independent civil society in Egypt, long one of the most vibrant in the Arab region,” said Michel Tubiana, president of the Euro-Mediterranean Human Rights Network. “This should not only ring alarm bells in Egypt, but among all those concerned about the future of civil society and human rights throughout the world.”