ICTJ to Take Part in Eighth Al Jazeera Forum: “Change in the Arab World: Where To?” 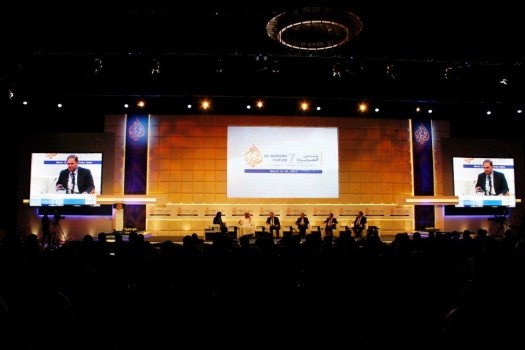 ICTJ President David Tolbert will be a featured speaker at this year’s Al Jazeera Forum in Doha, Qatar.

Al Jazeera Forum is the flagship event of Al Jazeera Media Network, at which Al Jazeera showcases its contribution to the world of media and politics. The forum has been running for eight years and has quickly grown from a local activity gathering dozens of guest speakers to an international event bringing together hundreds of participants.

The Forum, to be held from May 26-28, 2014, aims to explore how the Middle East and North Africa have changed in the aftermath of the “Arab Spring” revolutions, and will provide a platform for political leaders, intellectuals, analysts, journalists, activists, and media experts to the dynamics of transition in the MENA region.

Three years after the swell of revolutions, countries such as Tunisia and Yemen face formidable obstacles in their many paths to surviving the transitional phase and moving forward to build stable, free, democratic and just political systems. As transitional justice continues to take center-stage in regional debate, these experts and practitioners will assess challenges as well as progress made towards addressing the past.

On May 27, David Tolbert will deliver a keynote address on the obstacles of transition in the Arab world. His remarks will follow a keynote speech of Dr. Ahmad Tomah, the Interim Prime Minister of Syria.

As a part of the Forum, Mr. Tolbert will also be a featured speaker at a two-day workshop, titled “Paving the paths for Social Change: The Role of Media and Human Rights in Crisis.” The workshop focuses on the impact that media, human rights, transitional justice, and the rule of law have on the social changes in countries that have experienced humanitarian crises because of armed conflict, internal unrest, or natural disasters.

This is the second year ICTJ has been invited to participate at the Al Jazeera Forum. Watch the 7th Al Jazeera forum here.