The International Center for Transitional Justice welcomes the recent agreement between the Government of Colombia and the Revolutionary Armed Forces of Colombia to create a special criminal jurisdiction as part of an integrated system of truth, justice, reparations and guarantees of non-recurrence. 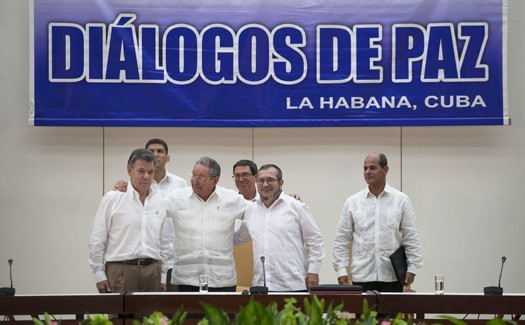 September 25, 2015, Bogotá — The International Center for Transitional Justice (ICTJ) welcomes the recent agreement between the Government of Colombia and the Revolutionary Armed Forces of Colombia (FARC) to create a special criminal jurisdiction as part of an integrated system of truth, justice, reparations and guarantees of non-recurrence. The agreement represents a crucial step in the process to end the 50-year-long armed conflict in Colombia, which has claimed over 200,000 lives and displaced millions.

The special judicial system described in the agreement, the details of which are not yet public, aims to address judicial accountability for serious crimes committed during the conflict, with a special emphasis on acknowledgement of wrongdoing and uncovering the truth.

“We are witnessing the critical role that transitional justice can play in creating lasting peace at a time when security concerns and flawed political compromises are fueling the resurgence of impunity,” said David Tolbert, President of ICTJ. “ICTJ will continue its work to assist Colombia to implement this agreement and other transitional justice policies in ways that guarantee victims' rights and contribute to building a just society.”

The effectiveness of the system will depend on the timely criminal prosecution of those, on all sides of the conflict, who do not accept responsibility for abuses or who do not provide truthful testimony.

“As with other judicial accountability models, the relevance and effectiveness of this model will not be measured by its design alone, but by the results it achieves for victims and society,” said Maria Camila Moreno, ICTJ’s Head of Office in Colombia. “Lessons learned from international and national experiences with comparable systems show that two factors contribute to their success, reduced complexity and sufficient resources.”

The judicial system envisioned in the agreement includes a special tribunal and an amnesty provision for “political and associated crimes.” In keeping with international legal standards, genocide, war crimes, and crimes against humanity are not eligible for amnesty. This is a positive development, and ICTJ stresses the importance of the future law that will define the scope of the amnesty and the criteria for defining associated crimes.

It is important to emphasize that the legitimacy of the proposed judicial system does not depend on the precise criminal penalties that are imposed, but on the judicial process being carried out in an open, timely, and transparent way, to the satisfaction of victims and society.

Given the large number of human rights violations that have been committed in Colombia during the conflict, ICTJ recommends that the model include clear strategies for prioritizing cases, in order to avoid the potential collapse of the system. The rigorous design and implementation of procedures will be essential to guaranteeing the model’s effectiveness.

“Much more remains to be done to see truth and justice truly take root in Colombia, and we will be there to help to do the hard work ahead,” added Moreno.