Banjul, June 12, 2019—“Never Again!” sings Awa Bling in her recently released song produced with the support of ICTJ. She is part of a movement of youth and prominent artists who are reclaiming this universal slogan by creating their own songs about transitional justice and bringing their voices to some of the most forgotten regions of The Gambia. Local and international fans can now access new music videos released on social media by five talented Gambian hip hop artists. 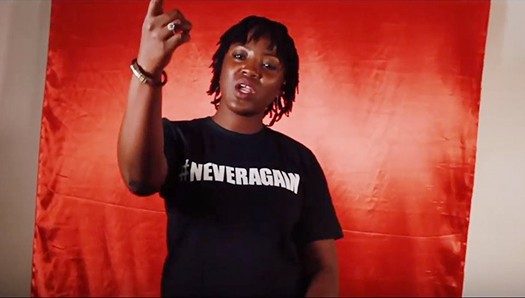 Banjul, June 12, 2019—“Never Again!” sings Awa Bling in her recently released song produced with the support of ICTJ. She is part of a movement of youth and prominent artists who are reclaiming this universal slogan by creating their own songs about transitional justice and bringing their voices to some of the most forgotten regions of The Gambia. Local and international fans can now access new music videos released on social media by five talented Gambian hip hop artists.

The artists are members of the Our Nation Our Voice collective, an energetic, independent, anti-oppression social movement that seeks to repair trust between The Gambia’s citizens and its government and obtain justice for victims of violence and repression during the 21-year dictatorship of Yahya Jammeh.

Leading hip hop activist “Killa Ace,” rapper-singer “Awa Bling,” Fulu artist “Bobo Dimo,” poet and youth leader Lala Tourey, and Bright Stars Entertainment Gambia each produced songs about the unfolding process of truth, reconciliation, and reparation in their country. They then took to the road for an 11-day national tour to some of the hardest to reach communities of The Gambia with their message of reform. The youth caravan also welcomed student activists and youth representatives of the Truth, Reconciliation, and Reparations Commission (TRRC) and employed innovative methods, such as playing football to help reconcile local communities, theater, radio appearances and rap battles by the artists. The tour was organized by ICTJ and endorsed by the TRRC, which opened its doors in 2018.

In a society where the ideas of transitional justice are too often presented as legalistic or only for the highly educated, and where glaring inequalities remain, music offers a way to democratize The Gambia’s transitional justice process and make it available to a wider audience.

“Through music and performance, these artist-activists have reshaped The Gambia’s transitional justice experiment into a wide-reaching and citizen-driven national process. They have energized and encouraged youth and communities from across the country to be active in this transition,” said Virginie Ladisch, a Senior Expert at ICTJ and Head of the Youth and Children Program.

“All too often, youth are excluded from formal justice processes, which is a serious mistake. As this campaign has shown, youth are a powerful and vital social force for change,” she added.

During the tour, transitional justice in The Gambia was transformed into a citizen-led movement.  Hundreds of people—including children, youth, the elderly, and women survivors of sexual gender based violence—joined the caravan, enjoyed the songs and shared their vision of the new Gambia. They participated in a dialogue about the legacies of dictatorship and economic exclusion in their country, and the need for institutional reform. The music and cultural performances shared at tour venues made these topics meaningful, personal, and accessible for all. The impassioned performances and reflections of tour participants were recorded in a short documentary film.

The caravan was just one component of ICTJ’s robust strategy to work with the TRRC, civil society, and other key actors to realize the relevance of youth’s participation in transitional justice processes. “This work with Our Nation Our Voice has enabled youth leaders to demonstrate their interest and capacity to contribute to social and political change. They have the dynamism and creativity to sensitize their peers and other constituents of Gambian society on issues of institutional reform and justice. The transitional justice process definitely needs their active participation,” said Didier Gbery, Head of Programme in The Gambia.

The diversity of the music and cultural presentations made the caravan unique as artists performed in three major Gambian languages as well as in English.

“The enthusiasm of communities to host the youth caravan and have conversations about their civic rights and responsibilities was incredibly powerful,” said Catherine Jassey, ICTJ’s program assistant in The Gambia. “The youth in communities where the caravan traveled are still asking when we will come back, and the youth are now planning a second tour,” she said.