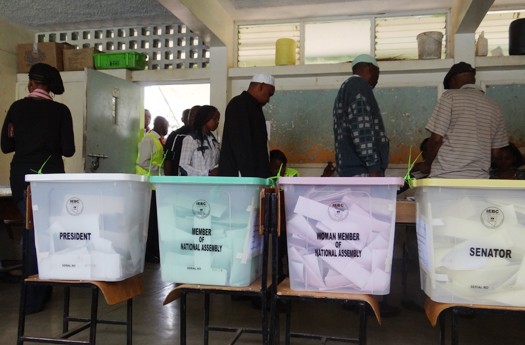 NAIROBI, May 20, 2014 – One year after its release, the International Center for Transitional Justice presents a critical overview of the Final Report of Kenya’s Truth, Justice and Reconciliation Commission in a new study released today. The ICTJ study argues that, despite the controversies that surrounded the commission during its tenure, the Final Report should be read and treated with seriousness by those who support human rights and the rule of law in Kenya.

The TJRC handed over its Final Report to President Uhuru Kenyatta on May 21, 2013, after four years of work. The text documents extensive human rights violations and other injustices committed in Kenya during the British colonial period (1895-1963) and under the administrations of Presidents Jomo Kenyatta, Daniel Arap Moi, and Mwai Kibaki – including during the 2007-2008 Post-election Violence.

“The Final Report is an official record of the state’s complicity in serial human rights abuses,” says Christopher Gitari Ndungú, head of ICTJ’s Kenya office and author of the study. “It shows Kenya as a state whose institutions are frequently exposed as corrupt and in callous disregard of the fundamental human rights of citizens.”

The Final Report now faces several serious challenges, including the government’s reluctance to publish it widely and several court cases disputing its contents. Some of the cases seek orders from the High Court to expunge aspects of the report or block the implementation of some recommendations.

According to the ICTJ study, titled Lessons to Be Learned: An Analysis of the Final Report of Kenya’s Truth, Justice and Reconciliation Commission, it is not surprising that powerful actors in Kenya would want to tamper with the report, or have it rejected entirely, because of the potentially incriminatory information it contains.

For example, the TJRC Final Report gives the names of several army commanders who are alleged to be the most responsible for violations during the Shifta War, which affected communities in Northern Kenya in the 1960s. It also appends the names of persons adversely mentioned in the report, and recommends that alleged crimes be further investigated and, where warranted, prosecuted.

The ICTJ study notes that the TJRC did well to provide a clear vision of reparations for victims, such as compensation and access to education and specialized health care, and related state obligations. To fund the plan, Kenyan authorities will need to assess the capabilities of the Kenyan state and possible international commitments.

The ICTJ paper also criticizes the Final Report on several fronts. For instance, it observes that the TJRC came up short on its conclusions and recommendations on the issue of ethnicity and inter-ethnic conflict. Yet, ethnic tensions were identified as a cause of some of the worst violence experienced in the country, including during the bloodshed that followed the 2007 elections.

Concludes Gitari Ndungú, “The TJRC Report is in some ways a fair reflection of the mandate and the commission itself. It has many imperfections but also many merits. Its recommendations, if heeded, could help to create a stronger Kenya, with rule of law and respect for citizens’ rights."