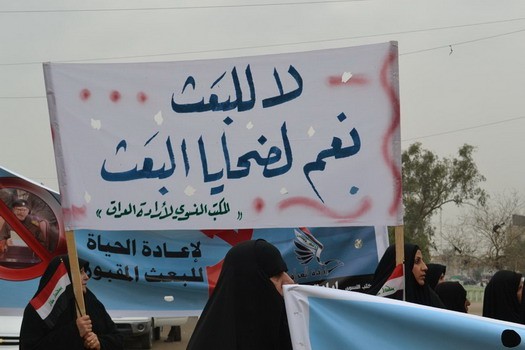 The report, titled “A Bitter Legacy: Lessons of De-Baathification in Iraq,” carries valuable lessons for countries in the Middle East and North Africa (MENA) as they consider how to deal with legacies of abuse by the security and political apparatuses of former regimes.

Based on significant field research and interviews with the Higher National De-Ba’athification Commission, the report focuses on Iraq’s purge of Baath Party members, which is the most well-known example of large-scale and politically based dismissals in MENA.

According to the report, from its inception in 2003, de-Baathification was a deeply flawed process that polarized Iraqi politics. Its ‘presumption of guilt’ approach deprived the state of much-needed expertise in the political, judicial, educational, military, and other spheres, contributing to severe instability in the country — not just in the first flush of regime change, but extending out to the 2010 parliamentary elections.

“After nine years of controversy, the de-Baathification story has not yet finished in Iraq. We are likely to witness new chapters unfold,” said ICTJ Program Director Claudio Cordone. “Iraqis themselves can learn lessons from this experience as they consider how to move forward. Beyond its borders, we hope that Iraq’s experience will enable other countries in MENA to make wiser choices.”

The report comes at a time when many policymakers and civil society groups in the MENA region are calling for the dismissal of members of the past regime.

The Egyptian courts have disbanded the National Democratic Party. Tunisia has not only dissolved the Constitutional Democratic Rally Party, but is also considering drastic legislation that would exclude from public life those associated with the previous government. And in any post-Assad Syria, dealing with the regime’s security apparatuses will be a key issue.

The report says, designing a proper vetting program, and not a purge, is essential for moving forward after decades of abuses, but there needs to be clear and realistic objectives. Individuals must be assessed based on their conduct, not their former party membership. They should also have the full opportunity to answer allegations against them.

Iraq's Ministry of Education was by far the most affected by Iraqi de-Baathification measures, with 16,149 staff dismissals by June 2004. The impact on Iraqi schools and educational administration was so severe that the new, US-led Coalition Provisional Authority ordered many employees reinstated.

“Iraqi officials purged the nation of the Baath Party through a sweeping, unfair process that contributed to destabilizing the country, with many lasting impacts,” said ICTJ President David Tolbert. “As Tunisia, Libya, Syria, and other countries look at how to reform their own political and security structures, they must develop an approach to transitional justice that doesn’t cripple the country’s infrastructure when it’s needed the most.”