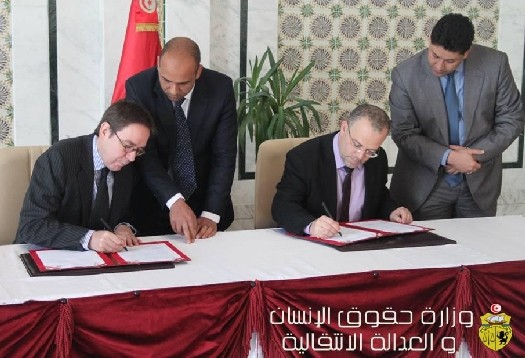 The International Center for Transitional Justice (ICTJ) signed a cooperation agreement with the Tunisian government on January 16 to provide further technical assistance in establishing transitional justice mechanisms in the country.

The development comes two years after protests forced President Zine El Abidine Ben Ali to step down and flee the country in January 2011.

The agreement, signed by Tunisian Minister of Human Rights and Transitional Justice Samir Dilou and ICTJ Vice President Paul Seils, comes as part of ongoing cooperation between ICTJ and the Tunisian government to promote transitional justice concepts and mechanisms in the country. It also aims at developing the transitional justice process.

Through its Tunisia office and with the assistance of international experts, ICTJ will help the Ministry to establish the foundations of the transitional justice process and offer technical assistance in the preparation and formation of a truth commission, a reparations program, and achieving judicial reform.

Seils commented, “ICTJ welcomes the ongoing cooperation and the Memorandum of Understanding, and looks forward to further assisting the Tunisian government and civil society in this challenging and important time of transition.”

The agreement provides ICTJ with additional opportunities to offer expert advice to Tunisian government officials as well as legislative and judicial commissions. Training and specialized workshops would also be held in Tunis and foreign trips would be organized for Tunisian practitioners giving them more opportunities to closely examine the experiences of other countries that have undergone transitions.

Cooperation would include sharing ICTJ resources in Arabic, English, and French in symposia and conferences held in Tunisia.

According to Dilo, “The main challenge in the transition toward justice is to have an effective transitional justice process in order to seek the truth, achieve reparations, reform the institutions, and ensure non-recurrence.”

The signing of the agreement comes shortly after the National Constituent Assembly received the Draft Organic Law on the Organization of Transitional Justice. Minister Dilou expressed hope that this law will be passed as soon as possible.

PHOTO: Paul Seils (left) and Samir Dilou sign the agreement on January 16, 2013. Courtesy of the Tunisian Minister of Human Rights and Transitional Justice