It has been nearly seven years since the passage of the Justice and Peace Law (JPL) in Colombia. The process continues today amidst controversies and important reflections on the direction it should take. What progress has been made and what are the shortcomings of how the law has been implemented? 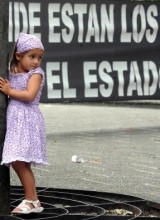 It has been nearly seven years since the passage of the Justice and Peace Law (JPL) in Colombia, a law that initiated a process through which illegal armed groups that demobilized between 2003 and 2006 are being brought to justice. The process continues today amidst controversies and important reflections on the direction it should take. What progress has been made and what are the shortcomings of how the law has been implemented?

The Justice and Peace Unit, established in 2005 by the Prosecutor General’s Office, is currently comprised of 45 prosecutors and has set up Justice and Peace tribunals in Medellín, Bucaramanga, Barranquilla and Bogotá. About 370,000 victims from all regions of the country have registered to take part in the lawsuits and over 1,000 members of demobilized paramilitary groups are being prosecuted, according to the Prosecutor General’s Office.

Through investigations and confessions, this process has shed some light on the configuration of the paramilitary structures, as well as the relationship of these groups to political leaders, law enforcement, business figures, and other sectors. Based on this evidence, the Justice and Peace Unit has recommended ordinary criminal courts open investigations into some 1,000 politicians, 916 members of law enforcement and a further 9,596 people, though few investigations have been opened.

“The country is beginning to gain awareness of what it means to investigate the massive criminal apparatus that developed thanks to the behavior of these groups. I believe the progress towards establishing the truth has been fairly significant,” says Eduardo Castellanos, president of the Justice and Peace Tribunal in Bogotá.

Shortcomings and Challenges in Justice and Peace

Implementation of the JPL has been far from perfect, however. Since it was initiated, the process has suffered critical problems including the limited competence of institutions involved in investigations and trials, the absence of a comprehensive strategy for prosecuting the complexity of the criminal structures, and the slowness of the proceedings. These, among other issues, have hindered the realization of the victims’ right to justice, truth, and reparation.

The difficulty in obtaining results is demonstrated by the fact that the Justice and Peace process has achieved only seven sentences in as many years of operation, with only 11 people convicted. However, more important than the number of sentences given, the debate regarding the JPL should focus on the impact the sentences may have on constructing the truth about the conflict and the myriad of abuses born by the citizens of Colombia.

In this sense, one of the major constraints of the JPL rests in the law’s scope of application. The JPL was mandated to regulate the investigation, trials, penalties, and granting of legal benefits only to members of armed groups organized outside the law and responsible for committing complex crimes.

“The Justice and Peace process has lacked a strategic orientation, focusing on trying individuals rather than shedding light on a social, political, and armed phenomenon which must be dismantled in this country so that those acts do not happen again,” said María Camila Moreno, director of ICTJ’s Colombia Program.

Investigation strategies must be modified to ensure different types and levels of criminal participation can also be investigated. The process must pursue members of armed groups but also political, military, and business leaders who were played a vital role in creating and expanding these groups.

In the course of the Justice and Peace process, valuable information about the structure of the criminal organizations within Colombia has been revealed and many of the key figures involved have been identified. Now, concerted action is needed from the whole legal system to ensure this information leads to the prosecution of the top leaders, the ones operating both illegally and within legal structures, including members of law enforcement and the financial and political forces that bear the most responsibility.

More information on the JPL:

Photo: A little girl stands next to a banner that reads "Where are the missing people? Let the state respond" during a march against the false positives, massacres and forced disappearences by Colombian authorities in 2009, in Medellín, Colombia. RAUL ARBOLEDA/AFP/Getty Images