Justice for Genocide: The Role of Guatemala's Civil Society

The world has turned its eyes to Guatemala, where the trial of retired generals Efraín Ríos Montt and José Mauricio Rodríguez Sánchez is drawing to a dramatic close. With a verdict expected soon, ICTJ spoke with Francisco Soto, executive director of the Center for Legal Action on Human Rights in Guatemala (CALDH). In this Q&A, Mr. Soto describes how civil society in Guatemala has been a crucial force in the long struggle for justice, and reflects on the historic significance of this trial, for both Guatemala and the world. 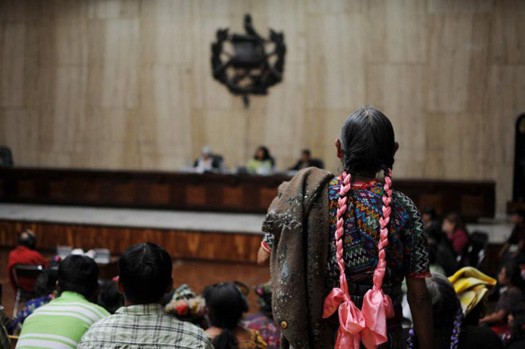 The world has turned its eyes on Guatemala, where the genocide trial of retired generals Efraín Ríos Montt and José Mauricio Rodríguez Sánchez is drawing to a close.

Civil society organizations have been deeply involved in making it possible for this trial to take place at last in Guatemala – among them is the Center for Legal Action on Human Rights in Guatemala (CALDH). Together with the Association for Justice and Reconciliation (AJR), a victims’ group, CALDH was the first to press charges of genocide in the Guatemalan courts twelve years ago against the former de facto head of state and his chief of intelligence from 1982-83 when the most brutal massacres of the rural Maya population occurred. CALDH is one of the “joint plaintiffs” [querellantes adhesivos] in the trial for genocide and crimes against humanitarian duties that is taking place Guatemala City.

To examine the significance of this trial for Guatemala and the international community as a whole, ICTJ's Marta Martinez spoke with Francisco Soto, executive director of CALDH. Below is a shortened transcript of the original podcast interview, available for streaming or download in Spanish

When did CALDH start working on this case and what were some of the main obstacles to bringing it to trial?

Francisco Soto: CALDH is an organization founded in Washington during the period of internal armed conflict; after the peace agreement was signed it moved back to Guatemala and we provided legal advice, and still do, for the Association for Justice and Reconciliation. The first lawsuit was filed in 2000 against General Lucas García’s top military officials and in 2001 another one was filed against General José Efraín Ríos Montt’s military leadership.

And what has happened since the first lawsuit was filed?

FS: At the time, the Guatemalan Republican Front was in power. General José Efraín Ríos Montt was the president of the Congress of the Republic and really [all] the Public Ministry did during those years was to take witness statements from victims and survivors and that was it, in terms of criminal prosecution as far as the government was concerned.

Basically, eight or nine years went by with no actions within due process. The Public Ministry had no intention of carrying out its duty to investigate these cases and so no progress was made. A very important development for our work, and for the process of transitional justice in Guatemala happened when Spanish judge Santiago Pedraz arrived in Guatemala to gather testimony from witnesses. That testimony was unfortunately never given—this was in 2006—thanks to a series of procedural motions by General José Efraín Ríos Montt.

After that, international arrest warrants were issued by the National Court of Spain for top military officials during that period and the topic of the crime of genocide that was committed in our country began to gain traction. After that, there was another very significant event in 2007 with the request to declassify four military documents: the Operation Victory 82 plan, the Firmness 83 plan, Operation Ixil and Operation Sophia. This process of declassifying documents took about two years, and it wasn’t until 2009 that the Public Ministry and the other parties involved in the lawsuit received copies of Victory 82 and eight pages of Firmness 83.

In regards to the documentation for Operation Sophia and Operation Ixil, there’s a report by the Ministry of Defense at the time stating that those documents disappeared from the archives of the Guatemalan Army. After that came something very important; there was a series of different attorney generals in Guatemala and while Judge Zárate was in the Public Ministry, progress began to be made on the genocide trials, the investigation for the genocide trials, and with Judge Claudia Paz y Paz, the process is culminating with this trial.

The trial has moved much faster than expected, even though other trials of this magnitude are often very long drawn out. Can you explain why? Do you think this could affect the quality of the trial or the verdict?

FS: We think the trial has indeed moved along very fast. However, all the resources for the defense of the accused have been guaranteed; victims have been able to make their statements freely, as well as experts.

Additionally, you have to take into account the series of procedural motions filed by the defense team in order to try and delay the trial. An endless number of procedural motions were filed in an attempt to delay the trial, not only during the deliberations but ever since the intermediate stage of the lawsuit. To give you an example: in 2012, between January 1st and December 31st approximately 74 motions were filed, including appeals for legal protection, motions for recusal, and appeals on grounds of infringement of constitutional rights—a whole series of motions aimed at preventing the trial from proceeding, and keeping the case stalled at an intermediate stage.

I think this has caused the trial to move along more quickly, but it’s important for the deliberations to continue and lead to a conclusion despite the whole series of legal motions that have been filed with the basic intent of delaying the trial that is now going on.

You spoke a moment ago about the defense strategy. It’s noticeable that they haven’t mounted a substantive defense, and they haven’t been very assertive or insistent during the cross-examinations. Do you have any explanation for that strategy?

FS: I think there are two issues here: one is basically that the defense has been more political than legal. On the other hand, we must remember that the defense’s political and media strategy mostly consists of suggesting that the trial is full of legal flaws. One of the ones that is being talked about is when, as part of the defense’s legal strategy, there’s a change of defense counsel, General Ríos Montt’s defense attorney. They have been trying to stop the trial from happening by means of legal motions and this political and media strategy of saying that there has been a series of irregularities. Obviously we think this is a way of trying to play down the importance of a future verdict by claiming that due process was not followed. We think that the defense team of General Ríos Montt and General Rodríguez Sánchez is taking those two lines.

How is the Guatemalan public reacting to the trial?

FS: I think it’s a historic trial in our country. It’s definitely the first time a former head of state has been tried in Guatemala for human rights violations.

There are two parallel performances going on, right? There are those who claim there was genocide in Guatemala and those who claim there wasn’t. We are really worried about the polarization of the country; we don’t think it’s the best way forward. On the contrary, we believe a court free of pressures should play an important role, in the sense that it should be a court free of pressures that says whether genocide occurred in Guatemala or not, whether crimes against humanity were or were not committed in Guatemala, or what happened during the conflict. But it must be deliberated and decided in the courtroom.

On the other hand, society must actually discuss the issue of what happened during the conflict without getting polarized like we are now.

As a society, we must talk about what happened in order not to repeat the events that occurred during those years of internal armed conflict.

When do you expect the trial to finish and a verdict to be declared?

And how might that verdict affect Guatemalan society and the country’s future?

FS: We believe that we should definitely respect the verdict, whatever it is, since there has been no pressure on the court, at least on the part of the prosecution. We believe the verdict is a watershed moment in the Guatemalan defense system. It really strengthens the justice system in our country. Seeing judges and prosecutors carrying out their role of judging all crimes, even if they were committed by really powerful people in our country; seeing the justice system starting to work, starting to show signs that it can work, is incredibly important. It definitely gives the country a stronger legal footing.

On the other hand, we believe there should be a healthy debate in Guatemalan society [about] the verdict and about what happened in our country. Above all Guatemala needs to reach agreement on social issues so that these events don’t happen again. We must resolve our problems through dialogue, we must resolve our problems in the political spaces that exist in every civilized society and not resort to violence to solve social conflicts.

We believe that reconciliation has to come through the justice system and while it’s a fact that not all the human rights violations committed during the conflict can be tried in court, there are some cases that can, definitely; others fit in the transitional justice framework, but there are some symbolic cases that can be tried. Not all of them, but we believe international support is very important as Guatemala goes through this phase of transitional justice.

Learn more about the genocide trial in Guatemala in this recent op-ed by ICTJ's Marcie Mersky.