From Force to Service: Engaging Kenyans in Police Reform

A new documentary produced by ICTJ highlights the need to reform Kenya's police force, and stresses the vital role civil society plays in conducting a thorough vetting process and the establishment of public trust in security forces. 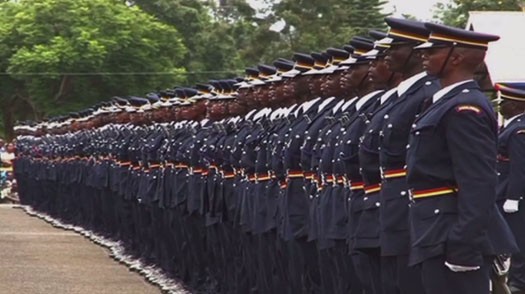 On a recent evening in Mathare, one of the largest slums in Nairobi, the crowd around the outdoor screen grew as the night became darker. In poor and overpopulated areas like Mathare, streets have become increasingly dangerous, a feeling of insecurity only augmented by widespread mistrust of police forces, many of whom have been involved in shootings, robbery with violence, rape, and even extrajudicial killings.

Yet on December 10, 2014, over 200 of Mathere’s residents gathered to watch a new documentary produced by ICTJ, From a Force to a Service: Police Reforms – Vetting in Kenya. The film highlights the need to reform the law enforcement body in light of its history of human rights violations and stresses the vital role civil society plays in building a trustworthy and accountable police force for Kenya.

“The police in Kenya have been used to suppress opposition and are guilty of numerous violations throughout Kenyan history, many of which were clearly documented by the Truth, Justice and Reconciliation Commission,” said Chris Gitari, director of ICTJ’s office in Kenya. “We hope the ongoing police vetting process will result in an inculcation of a culture of human rights, transparency, accountability, and efficiency in the police system.”

After the screening, those who attended the event shared their feelings of mistrust towards the force meant to protect them, and took part in further discussions around how to report abuses by police officers, how the officers will be dealt with if they are found guilty, and how those who report abuses would be protected against the possibility of retaliation.

The Role of Police in the Post-Election Violence

Police use of violence increased in Kenya after the December 2007 presidential elections, when a period of political unrest erupted, and allegations of electoral manipulation intersected with ethnic tensions. Fighting, riots, sexual assault, rape, and other acts of violence swept the country, ultimately resulting in an estimated 1,100 deaths, extensive destruction and widespread displacement. In several cases, perpetrators of such crimes –including murder and rape– were police officers.

These events strengthened the push for police reforms in the country. The National Police Service Commission (NPSC) was established in 2012 as part of several measures aiming to ensure that police officers professionally uphold the rule of law. Central to this reform was a vetting process of active-duty police officers, which began in December 2013. During the review process members of the police corps were scrutinized for suitability and competence to continue serving.

As of January 2015, 198 senior police officers have been vetted. Out of the 198 vetted, 10 were found unsuitable to continue serving in the police force. Seven of those officers have successfully appealed and will be vetted again.

“The vetting process began at the highest ranks but has been characterized by a lack of public engagement,” said Gitari. This has resulted in civil society not providing NPSC with the necessary information, especially on violations required to declare the suitability or unsuitability of police officers.

“Kenyans need to be aware that their reports and claims are essential for this process to be legitimate and successful,” he added.

With the release of the film From a Force to a Service: Police Reforms – Vetting in Kenya, ICTJ aims to promote participation of civil society in the vetting process by explaining how they can submit information on police officers to be used in the review. Poor and overpopulated areas where police violence has been most intense—such as Kibera, Mathare, and Mukuru Kwa Njenga—have been a priority for the dissemination of the film, done in partnership with the Kenyan NGO Grace Agenda. During the month of December, public screenings were held in those communities, where the documentary sparked public debate and demand for further information about how to engage in the vetting process.

“This documentary is a tool that will help erode the current apathy where the public is least bothered to engage with the vetting process,” said Jackie Mutere, director of Grace Agenda. “It will help restore public confidence in the process and make them realize that it is their civic duty to engage with processes that are meant to ensure that suitability and competency in public institutions, including the National Police Service, is restored.”

Among the audience at the screenings there were also members of the police. A police officer who attended the event in Mukuru kwa Njenga was impressed by the language and clarity of the documentary. “Despite being an officer, I did not fully understand what the vetting process entailed; but now I do after watching the documentary,” he said.

Women have been targeted by police violence in Kenya and they have specific demands and needs when it comes to interacting with officers. During the post-election violence of 2007-08, many women in the areas of Kibera, Mathare, Mukuru Kwa Njenga and more broadly across the country were victims of sexual violence. Kenyan police officers were widely implicated in these incidents, either by sexually assaulting women or failing to fulfill their duty to investigate such cases during the crisis and up until now. Yet not a single case has been prosecuted, and the State has neither acknowledged these actions nor provided reparations to the victims.

An ICTJ report conducted by our Gender Justice unit analyzed the disturbing impact of police attitudes towards sexual and gender-based violence in Kenya. Of the 48 women interviewed, only nine had reported their sexual assault to the police, but most held back due to fears about how they would be treated.

“Police officers who are implicated in incidents of sexual violence should be thoroughly vetted, and those taking statements from victims—including police officers, lawyers or other legal authorities—should receive detailed training on how to conduct the interview without risking re-traumatization,” said Amrita Kapur, Senior Associate with ICTJ’s Gender Justice program.

In 2014, ICTJ held other training workshops to enhance public awareness of Kenya’s police vetting program and how to engage with it, as well as to provide concrete recommendations to improve its capacity to reveal police misconduct related to sexual violence.

In the coming weeks, 77 members of the newly established Internal Affairs Unit and 182 police officers of the ranks of Assistant Superintendent of Police will be vetted by the NPSC. Outreach initiatives such as this documentary will hopefully contribute a better understanding of the procedure by the civil society organizations, which would allow for more victims of police violence to be able to file complaints.