Lessons of De-Baathification in Iraq 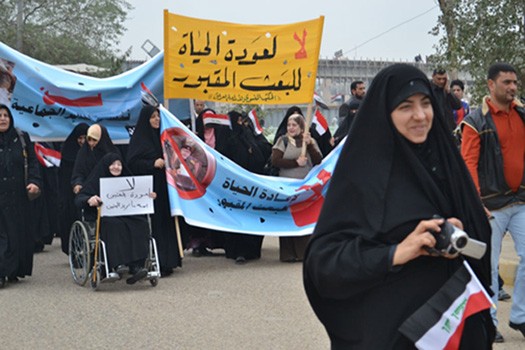 Photo: A demonstration in Basra on January 26th, 2013. A woman holds a sign that reads: "No for return of Baathists." ABDULKAREEM ALAMIRY/RFE/RL

From its inception in 2003, the process of de-Baathification – the purge of Iraq’s state institutions of Saddam Hussein’s Baath Party members in the aftermath of the US-led invasion - polarized Iraqi politics and led to the collapse of many state functions. Today, Iraq continues to be haunted by its legacy.

An examination of Iraq’s flawed vetting experience is presented in a major new ICTJ report, titled "A Bitter Legacy: Lessons of De-Baathification in Iraq."

The dramatic collapse of regimes in the Middle East and North Africa (MENA) has raised many important questions on policy, justice, and accountability. Central to these debates is how states will choose to deal with former regimes’ security and government apparatuses.

For places like Tunisia and Egypt, where major efforts are underway to dismantle political structures of former regimes, Iraq’s experience of de-Baathification holds valuable lessons.

In Saddam Hussein’s Iraq, membership in the Baath party was the standard requirement for state employment, creating a hegemonic party with deep influence in all of Iraq’s public institutions.

This influence was felt acutely through its liberal use of state security apparatus in extrajudicial killings, enforced disappearances, torture, and other grave human rights violations during three decades of rule.

After the fall of Saddam Hussein’s regime, the purge of Baath Party members in Iraq became the most controversial example of large-scale and politically based dismissals in the Middle East.

In the effort to purge the Baath Party’s influence in the country, the de-Baathification process adopted a ‘presumption of guilt’ approach, which deprived the state of much-needed expertise in the political, judicial, educational, military, and other spheres. The exodus and exclusion contributed to severe instability in the country that is still felt today.

“After nine years of controversy, the de-Baathification story has not yet finished,” said ICTJ Program Director Claudio Cordone. “We hope that Iraq’s experience will enable other countries in MENA to make wiser choices.”

ICTJ’s report concludes with recommendations on effective vetting. For society to move forward after decades of abuses, the report stresses that individuals must be assessed based on their conduct, not their former party membership, and they should also have the full opportunity to answer allegations against them.

An Arabic version of the report is available here. Learn more about our work in MENA in the ICTJ Program Report.
Middle East and North Africa
Iraq
Institutional Reform