The trial of Thomas Lubanga before the ICC has the potential to set a critical precedent regarding the right to reparations. In our latest podcast ICTJ's Director of Reparations Ruben Carranza discusses recommendations ICTJ submitted to the ICC concerning the implementation of reparations. 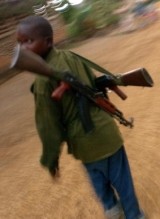 The International Criminal Court (ICC) is expected to deliver its first sentence in the coming weeks. Last week the ICC prosecutor recommended that Thomas Lubanga, a former warlord convicted of using child soldiers in the ongoing armed conflict in the DRC, serve 30 years in prison for these crimes—less if he offers a "genuine apology" to his victims and to the communities destroyed by the brutal rebel group under his command.

This trial, historic as the first to reach a verdict before the ICC, has the potential to set another critical precedent in the fight against impunity for mass atrocity. Acting under the Rome Statute requirement that the court “establish principles relating to reparations” for victims of war crimes and crimes against humanity, judges are in the process of deliberating whether Lubanga’s victims who participated in the trial proceedings will receive compensation for the harms they suffered.

Aside from being the “test case” of the court’s reparations mandate, the Lubanga sentence presents unique challenges in this regard. The verdict ruled on a narrow set of crimes; only a small number of victims of forced recruitment are eligible to receive compensation from the court. But this is arguably a mere fraction of those who suffered human rights abuses at the hand of Lubanga or his subordinates, victims who should be able to claim the right to reparations under both international and domestic Congolese law.

Investigators also failed to recover any assets belonging to Lubanga that could provide funding for compensation efforts, leaving this burden on state supporters of the ICC through the court’s Trust Fund for Victims.

Grappling with these and other challenges and questions, the ICC invited submissions from legal and reparations experts before the decision is issued. ICTJ’s submission recommends the case formally acknowledge and allow access to the proceedings to all victims of violations, the consideration of collective as well as individual reparations, and a mapping and needs assessment, among other considerations.

Read a summary of ICTJ’s recommendations. The full submission can be found here.

In our latest podcast, ICTJ’s Reparations Program Director Ruben Carranza discusses further the challenges of this case in testing the reparations mandate of the ICC, the recommendations ICTJ’s submission puts forth, and the lessons the ICC can learn from other courts around the world who have faced the task of ruling on reparations.

Listen to the podcast

National Congolese courts have also ordered the DRC government pay compensation to victims in at least eight cases where those convicted were members of the Congolese military. However no payments have been made in any of the national cases to date—an indication of the judicial system's ability, or lack thereof, to enforce the law.

Following field research in 2009 and 2010, ICTJ produced a report in French entitled Judicial Reparations for the Victims of Gross Violations in the Democratic Republic of the Congo, detailing the challenges of enforcing court-ordered reparations. We have now produced a briefing paper outlining the challenges and recommendations discussed in the report.

This paper proposes additional steps the government, international community, victims and civil society organizations can take to address the failure of the DRC to fulfill outstanding orders for reparations, as well as broader measures that can be implemented, such as non-judicial reparations measures.

Briefing Paper: Judgment Denied: The Failure to Fulfill Court-Ordered Reparations for Victims of Serious Crimes in the Democratic Republic of the Congo

Photo: BUNIA, CONGO - JUNE 10: A child soldier walks the streets June 10, 2003 in Bunia, the provincial capital of Ituri province in the Democratic Republic of Congo. Photo by Spencer Platt/Getty Images